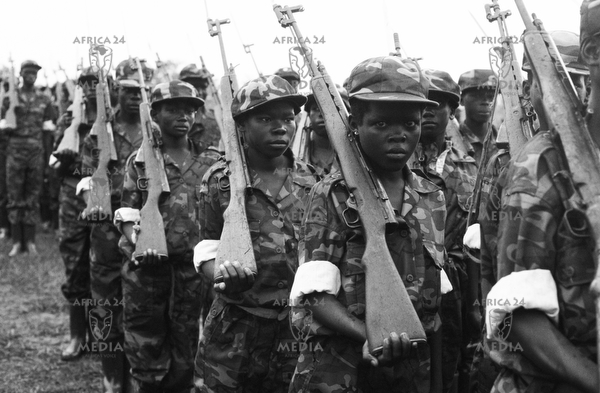 Child soldiers in Africa are often assumed to be a new phenomenon, linked to the spread of so-called ‘new wars’ and ‘new barbarism’ in the civil wars which swept across the continent in the 1990-2000s. The defining images of the child soldier in today’s humanitarian-inflected discourse are those of the ragged young rebel boy in flip flops with an AK-47 in downtown Monrovia, or the kidnapped Acholi children seized from their families by Joseph Kony’s Lord’s Resistance Army in Uganda. New research, however, is beginning to challenge this assumption, and the idea that child soldiers are always either simply ‘victims’ or ‘perpetrators’.

There is in fact a much longer and deeper history of child soldiering in Africa than has previously been acknowledged. Our seminar groups have been exploring this history by analysing evidence for African children’s recruitment into British forces in the Second World War, looking in particular at the memoirs of former child soldiers who fought in Egypt, Burma and India. Although these memoirs need to be treated carefully, as they are adult recollections of children’s experiences, they reveal striking differences between contemporary and historical accounts of children’s experiences of war.

British armed forces have a long, and on-going, tradition of ‘boy soldiers’.[1] This tradition was exported to colonial armies in Africa, where it interacted with local traditions of youth military training and service as a key step towards adulthood.[2] During the Second World War, some one million Africans served in British armed forces.[3] Although adult ‘able-bodied men’ were preferred for service, the rapid expansion of colonial forces meant that recruiting standards were often not strictly enforced and younger boys were welcomed, or even deliberately targeted for service. Educated, literate children were sufficiently needed for more technical roles in the Signal’s regiments that the age of recruitment there was formally lowered to fifteen to allow for direct recruitment from schools.

Rev. John Mandambwe, from Malawi, recalled how he and his classmates were made to stand against a mark on the wall, and anyone taller than the mark was conscripted into the King’s African Rifles. Although his parents protested that he was only thirteen years of age, he was still forcibly conscripted.[4] Hama Kim, from Nigeria, on the other hand, was a volunteer, showing considerable agency in inveigling his way in to the Royal West African Frontier Force, despite being told that at thirteen years of age he was too small.[5] The category of ‘volunteer’ however could be flexible, as one Botswanan former child combatant noted that whilst he volunteered to prove himself a man, others were ‘volunteered’ for service by local chiefs.[6]

Service in colonial armies allowed these children to travel, meeting different races and cultures. Many showed limited understanding of the political causes of the war, but appeared happy to be fighting alongside British and other colonial soldiers. Perhaps surprisingly, most have positive memories of their service, remembering the camaraderie, and their pride at becoming effective soldiers.

One clear difference between these Second World War memoirs and today’s child soldier narratives is the lack of trauma discourses. As Hama Kim put it, ‘soldiers from East Africa were worried about their wives and children; we didn’t as we were very young’. Although they recount the terror of battle and seeing friends die, the former child soldiers do not explicitly speak of the psychological trauma they endured, nor indicate that it has significantly marred their post-war lives. These child combatants clearly show that they were able to either build themselves military careers, or demobilize and successfully reintegrate into society.

These historical examples of child soldiering challenge many of the contemporary assumptions made about children’s participation in war: they show that children were not always forcibly recruited, and that many voluntarily joined colonial armies to prove themselves as men, or because they were attracted to the perceived ‘glamour’ or attractions of a soldier’s life. Whilst we today are conditioned to take a negative perspective on child recruitment, for many of these children enlistment was a rational choice – it provided employment, a decent wage, and the opportunity for personal advancement.

Ideas of childhood themselves are historically and culturally contingent, and today’s human rights discourses impose Western values of childhood – the so-called ‘Straight 18’ position under which anybody under eighteen years of age is regarded as a child – which do not fit African cultures or process of social maturation, where boys can be initiated into ‘manhood’ in their mid-teens but not regarded as fully ‘adult’ until they have their own children and households.

These memoirs reveal the need to analyse historical patterns of children’s employment in war to better understand today’s child soldier crisis, but also the tensions between the historian’s desire for objectivity and emotional reactions to what is today recognized as a war crime: were these boys heroes, victims, or just soldiers? And who has the right to judge? These are the questions we will be investigating in our future analysis of the history of child soldiering in Africa.