From the perils of writing global history, to a global tale from 1623, here are this week’s top picks in imperial and global history.

Bonfire of the Humanities

Proponents of globalizing history have persuasively argued that history has remained “Eurocentric,” but Hunt rightly asks whether the contemporary fashion of writing history across large spaces does more than drastically expand the canvas for historical depiction. “Is globalization a new paradigm for historical explanation that replaces those criticized by cultural theories?” she asks. It may enlarge the scale of study, focusing on long-distance trade, far-flung empire or cross-border war, but such a perspective could merely draw greater mountains of facts in view, without explaining what they mean or why they matter.

What global history emphatically does not prove is that the classic authorities for interpreting the past have become obsolete, especially since Karl Marx himself described the phenomenon now called globalization. Hunt’s starting point is different. She argues that because she and her fellow cultural historians so irreparably damaged the social theories that commanded history from Gibbon’s time to our own, the options for doing history now can only take one of two forms. One is to do without any reigning “paradigm,” which Hunt stipulates cultural history never had—beyond a general commitment to recapturing meaning, without agreement on how to interpret it. The other is to invent a new paradigm. Hunt’s fear is that globalization, because it foregrounds anonymous processes once favored by social historians, will end up preferring the sorts of frameworks they once relied upon. Globalization could, that is, make obsolete the insights of the cultural revolution Hunt originally sponsored, while doing nothing to lead historians beyond the limits she now thinks are intrinsic to a global focus. [continue reading]

C-SPAN Book Discussion on Slavery, Race, and Conquest in the Tropics

Professor Robert May talked about his book, Slavery, Race and Conquest in the Tropics: Lincoln, Douglas, and the Future of Latin America, about how Abraham Lincoln was working to prevent the spread of slavery into the Caribbean, and Central and South America. The spread of slavery was debated regularly during the Lincoln-Douglas debates. Douglas argued the country should expand into these areas and settle them as slave states. Lincoln was convinced the best way to end slavery was to prevent it from spreading any further. 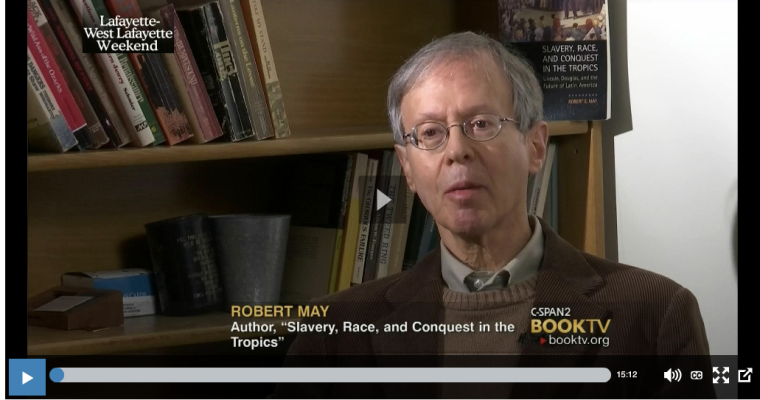 For 125 years, some small portion of America’s fire trucks have come from Columbus, Ohio. That’s where the family-owned Sutphen Corp. produces shining red masses of steel and aluminum, loaded with ladders and tanks, the kind of vehicle that towns buy as a promise to keep citizens safe. But when the recession hit in 2008, Sutphen knew that the United States wouldn’t be enough. “We saw that we were totally dependent on the U.S. economy, especially municipal funding,” says Ken Creese, the company’s director of sales and marketing. Sutphen’s orders had dropped by some 40 percent, and they were starting to lay people off. They needed new markets, stat.

To find them, the company looked to a country better known for selling stuff to America rather than buying it: China. They hired a vice president for international relations, began responding to solicitations by local governments, and quickly started filling orders. Now, about 11 percent of the 250 trucks Sutphen makes per year sell overseas — not only in China, but Venezuela, Colombia and Peru. Just last week, the company signed a $3.8 million deal with a Chinese fire department. [continue reading]

Deep in the papers of the English East India Company, kept in the British Library in London, lies one of the most astonishing lists I’ve ever seen. It’s a particular kind of list, which will be familiar to many. It’s a list of goods held by someone at their death, just like the probate inventories used all the time by English social historians and genealogists. It dates from 1623, and is for a man called John Millward. In fact, at first it looks pretty mundane. And yet, on closer inspection, the inventory is truly extraordinary.

Millward was one of a very small number of English men (and some women) who lived completely globalized lives. His age, the early seventeenth century, was the first one of truly wide-ranging global interaction and exchange. True, earlier times had seen some remarkably cosmopolitan people. Ibn Battuta, for example, or Zheng He, or Marco Polo. Commerce and ideas spread across continents and oceans. Romans traded in India and heard of the existence of China. Spices found their way from Indonesia to Europe. The Silk Road linked east and west, as did Islam and – to a much lesser extend – Christianity.

But the seventeenth century was different. Not, perhaps qualitatively, but quantitatively. The European maritime voyages of the fifteenth century had opened up the world to that hitherto obscure peninsular. The silver mined in the Americas suddenly allowed them to trade effectively in Asia. The number of truly global commodities exploded: the pattern usually being that a luxury item that had enjoyed extensive Asian markets suddenly expanded its reach across to West Africa, Europe, and the Americas. Goods like Indian cottons, coffee from Yemen, saltpetre from Bihar, porcelain and tea from China. [continue reading]