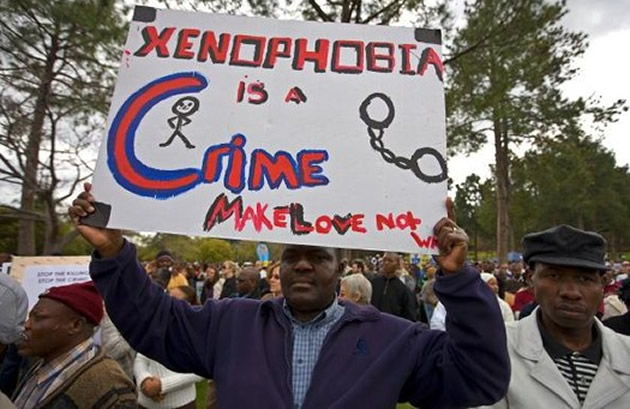 Over the past several weeks, a new wave of xenophobic violence has swept across South Africa, beginning in Durban and quickly spreading to Johannesburg and its surrounding townships. The targets are makwerekweres, a derogatory term used for foreigners, in reference to the “babble” they speak. They are Zimbabweans, Mozambicans, Nigerians, Somalis, Bangladeshis and other foreign nationals. Initial violence in Durban was sparked by the remarks of Goodwill Zwelithini, the king of South Africa’s largest ethnic group, the Zulus, who reportedly called on foreigners to “pack their bags and go back to their countries.”

In the following weeks, the violence claimed the lives of seven people and turned thousands more into refugees. Media images depicted scenes of terror, displacement and hatred: foreign-owned shops looted and ransacked; tent cities hastily assembled for refugees; foreigners boarding buses back to their home countries; and even the brutal stabbing of Mozambican Emmanuel Sithole in Johannesburg’s neighbouring township of Alexandria. Yet these images are not new for South Africans. Just earlier this year, another episode of xenophobic-induced looting and violence occurred Soweto. Recent violence particularly calls to mind scenes from just seven years ago, in May 2008, when 62 foreigners were killed and thousands displaced in the worst xenophobic attacks in the country’s post-apartheid history.

These episodes of violence are not sporadic. They represent long-simmering anti-migrant sentiments that have been increasing in the country since the early 1990s. As apartheid collapsed and South Africa opened its borders to foreign migration, many within the country found new scapegoats for their dissatisfaction with democracy’s failed promises. They blamed foreigners, rather than whites or the government, for high unemployment and scarce resources.

But these sentiments can be traced back much further than 1994 – fear or hatred of foreigners has a long history in South Africa. In fact, the country’s history over the last several centuries reads as a long list of various waves of migrants entering the country and vying for dominance; “non-native” South Africans do not only include Somalis and Zimbabweans, but also the English, Afrikaners, and even the various Bantu-speaking tribes such as the Zulu and Xhosa, who migrated to Southern Africa around 500AD. Stories of poor Afrikaners looting British-owned shops in 1914 are startling precursors to the country’s most recent attacks.[1]

Given this long history, it is perhaps not surprising that historical arguments have been mobilised on both sides of the xenophobic debate, to explain no only why South Africans perpetrate violence against others, but also why they should not. Proponents of the latter repeatedly cite the involvement of or support from other African nations in South Africa’s anti-apartheid struggle, whose citizens now residing in South Africa have been the target of recent attacks.

Numerous historical legacies are reverberating through South Africa today that contribute to xenophobic sentiments and actions. During apartheid, the country was strategically isolated from the rest of the world, both by its leaders who strictly censored and limited global cultural and information flows, and by the leaders of other nations who applied punitive economic, cultural and sporting sanctions against the apartheid government.

The growing influence of globalisation through the later twentieth century was largely lost on South Africa – a country which only permitted television in 1976, and which even then only allowed programmes aligned to apartheid ideology. In schools, children were taught the history of the West or Europeans in South Africa, rather than the recent decolonisation or continuing liberation struggles of other African nations. This policy applied to both white and black education systems. Under Bantu Education, my research assistant recounted, students were strategically shielded from the history and politics of their neighbouring states. In a study conducted with Nigerians and Congolese living in South Africa, informants cited this ignorance as a central factor in hostile attitudes towards foreigners today.[2]

Simultaneously, South Africa was cast during apartheid as a place of exceptionalism, a country whose European population and level of civilisation rendered it distinct from others on the continent. Africa was depicted as a homogenous, dark and undifferentiated place to which South Africa did not belong.

Yet this thinking has not shifted enough since the end of apartheid, and contemporary references to other African countries are frequently derogatory. Foreigners today are often blamed for the country’s high crime rate, or for bringing disease into the country. In 2013 during a discussion of South Africa’s controversial e-tolls on motorways in the province of Gauteng, President Jacob Zuma cast South African apart by stating, “We can’t think like Africans in Africa. It’s not some national road in Malawi.”

In his latest book, Jonny Steinberg highlights how during apartheid, blacks from different African nations lived together in townships in solidarity. Migrants from throughout Southern African who came to work on the country’s mines often integrated with locals, learning indigenous languages and marrying South African women.[3] All blacks regardless of their home country, argues Steinberg, were equally excluded. As journalist Ryan Brown comments,

For decades…South Africans of every color were taught to draw rigid boundaries around identity. Stark racial divisions were inscribed into nearly every element of life, from the hospital one was born in, to the jobs he could acquire, to the cemetery where he would be buried. The end of apartheid didn’t end those divisions, it merely displaced them — South Africans on one side, foreigners on the other.

Steinberg agrees, stating, “Perversely, xenophobia is a product of citizenship, the claiming of a new birthright. Finally, we belong here, and that means that you do not.”[4]

During apartheid, violence was commonly used as a way of policing the boundaries of exclusionary citizenship. The brutality of apartheid ascribed violence in South African society, and fostered a culture in which violence is regularly used to solve conflicts, gain power or inflict punishment.

As recent events have demonstrated, violence is still used as a method of demarcating insiders from outsiders or as an expression of prejudice. As Ranjeni Mumusamy lamented in the wake of this month’s attacks, “Our default position whenever we are under pressure is to resort to violence…We came from violence and we will always go back to it.” Even the images of xenophobic violence over the last decade are similar to those from apartheid. In 2008, a Mozambican man was “necklaced” – a form of execution infamously used during township insurrections in the mid 1980s to punish informers, gangsters, and others deemed not to belong to the community.

For Steinberg, the similarities between the violent policing of citizenship during and after apartheid are particularly stark. Speaking of violence against Somalis in 2008 he writes,

It was as if South Africa had reeled back in time and was replaying a story long past, but a little differently now, the protagonists not quite the same… The crowds back then had sung freedom songs that spoke of heroes returning from exile…Now, more than two decades later, those old freedom songs were dusted off once more. But the words were different. Instead of condemning apartheid, they condemned foreigners for the jobs and houses and women they were stealing.[5]

Despite these historical legacies that may predispose South Africans towards disliking foreigners – and expressing their mistrust or hatred through violence – there are also historical factors that can be used to argue for a more inclusive post-apartheid South Africa.

South Africa is indebted to many others in the continent who provided essential support during the anti-apartheid struggle. At an anti-xenophobia march in Johannesburg last week, signs lifted above the heads of the thousands gathered made clear appeals to the vision of an inclusive, peaceful South Africa set out by its most infamous struggle heroes. One poster displayed the opening lines of the Freedom Charter, drafted by the ANC and its allies in 1955, stating, “We, the People of South Africa, declare for all our country and the world to know: that South Africa belongs to all who live in it.” Another sign, held up by school children watching the passing march, declared, “Madiba taught us better”. The march’s participants also sang famous struggle songs, and the old liberation cry of Amandla, Awethu! (meaning power is ours) was heard again and again.

Over the following weeks, South Africa will continue to grapple with xenophobia and its multifaceted causes. While the historical legacies of colonialism and apartheid may paint a gloomy picture for South Africa’s future, protestors gathered at Thursday’s march sent a clear message, drawing on a very different narrative of South African history: one of activism and overcoming adversity. We defeated apartheid, declared the march’s leaders, and so too will we defeat xenophobia.

[1] Hermann Giliomee, The Afrikaners: Biography of a people (Charlottesville: University of Virginia Press, 2003), 383.

3 thoughts on “Xenophobia in South Africa: Historical Legacies of Exclusion and Violence”