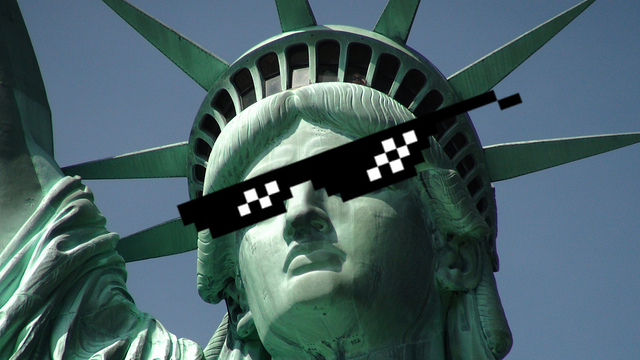 What does Taylor Swift have to tell us about the nature of imperial crisis? How can DJ Khaled inform our understanding of revolutionary consolidation? We know Beyoncé can shed light on current events – that’s clear – but what can Queen Bey explain about the human rights consequences of nineteenth-century transatlantic religious reform movements?

More than you might expect. I teach the history of the early United States in the world, and over the last few years I’ve adopted a pop-flavored shtick to help my students and I as we investigate America’s transnational, global, and imperial history. I pair each class meeting with a piece of modern popular music, creating a playlist as the semester goes along, so that by the end students have a set of sonic references for the course’s topics. The result is a historical mix-tape that, given a friendly hearing, helps the big histories make more sense – or at least draws a cathartic chuckle at the end of an intense lecture.

I started doing this just for fun. It was my attempt at emulating my colleagues teaching 20th-century history, whose use of period-appropriate music I saw enrich their classrooms. Now, I’m all for including a hearty Whig Party campaign song or a sea chanty – but they have a tendency to kill momentum in an undergraduate crowd. So I chose an easier path, loosely tying themes of globalized American history to top 40 hits. To my surprise, what began as a self-indulgent experiment in dubious musical taste has steadily become a pedagogically useful crowd-pleaser (though still dubious and self-indulgent).

The main problem the tunes help solve is one of orientation. American students, in particular, often come to my classes expecting an encounter with a national history they know well (sometimes far too well) already. They find some familiar people and events in my classroom, but in startlingly unfamiliar, and much more complex, contexts. That defamiliarization is intentional – a primary benefit of taking transnational perspective is the critical thought it provokes – but widening the field to situate Americans’ stories within the entire world can also overwhelm at times. The pop songs provide a friendly opening for discussions on difficult topics, as well as a potential hook on which to hang unraveled course themes, keeping the threads slack and untangled as we fly through decades of revolution, slavery, revival, and frenetic capitalist development.

So how does this work in practice? It’s perhaps best to work from a recent example, the playlist for an undergraduate lecture course I taught this past spring (HIST380D: Global Early American Republic: Revolution, Slavery, Capitalism).

The oeuvre of Taylor Swift framed the early part of the course, from the mid-18th-century global conflict between Great Britain and France through to then uneasy beginnings of the American nation-state. T-Swift’s paean to youth’s freedom, “22,” sat in ironic juxtaposition with George Washington’s first step onto the world stage at Jummonville’s Glen in his twenty-second year. “Blank Space” then followed on a lecture on the growing incompatibility between colonial and metropolitan views on the imperial relationship. Needless to say, the end of the War of Independence was marked with Tay-Tay’s anthem to confident separation, “We Are Never Getting Back Together.”

Not every unit of the course was so tightly bound by one artist’s works. Sometimes I tried to choose a track that exemplified something about the feeling the historical characters’ might have been experiencing in that moment. DJ Khaled’s swaggering “All I Do Is Win” thus became a theme for Andrew Jackson’s bloody victories over native resistance and British invaders at Horseshoe Bend and New Orleans, respectively, while Freddie Mercury’s and David Bowie’s duet in “Under Pressure” helped explain the anxiety of the 1837’s transatlantic economic downturn (“pressure,” not panic, was how contemporaries first described the feeling of impending financial failure).

Other tracks made an appearance because they seemed to fit within the historical arc being discussed, or just reflect it in some way. For example: Beyoncé’s “***Flawless” is a complex piece, open to many readings; I put it in dialogue with a week on the international reform movements that grew out of the ferment of the Second Great Awakening (and not just because it samples Nigerian writer Chimamanda Ngozi Adichie’s famous TEDx talk on global feminism).

Now, none of these tracks worked perfectly, and some didn’t work at all. The past remains a foreign place, no matter how much autotune gets involved. Still, by mid-semester students were trying to guess what each lecture’s outro would be, and offering suggestions for appropriate historical musical analogy. As we closed the spring reviewing and discussing the course’s themes, they referenced earlier weeks’ topics by song, and asked for a playlist as part of their study materials.

I’d be the first to admit that these kind of acoustic analogies don’t resonate with every sort of course, nor with every audience. Tone matters, too. The music in my class this spring was offered with a clearly telegraphed tongue-in-cheek, and carefully framed as an opportunity for playing at historical analogies and historical questions – not giving answers. But if you’re looking for something to spark discussion, few minutes of amateur DJing each week can indeed be much more than merely an entertaining diversion. Who knows? Maybe the tyro historians in your class just need to hear that new sound you’ve been grooving on to get going on their own masterpieces.