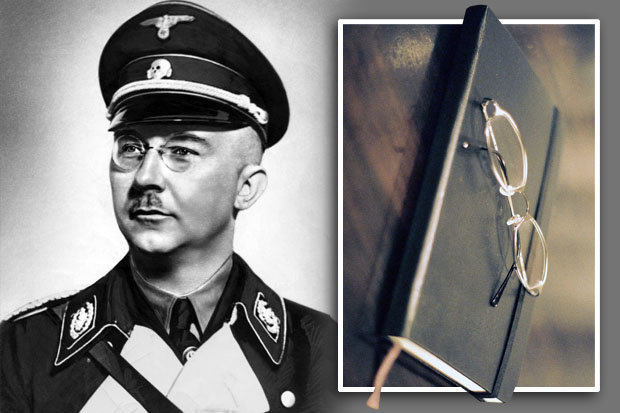 British tabloids like The Sun, Daily Star, Daily Express and Daily Mail are currently agog at the news that Himmler’s diaries have been discovered in Russia, having learned that their German equivalent Bild is serialising excerpts (behind a paywall) of a remarkable discovery by German and Russian historians in the Russian archives.

So far, only Sven Felix Kellerhoff, the history editor at Die Welt, has offered properly grown-up commentary and avoided falling into the trap of over-sensationalising the find. Most of the British tabloids, by contrast, have evidently misread the text of the story in Bild and are now passing on a number of confusions.

Contrary to the Sun’s headline that “Newly discovered diary reveals bloodlust of top Nazi Heinrich Himmler… who almost fainted when a Jew’s brain splattered on his clothes”, echoed in the Mail’s headline as well (both were sourced from the same reporter in Berlin), this isn’t in the newly discovered diaries at all, which don’t include new material from 1941, but is well-known from testimonies about Himmler’s visit to Minsk in August 1941 that have been available for decades.

The newly discovered diaries are in fact Himmler’s appointments calendars for 1938, 1943 and 1944. Until 1991, only a few of these Dienstkalender were known to historians, and many were missing. After the former Soviet archives were opened, several hitherto missing appointments diaries were discovered in the so-called ‘special archive’ in Moscow, leading to the publication of a well-received critical edition in 1999 of the Dienstkalender for 1941 and 1942. I was lucky to snap one up from a bookstore in Berlin back in 2002; since then I’ve seen secondhand prices rise as high as $300. More recently, Himmler’s appointments diary for 1940 and 1945 have been published, the latter edited by the historians who brought the Höfle Telegram to our attention, Peter Witte and Steven Tyas. As Kellerhoff notes, David Irving has digitised or transcribed Himmler’s pocket diaries for 1935, 1937 and 1939 on his website; similar Taschenkalender were used in the edition of the 1941/2 diaries.

Himmler’s movements in 1943 and 1944 are hardly entirely unknown from other sources, including the surviving papers of the Personal Staff RFSS as well as parallel materials that ended up in the Bundesarchiv Dahlwitz-Hoppegarten. Based on the use of sources such as these by historians like Christian Gerlach, one of the co-editors of the 1941/42 Dienstkalender, back in May 2011, we refuted a claim by Holocaust denier Carlo Mattogno that contrary to eyewitness testimonies from survivors, there was no proof that Himmler had visited Sobibor in early 1943. In fact, a travel schedule showed that a visit by Himmler to the Lublin district on 12 February 1943 included a trip to ‘the known place’. We reiterated the point in the HC white paper published in December 2011. Other sources further confirm Himmler’s presence at Sobibor, not least a remark in a letter regarding the promotion of Christian Wirth mentioning Himmler’s recent visit to Sobibor.

The Bild serialisation confirms this, publishing part of the Dienskalender entry for 12 February 1943:

The official designation for Sobibor was SS-Sonderkommando Sobibor; the camp was located in Chelm county, often renamed Cholm by the Germans. Thus, three separate Nazi sources confirm Himmler’s visit to Sobibor in early 1943, two of which pinpoint 12 February 1943 as the exact date.

Unfortunately, British tabloids then proceeded to garble and mix up the words written after this by the Bild journalist with the ‘diary entry’. Contrary to the Daily Mail, the appointments diary does not write of “witnessing the ‘effectiveness’ of the diesel engines at the Sobibor death camp in Nazi occupied Poland where 400 people were put to death for the exhibition. In total some 250,000 people were gassed in the camp, most within two hours of arrival.” The Bild journalist was the one who mentioned ‘effectiveness’, not the diary. Nor did the Bild journalist mention diesel – that was the invention of the British reporter writing in Berlin, who evidently did not know that eyewitnesses from Sobibor identify the killing engine as petrol-driven.

So Holocaust deniers can calm down for the time being, whether they wanted to jump up and down and point to the reference to diesel (which is not documented) or they wanted to get into a tizz about a document that placed Uncle Heinrich in direct connection with gassing.

That leaves only the ‘why now?’ question. The discovery of the appointments diary was made by the German Historical Institute in Moscow, who for the past few years have been working together with the Russian archives to locate and publish any German documents that might have been buried away in hitherto inaccessible archives, in particular the Russian state military archive at Podolsk. Unlike the Communist Party-run ‘special archive’ in Moscow, which opened its doors in 1991, the military archive in Podolsk has been almost entirely inaccessible to western researchers, with only a handful of historians (among them Hannes Heer and Anthony Beevor) granted access since the collapse of communism. Since the Russian state has been vigorously digitising and publicising materials from Podolsk relating to the Great Patriotic War on websites such as pamyat-naroda.ru (‘memory of the people’) for the past five or so years, the request for access was successful.

The results of this search have been digitised and uploaded to a website, German Documents in Russia, since 2015, kicking off with a collection of captured First World War documents as well as numerous files from the Armed Forces High Command, Army High Command and Army Group Centre. Himmler’s diaries were discovered in Podolsk. Contrary to the Mail, they were not “filed under Dnewnik – Russian for diary”, another misreading of the Bild story, but were in record group 12493 of the captured documents collection, going by the numbering on the folder cover marked ‘dnevik reikhsfiurera gimmlera’. Since record group 12450 is OKW, 12451 is OKH and 12454 Army Group Centre, and since the digitisation project released record group 12480 a short while ago, the timing of the discovery makes perfect sense if as is likely, they are slogging through the collections while processing and digitising them for archival preservation purposes.

Time will tell what else might be unearthed from Podolsk; the Red Army clearly held on to thousands of files (more than 800 from Army Group Centre alone) of captured German records without passing them onto Soviet war crimes investigators or civilian Party authorities for historical research. Indeed, record group 12480 was compiled by the GRU, the Soviet military intelligence service, who will surely have had a strong influence in keeping some of these materials classified for so long. That leaves the FSB, inheritors of the KGB archive, as the last possible repository of otherwise lost records from the Second World War.

With a critical edition of the Himmler appointments diaries by Matthias Uhl and Dieter Pohl under way, the new discoveries will certainly become a valuable source for historians in the near future. But Himmler biographers have managed without them until now, and it’s unrealistic to expect that bald records of meetings and inspections will provide any final or conclusive proofs to silence Holocaust deniers who have ignored the weight of evidence already known from other archives.

One thought on “Himmler’s Newly Discovered Diaries in Historical Context”