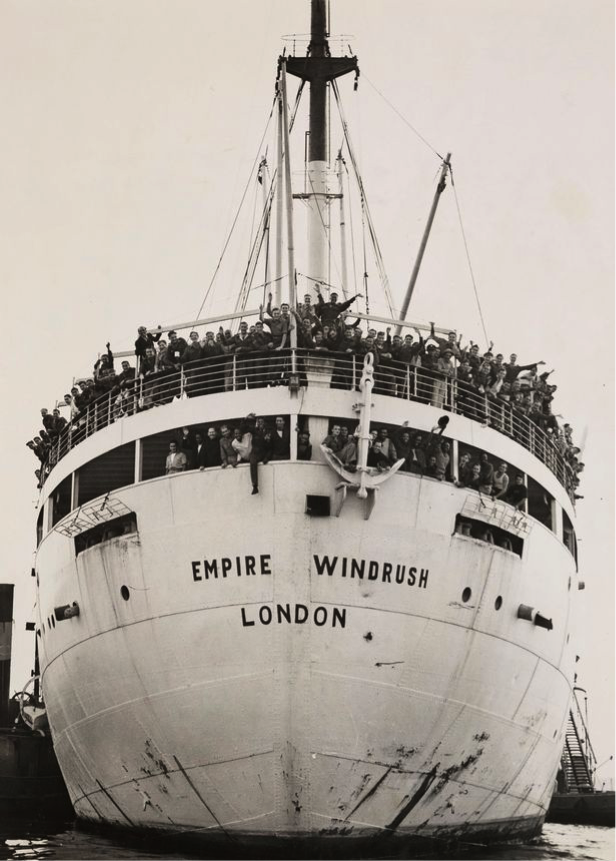 The promises that politicians have made and continue to make about immigration have been a source of great controversy in modern British policymaking ever since the end of the Second World War. The most recent example of this is the Windrush scandal, the deportation of people of West Indian origins. About 550,000 people came into Britain from the West Indies between 1948 and 1973 to work in Britain’s labour-starved economy. However, according to census data quoted by the Guardian, more than 21,000 of those people currently have neither a British passport nor a passport from the country where they were born, placing them in the crosshairs of the Home Office’s ‘Hostile Environment’ immigration policy. Windrush’s scale and effects might be most visible today, but the causes behind this controversy originated in the 1950s and early 1960s when the boundaries between Britain and its former colonies first began to change.

Issues of immigration and race were noticeably introduced into British post-war politics after the Conservative Party passed the Commonwealth Immigrants Act in 1962. The MP for Louth, Sir Cyril Osborne, who was infamous for his extreme views on immigration, managed to convince the Conservative leadership of the need for control in the early 1960s. Despite intense opposition from Labour, Conservative moderates chose to support the new legislation. Instead of regulating the arrival of Commonwealth citizens, the Act did not tighten control on migrants from the colonies who came to re-join their families, leading to ‘Britain’s Racist election,’ as a recent BBC documentary termed it, in 1964.

Looking in greater detail at 1964 general election addresses casts new light both on Labour’s early resistance against populist demands and the emergence of the Tory far right. Likewise, the often underlooked constituency of Southall demonstrates the wide gap between Conservative and Labour attitudes towards immigration and the various ways in which candidates made use of their election addresses. Most importantly, many of the harmful ideas and misconceptions about immigration that emerged in 1964 are resurfacing today, which makes the 1964 election crucial for understanding current immigration debates.

It was a considerable source of pride for both the Conservatives and Labour in the 1950s that a British subject from any part of the Commonwealth could come to the mother country, and enjoy the same right and obligations as any other British citizens. But a decade later, an attempt to curtail immigration made its first formal appearance in British politics with the introduction of the Commonwealth Immigrants Act in 1962.

The passing of the act, however, caused some unpredicted changes to the patters of immigration into Britain. While it generally limited immigration from the Commonwealth, it also led to a dramatic increase in the numbers of dependants entering from 1960 onwards, whose entry was not covered by the Act. The paradoxical conclusion is that the proponents of control created the very situation that they most feared: in eighteen months the net inflow was almost as great as that of the previous six years. This was because the wives and children of those immigrants already in Britain were anxious to join them before further controls could be introduced.[1]

The act also came with only one exemption: (predominantly white) Irish citizens. To some critics this was evidence of its discriminatory nature. Labour leader Hugh Gaitskell, for example, called it: ‘cruel and brutal anti-colour legislation’, which threatened Britain’s leadership over the Commonwealth and its position in the world. 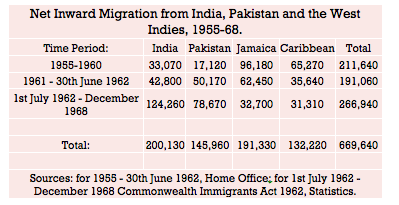 Immigration was debated as early as in the first draft of the 1964 Conservative manifesto. Initially, it was discussed under the Law and Democracy section, which promised to outlaw racial discrimination and provide preferential treatment to Commonwealth citizens. In subsequent drafts, immigration was moved to the section dedicated to Employment, where it emphasised how overcrowded the UK was. In the end, the only guarantee against racial discrimination was that the implementation of the Commonwealth Immigrants Act would be ‘fair and effective’.To avoid the politically sensitive subject, Conservative and Labour leaders attempted to downplay the issue of immigration in the 1964 general election.[2] But a comprehensive examination of that year’s general election addresses shows that their efforts failed.

Labour sought to present itself as the true party of Commonwealth and to challenge the Conservatives’ credentials on this score. In a last-minute decision, the Labour National Executive Committee inserted into their manifesto a promise to retain immigration control until agreement on the subject could be negotiated with the Commonwealth. It also emphasised special help for areas with large immigrant populations and immediate legislation against racial discrimination.

It fast became clear that there were marked differences in the way in which each party was thinking about immigration – Conservatives focused on control, whereas Labour highlighted the need to prevent racial discrimination. The brief period of consensus ended in 1964.

By consulting the 1964 election addresses of individual candidates, we can better explore the differences between the two parties. 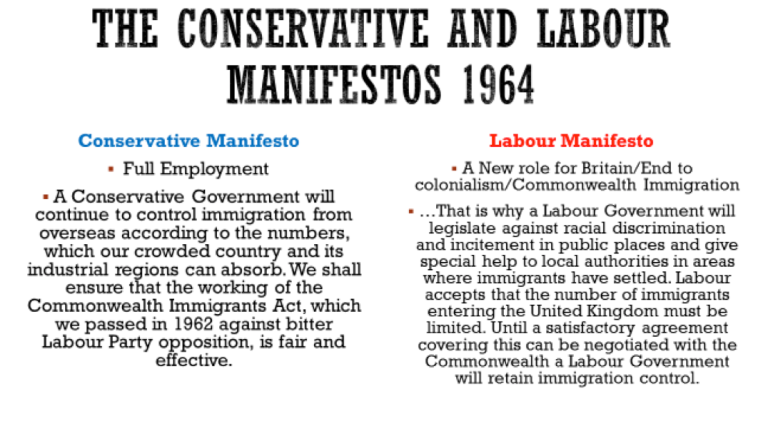 Back then, before the growth of television and the modern media diminished its significance, the election address was the principal communication from the candidate to the electors. It aimed not only to persuade, but also identify the candidate with his party. A 1964 pamphlet from the Conservative Research Department highlighted the importance of the address: ‘An early circulation of a statement of the candidate’s views to the electors is very desirable. It is of great assistance to canvassers and other workers, as many electors prefer not to give a definite promise of support until they have seen the candidate’s address’.

Despite the importance of these addresses, so far the only systematic study, by Nuffield Studies, only used a 25% random sample, which did not accurately portray immigration’s saliency in troubled areas such as the West Midlands. As a result, the study found that only 8% of Conservative candidates and 14% of Labour candidates talked about immigration.[3] 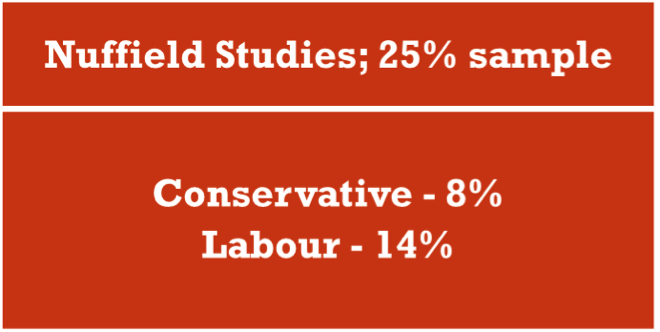 So I decided to conduct a 100% sample. In doing so, I discovered that 14% of the Conservative candidates and 15% of the Labour candidates talked about immigration, suggesting there was greater national significance of the issue than previously recognized.

Similar issues arise regarding the election addresses. Nuffield Studies have concluded that the majority of the addresses that mentioned immigration copied the parties’ manifestos. Yet I’ve discovered that roughly 40% of the Conservative and 20% of the Labour addresses actually exhibited original thinking on the issue. And it’s in these same addresses where we find new and original evidence about not only the emergence of the Tory far right, but also Labour’s opposition to populist pressures in 1964.

Just a quick look at the sheer number of categories found within the addresses concerning immigration highlights the loose boundaries between it and other issues, which some Tories on the far right now sought to exploit. References to housing, employment, racial conflict and the overwhelming number of immigrants that would eventually swarm Britain were some of the most common themes. Andrew Bowden (North Kensington), for instance, warned that unlimited immigration would result in excessive competition for jobs and houses that could only lead to racial strife. Likewise, Ronald Bell (South Buckinghamshire) urged his voters not to ‘bequeath a colour problem to their children’. Others such as Brian Keefe (Liverpool Scotland) dramatically accused Labour of ‘voting against the Immigrants Act and wanting to re-open the floodgates of immigration’. In other words, as early as 1964, an emergent Conservative far right was already beginning to go against the objections of the party’s moderates, laying the foundations for immigration’s rapidly growing political significance in the future.

Labour, by contrast, held its ground and continued to reassert its promise to legislate against racial discrimination. Whereas more than a dozen Tories blamed immigrants for a lack of jobs, employment had been discussed with negative reference to immigration in only three Labour addresses. Most were like that of Labour candidate Bill Dow (South Paddington), who said in his discussion dedicated to housing: ‘It is an attempt by the Tories to blame coloured immigrants for the housing shortage, instead of placing the responsibility for this where it belongs – on the Government.’ The majority of his fellow colleagues argued against Conservative manipulations regarding employment, education and health in a similar fashion. John Dore (Heston and Isleworth), in particular, gave a very insightful summary of the situation: ‘Labour will not be panicked into introducing repressive measures against any group of people’. It is safe to say that although Labour was wary of immigration’s electoral significance in 1964, it managed to reconcile its commitment to racial equality and fair treatment for immigrants with the competitiveness of modern politics. 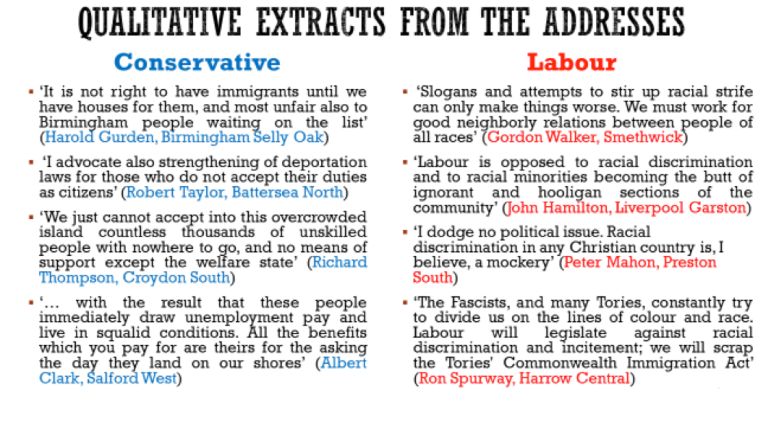 THE SOUTHALL CONSTITUENCY: A CASE STUDY

Nowhere was the gap between Conservative and Labour attitudes towards immigration more profound than in the constituency of Southall. The Conservative candidate in Southall, Miss Barbara Maddin, put immigration on the top of the list of issues in her address. She referred to a debate in parliament on 16 November 1961 when the Labour MP for Southall, Mr Pargiter, described complaints made by local residents regarding immigration as ‘entirely unsocial’. Maddin accused Pargiter of advocating an Open Door policy towards immigrants despite the hardship it placed upon his constituents. In her address, Ms Maddin drew on wider evidence from newspaper articles and parliamentary debates in order to compile a portfolio which portrayed her opponent in a highly unfavourable light.

Her Labour counterpart, Pargiter, went off script from his party’s pro-immigrant manifesto. He briefly mentioned immigration in his address in an attempt to refute wider Conservative claims about immigration’s negative effect on housing and employment. He also promised to prevent racial discrimination from occurring in schools, thus further endorsing Labour’s inclusive stance on the issue. More importantly, Mr Pargiter did not respond to the lengthy and detailed accusations made by his Conservative opponent. This is evidence of some Labour candidates’ hesitancy in making the most out of their election addresses. Overall, the Labour contenders who did not just repeat the Labour Manifesto were not as cunning as their Conservative counterparts, who almost never missed the opportunity to link their constituencies’ immigration troubles back to Labour’s socialist mismanagement.

A software-assisted analysis of election addresses reveals that immigration played an even more prominent role in the Conservative and Labour parties’ contest for office in the 1964 general election than previously recognized, and therefore requires further investigation.

[2] A detailed discussion of this argument can be found in Anthony Messina, Race and Party Competition in Britain (Clarendon, 1989).

One thought on “What does the 1964 General Election tell us about immigration debates today?”