This post is the first in a roundtable co-edited by Marc-William Palen and Rachel Herrmann on science fiction and imperial history. You can read our call for posts here. Posts will run twice a week between now and the second week in July. We look forward to hearing your thoughts on these posts!

Five hundred years in the future, humanity has left earth and expanded into a new solar system. New planets have been terraformed and colonised. Life at the centre of this system is luxurious, sophisticated, civilised. On the outer fringes, existence is more precarious, eking out a living a more dangerous game. This is the world of Joss Whedon’s regrettably short-lived television series Firefly (2002) and its feature film follow-up Serenity (2005). Both follow the rag-tag crew of the spaceship Serenity, led by captain Mal Reynolds (Nathan Fillion), as they struggle to make ends meet by means legal and otherwise on the rough outer edges of this fictional universe, known in the show’s jargon as “the Verse.”

The Verse is cast in the mode of not one but two genres—the space opera and the western—that dramatise life on the frontier, and much of its humour and interest lies in the productive tension between their respective visions of that setting. According to Whedon, Firefly’s genesis lay in his reading of The Killer Angels (1974), Michael Shaara’s historical novel about the Battle of Gettysburg. He afterwards became “obsessed with the idea of life on the frontier, and that of course [made him] think of the Millennium Falcon.”[1] In imagining the space opera as an adapted western that shifted nineteenth-century imperial tropes into an extraterrestrial future, Whedon was merely making explicit long-standing undercurrents within the genre. (Gene Roddenberry’s working title for Star Trek—a constant intertextual counterpoint in Firefly—had been Wagon Train to the Stars.[2] Its trademark incantation of “space, the final frontier” was not incidental.)

The term “frontier” has been a fraught one in recent historical scholarship, because if not treated cautiously it can reproduce the sort of Eurocentric value judgements embodied in Frederick Jackson Turner’s classic 1893 account of the American frontier as “the meeting point between savagery and civilization.”[3] Yet it is from within this coloniser-centred vision of American history that the western must be understood; critical discussions of the genre almost invariably reference Turner’s lecture.[4] In his classic study Horizons West, Jim Kitses provided a structuralist account of the western as a dramatisation of a “philosophical dialect” between the Turnerian categories of “wilderness” and “civilisation.”[5] The interplay of these opposites in the western’s various archetypal stories is complex, but at its most basic the “dialect” is a conflict between “Cowboys and Indians.” As a semi-western, Firefly complicates this picture. Its protagonists are “cowboys in space,” but there are no alien stand-ins for Indians. Humanity is alone in the cold depths of the cosmos. In one episode, the non-existence of alien life is made the subject of an anti-climactic joke: a future version of the dustbowl-era freak show claims to hold the remains of a deceased alien, proof that “we are not alone”; but it turns out to be a mutated cow foetus.

What does this vision of large-scale colonization of lands genuinely empty of indigenous peoples represent? The current historiographical paradigm of “settler-colonialism” emphasises processes by which “settler” societies are shaped by what the late Patrick Wolfe called the “logic of elimination” of native peoples. This “process of replacement” always retains a theme of a “repressed” element, a “refractory imprint.”[6] It was in Australia rather than North America that the fantasy of the blank slate was most fully articulated, in the historical discourse and legal doctrine of terra nullius, but in other contexts native peoples were likewise simultaneously recognised and willed away.[7] Turner’s lecture is a case in point, combining extensive discussion of Indians with repeated references to frontier land as “free” for colonisation.[8] The desire for terra nullius runs deep within expansionist mentalities. Firefly dramatises this impossible fantasy.

As a fantasy of peaceable expansion into empty lands, Firefly functions even more as a space opera. Both the space opera and the western imagine the protagonist as coloniser, but they take radically different views of the processes of colonisation. In the western, civilisation is precarious and maintained only by ever-present exclusionary violence. In Kitses’ terms, the frontier is an unstable borderland between the nobility and savagery of the wilderness, and the decadence and righteousness of civilisation. Conflict between the two is intrinsic, and narrative requirements demand its full cathartic eruption, followed by the re-establishing of a precarious equilibrium. In the space opera, civilisation is rather more self-assured. While violence is not absent—as Star Trek redshirts usually learn the hard way—it generally serves as a narrative device or to build dramatic tension, rather than being intrinsic to the genre’s logic. As a romance of empire on the largest possible canvas, the space opera is in fact invested in downplaying frontier conflict. And so in Firefly the terra nullius fantasy means there are no natives to fight.

As a semi-western, however, Firefly takes violence seriously, and needs its savages of the wilderness. For this there are the Reavers, men who, in the depths of space, have succumbed to an extreme psychosis that places them entirely outside the reach of human reason. Mad with an unrestrained bloodlust, they roam remote settlements in marauding bands, killing and raping all in their path. Unreasoning, rage-filled and devoid of language, they provoke an absolute terror. Whedon has been quite upfront about modelling the Reavers on the Apaches of classic westerns, while claiming to have de-racialised them by making them colonists who have lost their humanity rather than a separate race or species, a project some critics have seen as inherently unworkable.[9] 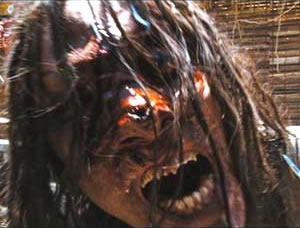 The Reavers are complex signifiers that function on a number of levels. At the most immediate, visceral level, their bodily comportment evokes zombies of the horror genre —not George A. Romero’s ponderous lurchers, but the fast-moving, panic-inducing terrors of 28 Days Later, coincidently released in the middle of Firefly’s initial broadcast in late 2002. Second, their visual identifiers—blood-painted faces, long hair, various gory battle trophies—clearly evoke the Indians of 1950s B-films.[10] The Reavers also practise cannibalism, the ultimate fear underlying colonist relations with the indigenous in frontier settings. Transgressing a fundamental taboo, cannibalism functions in colonial discourse as a key marker distinguishing the “civilised” from the “uncivilised.”[11] In addition, as colonists who have lost their capacity for civilisation, the Reavers absorb and reflect another colonial fear, that of “going native.”

In Firefly, the Reavers are merely one feature of the Verse, a hazard alongside bounty hunters, duplicitous con artists and sadistic warlords. The ultimate enemy, however, is the Alliance, the Verse’s imperial central government. In Serenity—warning: spoilers—the Reavers are made central to the narrative, which explains their origins as a side-effect of a chemical aggression-reduction experiment conducted by the Alliance upon the population of the planet Miranda. Several further layers of meaning are thereby added. They become a Frankensteinian warning against human hubris, but also—oddly, given Whedon’s generally progressive politics—a libertarian allegory about the meddling of big government. In Mal’s centrepiece speech in Serenity, he declares that despite the Miranda disaster, sooner or later the forces of civilisation “will try again … they’ll swing back to the belief that they can make people better. And I do not hold to that.”

The Reavers are thus a focal point that draws together numerous colonial anxieties about indigenous Otherness and indeed about the imperial project itself.[12] In literally and causally linking Reaver savagery to the decadence and immorality of Alliance high civilisation, the film clarifies the liminal position of Serenity’s crew within the moral structure of the Verse. The crew’s position between these two threats, which in the film’s climax must be fought simultaneously, mirrors that of the frontier community in the classic western and the Turnerian historical narrative. On the frontier, Turner claimed, “Complex society is precipitated by the wilderness into a kind of primitive organization based on the family”; Firefly is among other things a show about surrogate family.[13] The space between the extremes of wilderness and civilisation, with its dangers and hardships but also its freedom from the old world’s customs and stifling constraints, is a site for the emergence of a vitality, practicality and individualism that is impatient of constituted authority, and which is tempered only by community at the most local level.

Although the licence for invention afforded by the science fiction setting allows Whedon to sublimate the inherent racial logic of the western, in casting the Reavers as settlers “gone native” and, more broadly, in framing the Verse within a civilisation-wilderness dialect, that logic is never far beneath the surface. At the same time, if Whedon is frustratingly obtuse about identifying the actual victims of frontier violence, he is clear-eyed about the fact of violence itself. The injection of the western’s unapologetic vision of violence into the space opera genre breaks through the latter’s silence about the brutality of empire; it likewise clarifies the specifically nineteenth-century referents of fictional constructions of frontier violence, however futuristic their settings. The original of the interstellar romance is imperial power, historically existing and thoroughly terrestrial.

[5] Jim Kitses, Horizons West (Bloomington, IN, and London: Indiana University Press, 1970), 10–12. Cf. the similar matrix of oppositions in Klein, Frontiers of Historical Imagination, 17. For these categories in Turner, see ‘Significance of the Frontier’, 4, 13–15.

[9] Sam Arroyo, “Joss Whedon Panel @ Wondercon: Full Report,” Comic Book Resources, 20 February 2005. For a critique of the Reavers as B-film Indians, see Agnes B. Curry, “We Don’t Say ‘Indian’: On the Paradoxical Construction of the Reavers,” Online International Journal of Buffy Studies 7, no. 1 (2008).

[10] See ibid. for a detailed discussion of this iconography.

[12] James H. Merrell suggests “reaver,” meaning “A robber, a plunderer; a marauder, a raider” (Oxford English Dictionary), as one of several possible alternatives to the conventional “settler” in settler-colonial contexts: James H. Merrell, “Second Thoughts on Colonial Historians and American Indians,” William and Mary Quarterly 69, no. 3 (2012): 476.

10 thoughts on “Colonising the Verse: Genre, Imperialism and Frontier Violence in Firefly and Serenity”