From an independent Kurdistan to when fascism almost came to Australia, here are this week’s top picks in imperial and global history. END_OF_DOCUMENT_TOKEN_TO_BE_REPLACED 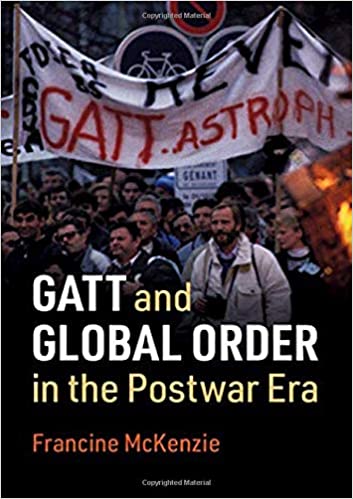 Critics of the leadership and competence of the World Health Organization (WHO) during the Covid-19 pandemic have called for the fundamental reform of the organization. Before the pandemic, the dispute resolution body of the World Trade Organization (WTO) was under fire because its rulings were seen as unsound and over-reaching. These are serious criticisms, but they are not new.

All the major organizations in the UN-system have faced criticism and disgruntled members have periodically withheld funding, blocked proceedings, and threatened to quit.  Occasionally they have even followed through. The latest round of criticism raises doubts about whether these organizations can survive in their present form. Before we can assess the shortcomings of these international organizations or evaluate the effectiveness of proposals to reform them, we need to better understand their failures. The history of one organization, the General Agreement on Tariffs and Trade (GATT), the WTO’s predecessor, can help us understand why the international organizations that are integral to the current global order invariably irritate members and disappoint expectations.

A lot has been written about GATT by political scientists, legal scholars, economists, historians, as well as officials and activists. But the organization itself is not well understood.  Part of the confusion stems from the volume that has been written about GATT, much of it inconsistent or even contradictory. GATT has been described as a regime, a contract, an inter-governmental treaty, a body of law, a club, a forum, and a consumers’ union. It has been characterized as apolitical, technical, obscure, informal, and ineffective. These definitions and descriptors are not necessarily mutually exclusive, but they obscure the organization’s nature and operations. Contradictory assessments of its work and impact compound the problem. Some have criticized GATT as an instrument of American imperialism, an enemy of the environment, a levelling force that erases local cultures and national distinctiveness, and the cause of unemployment and individual suffering. But others claim it is ‘widely considered to have been one of the most successful – if not the most successful – of the postwar international economic organizations’[1] and ‘perhaps the most important and authoritative of all the current International Organizations and regimes’.[2]

Studies of GATT typically examine one of the eight rounds of trade negotiations conducted between 1947 and 1994. There’s a good reason behind this common approach.  Negotiations that lowered tariffs, and later on other kinds of barriers to trade, advanced the organization’s mandate to liberalize and increase international trade. In GATT and Global Order in the Postwar Era, I shift the focus to quotidian and behind-the-scenes institutional activities that expand our understanding of how the organization functioned and the relationship between member states and the secretariat. I also focus on the Cold War, the rise of regional trade blocs, development and agriculture to explore the ways in which trade and politics were interconnected and show how GATT itself was ‘entangled in politics’.[3] Digging deeply into the institutional history revises our understanding of the nature and workings of our current global order. END_OF_DOCUMENT_TOKEN_TO_BE_REPLACED

In the twenty years since the publication of Florence Bernault’s edited volume A History of Prison and Confinement in Africa, the study of Africa’s penal systems has expanded tremendously. This scholarship has not only provided a clearer picture of penal ideas and institutions on the African continent across multiple time periods and locations, it has also offered insights into wider questions about the relationship between punishment, colonialism, and decolonization as well as the global circulation of penal techniques. This special issue aims to analyze African developments on their own terms and in relation to imperial and global narratives of punishment and penological networks as well as to integrate the fields of history, sociology, and criminology more closely, highlighting how theoretical insights of sociology and criminology can inform historical research.  By presenting multiple works together in a special issue, we seek to emphasize the value of Africanist historical approaches and methods for interdisciplinary or multi-disciplinary research, and to highlight the contribution that studies of African penal systems can make to advancing understanding of global trends in punishment, showing how research on punishment in Africa not only engages with theories from the Global North, but also generates theories that reshape wider approaches to the study of punishment.

Topics for consideration could include (but are not restricted to): indigenous forms of punishment; colonial and postcolonial prisons; capital and corporal punishment; political imprisonment; forced labour; and detention camps.

We are interested in articles undertaking detailed case-study analysis of key historical trends, showcasing different methodological and disciplinary approaches. We invite submissions on all regions of Africa, and its relations with broader global or international developments in punishment and penology.

We particularly welcome submissions from scholars based in Africa and early career scholars. END_OF_DOCUMENT_TOKEN_TO_BE_REPLACED

From the long history of Black feminism in Europe to what’s in a “special relationship,” here are this week’s top picks in imperial and global history. END_OF_DOCUMENT_TOKEN_TO_BE_REPLACED

From fighting for the memory of Hiroshima and Nagasaki to how we remember in the twenty-first century, here are this week’s top picks in imperial and global history.

END_OF_DOCUMENT_TOKEN_TO_BE_REPLACED

From remembering Claudia Jones to Brexit, Australian style, here are this week’s top picks in imperial and global history. END_OF_DOCUMENT_TOKEN_TO_BE_REPLACED