In case you missed it (I was tweeting about it A LOT last week), Cornell Library’s Digital Collections have just made available an amazing archive – the PJ Mode Collection – consisting of around 800 political maps that should be on the radar of anyone working on imperial and global history. They. Are. Awesome.

‘The Whole Story in a Nutshell!’ (1888) – Here’s one of my favorites for a lot of reasons. To give it some context, the so-called Great Debate of 1888 (that year’s presidential election) was centered around the future of US trade policy. The GOP was staunchly protectionist and Anglophobic at this time, and they feared the perceived influence of ‘Free Trade England’ on US politics. British free traders (in particular London’s Cobden Club, featured on the bottom left), were the main targets of paranoid Republican protectionist propaganda. Democratic President Grover Cleveland only added to the conspiracy theories when he filled his cabinet and advisors with US members of the Cobden Club. The pro-Harrison map does a vivid job of illustrating the GOP’s economic nationalism in contrast to Democratic free trade. For more on this, my book, The ‘Conspiracy’ of Free Trade, explores the conspiratorial reception of British free-trade ideas in Gilded Age America. 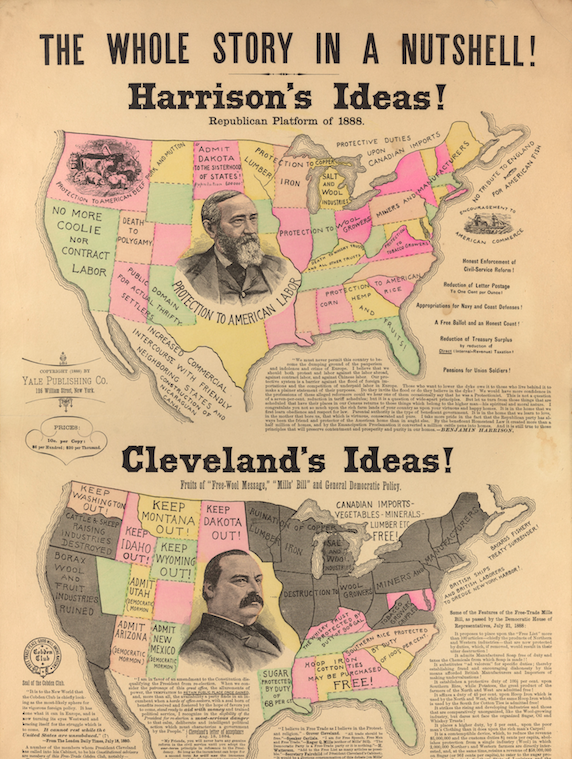 END_OF_DOCUMENT_TOKEN_TO_BE_REPLACED

From America’s lost “Europe First” strategy to the Philippines’s Jewish refugees, here are this week’s top picks in imperial and global history. END_OF_DOCUMENT_TOKEN_TO_BE_REPLACED

Kenya’s Mau Mau Uprising (1952-1964) was plagued with violence. The rebellion was the result of discontent with British colonial rule. When the British had arrived in Kenya, they stole land from the native population; among them, the Kikuyu people suffered most from this. As living conditions grew harder for the Kikuyu under British occupation, they began an aggressive campaign to fight back against British colonial forces.  To quell the rising violence and anti-colonial sentiment, the British created a system of detention camps to incarcerate thousands of the Kikuyu population. In these camps, prisoners were tortured, abused, and, in some cases, murdered.

The events that transpired in these camps have long been hidden away from popular historical narrative though finally, the repercussions of this are reaching the British government. END_OF_DOCUMENT_TOKEN_TO_BE_REPLACED

Reflecting upon the centenary of Armistice Day last Sunday, an article in the Business Standard (India) explores the relationship between economic conflict and the “War to end all wars,” featuring Prof. Biswajit Dhar (Jawaharlal Nehru University) and myself. Such reflections become even more timely in light of the growing speculation just this past month from former US Treasury Secretary Henry Paulson, Bloomberg’s Shawn Donnan and Kevin Hamlin, and the Wall Street Journal’s James Mackintosh that the US trade war with China could turn into a new cold war, what Paulson calls an “Economic Iron Curtain.” From the Business Standard:

A hundred years ago from today, the ‘War to end all wars’ came to a close, leaving in its wake 19 million dead and 23 million wounded. There were many culprits, including economic nationalism, but only one victim — humanity, which was exposed to the horror of industrial warfare in those grim, meat-grinding trenches, only to face the same calamity again, magnified manifold, between 1939 and 1945 (Over 60 million people were killed in World War II). Are we seeing the economic drivers of that first great war re-emerge in today’s world of growing protectionism and trade wars?

In a 2016 report, Deutsche Asset Management Chief Global Economist Josh Feinman writes that “we’ve seen this movie before”, while referring to the rise of economic nationalism, reflected in Donald Trump’s election to the White House, the political and popular backlash against globalisation, exemplified today by the US-China trade war, and the hardening of borders against immigrants, which is a driving force behind Brexit. “The first great globalisation wave, in the half-century or so before WWI, sparked a populist backlash too, and ultimately came crashing down in the cataclysms of 1914 to 1945,” writes Feinman. He goes on to describe “protectionism and economic nationalism” as “culprits” that played a part in causing the two World Wars.

Of course, they were not the only, or perhaps even the most important, causes of the First World War. “While there is a pretty clear causation between protectionism and the era’s trade wars, it is more difficult to prove that trade wars led to the First World War. There is certainly a correlation, but causation is much more difficult to measure,” says Marc-William Palen, senior lecturer of imperial history at the University of Exeter.

END_OF_DOCUMENT_TOKEN_TO_BE_REPLACED

With a special Armistice centenary edition, here are this week’s top picks in imperial and global history.

END_OF_DOCUMENT_TOKEN_TO_BE_REPLACED

From Monsters vs. Empire to how fish and chips migrated to Great Britain, here are this week’s top picks in imperial and global history. END_OF_DOCUMENT_TOKEN_TO_BE_REPLACED

The above full-time post is available from 2nd January 2019 on a permanent basis.

The University of Exeter is a Russell Group university in the top 200 of universities worldwide.We combine world-class teaching with world-class research, and have achieved a Gold rating in the Teaching Excellence Framework Award 2017. We have over 22,000 students and 4600 staff from 180 different countries and have been rated the WhatUni 2017 International Student Choice. Our research focuses on some of the most fundamental issues facing humankind today, with 98% of our research rated as being of international quality in the 2014 Research Excellence Framework. We encourage proactive engagement with industry, business and community partners to enhance the impact of research and education and improve the employability of our students.   END_OF_DOCUMENT_TOKEN_TO_BE_REPLACED

On April 9, 1994, the cover of the Spectator boasted a colourful cartoon that depicted Winston Churchill sticking up two fingers to a boatload of Caribbean migrants – “the Windrush generation”, as we would now call them. Inside was an article by Andrew Roberts (who had previously made a name for himself as a biographer of Lord Halifax) which labelled Churchill as an ideological racist. “For all his public pronouncements on ‘The Brotherhood of Man’ he was an unrepentant white – not to say Anglo-Saxon – supremacist”, Roberts wrote. Moreover, “for Churchill, negroes were ‘niggers’ or ‘blackamoors’, Arabs were ‘worthless’, Chinese were ‘chinks’ or ‘pigtails’, and other black races were ‘baboons’ or ‘Hottentots’.”

Roberts’s claims, which were soon to be published at greater length in his book Eminent Churchillians, provoked a storm of criticism. The historian Niall Ferguson wrote that ‘my friend Andrew Roberts has joined the growing ranks of Churchill-bashers’. Bill Deedes, who had served as a junior minister in Churchill’s final government, lamented in the Daily Telegraph that ‘We live in times when greatness draws critics and genius attracts iconoclasts – and iconoclasm sells books.’ Lady Williams, a former personal secretary to Churchill, told biographer William Manchester that Roberts’s ‘scurrilous allegations’ were symptomatic of a form of history that involved ‘shooting down great historic figures’. END_OF_DOCUMENT_TOKEN_TO_BE_REPLACED

From Fanon’s fugitive archive to Gandhi for the post-truth age, here are this week’s top picks in imperial and global history. END_OF_DOCUMENT_TOKEN_TO_BE_REPLACED