On a Sunday afternoon in June 1938, the International African Service Bureau (IASB)  held one of its numerous rallies at Trafalgar Square in central London. As one of the prime anti-colonial organisations of that time based in London and comprised of activists from West- and East Africa as well as from the West Indies,the gathering was closely monitored by the Metropolitan Police. The sergeant on duty reported that the demonstration was “attended by an audience fluctuating between 100 and 250 persons, of whom approximately 15% were Jews”. Speakers at the protest included, among others, Jomo Kenyatta (later first president of Kenya), the Trinidadian intellectual C.L.R. James, the Jamaican dockworker Chris Jones, and the Pan-Africanist activist and journalist George Padmore. Furthermore, the informant took notice of placards containing slogans such as “Fascism in the British Empire”, “Abolish fascist methods in the Colonies”, and “Imperialism is incompatible with peace”. The speakers repeatedly denounced the evil practices of British Imperialism and Colonialism in its territories and warned against any form of acquiescence with the Empire regarding the surging threat of fascism posed by Italy and Nazi-Germany. What’s more, they explicitly drew parallels between the practice of British and French colonialism and the policies and actions of their fascist rivals. In short, for the IASB combatting fascism could not be done without simultaneously overcoming imperialism from within.[1]

This event was by no means a forum for black activists alone. There were also numerous white British speakers from the left who contributed to the demonstration. Francis Ridley is a case in point. Ridley was a leading figure in the Independent Labour Party (ILP), which was arguably the most consistent of British leftist parties when it came to the question of

how to act in solidarity with anti-colonial and anti-imperial activists in the metropolis. Next to Fenner Brockway, the long time ILP chairman, editor of the party weekly and later Labour MP and the Quaker and Socialist activist and author Reginald Reynolds, Ridley can retrospectively be regarded as a defining figure of British anti-imperialist activism from the 1930s to the 1950s. Tellingly, he was described by the police informant at the scene as a “white man”, in order to highlight the supposedly extraordinary nature of his participation in the rally. In his speech, Ridley demanded that the “democratic conditions under which the people of England lived should be extended to the black workers of the Empire. Much talk was made today of the hardships suffered by the minorities in fascist countries, but these minorities were being treated very well in comparison to the negroes in the British Empire.” Ridley thus attempted to bring the suffering of colonized peoples in the “periphery” into the “metropolis” by connecting it to the condition of subaltern peoples of Europe. The example presented here thus hints at emerging and previously underrated cross-sectional solidarities among the numerous ethnic and social groups of London. END_OF_DOCUMENT_TOKEN_TO_BE_REPLACED

From what optimists get wrong about conflict to how the Soviet Union took on religion in pictures, here are this week’s top picks in imperial and global history. END_OF_DOCUMENT_TOKEN_TO_BE_REPLACED

The fifth edition of the Global Humanitarianism Research Academy (GHRA) took place at the Leibniz Institute of European History Mainz and the Archives of the International Committee of the Red Cross in Geneva from July 7 to 19, 2019. It approached cutting-edge research regarding ideas and practices of humanitarianism in the context of international, imperial and global history thus advancing our understanding of global governance in humanitarian crises of the present. With the Chair in International History and Historical Peace and Conflict Studies at the Department of History of the University of Cologne, a new partner joined the GHRA 2019. As in the last four years the organizers FABIAN KLOSE (University of Cologne), JOHANNES PAULMANN (Leibniz Institute of European History Mainz), and ANDREW THOMPSON (University of Exeter) received again a large number of excellent applications from more than twenty different countries around the world. Eventually the conveners selected eleven fellows (nine PhD candidates, two Postdocs) from Brazil, Cyprus, Egypt, Ireland, Japan, Portugal, the United Kingdom, and the United States. The multitude of disciplinary approaches from International Law, Political Science, and Medicine proved to be very rewarding just as the participation of guest lecturer CLAUS KREß (University of Cologne), visiting fellow JULIA IRWIN (University of South Florida, Tampa) as well as STACEY HYND (University of Exeter) and MARC-WILLIAM PALEN (University of Exeter) as long-standing members of the academic team. END_OF_DOCUMENT_TOKEN_TO_BE_REPLACED 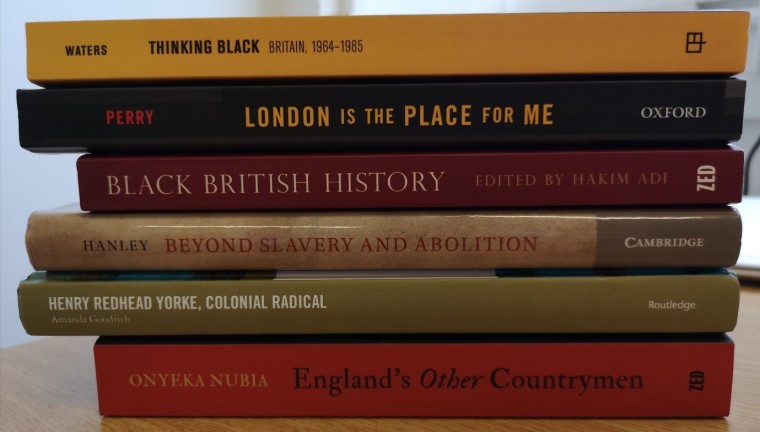 October marks Black History Month in the UK, providing the perfect excuse to delve into some of the best new history writing in this dynamic and rapidly-expanding field. Since my first monograph, Beyond Slavery and Abolition: Black British Writing, c.1770-1830 (Cambridge University Press, 2018), was published last October, the field of black British history seems to have been completely transformed. The past twelve months have seen several (I counted six) new permanent academic posts in the UK and a new MA programme, all dedicated more or less specifically to black British history. And January 2020 sees the launch of a new seminar series in London supported by the Institute for Historical Research, showcasing some of the best new work in the field from within and beyond the university – hope to see some of you there!

Some of this will have to do with the publication in October 2018 of the Royal Historical Society’s Race, Ethnicity and Equality Report, which highlighted the chronic underrepresentation and overwork of ‘Black and Minority Ethnic’ academic staff in British history departments. But the sudden heightened visibility of black British history in UK academia is not purely down to newfound resolutions to build stronger, better history departments, nor solely to the ongoing work to ‘decolonise’ history curricula, though both are important factors. The simple fact is that we have had an incredible year of high-quality scholarly research publications, accounting for some of the most innovative, dynamic, and vital work on British history as a whole.

Don’t call it a ‘turn’ – but there is more and more great work out there that, taken together, is changing the way we think about Britain’s past and its relationship to global and imperial history. Some of you, especially if you don’t work on topics obviously related to black British history, might be curious about how this impacts on your research interests. So, to celebrate and spread the word about this new wave of black British history scholarship, here are my top picks from the past twelve months. END_OF_DOCUMENT_TOKEN_TO_BE_REPLACED

From the lost chapter of the world’s first novel to the lost world of Ottoman cosmopolitanism, here are this week’s top picks in imperial and global history. END_OF_DOCUMENT_TOKEN_TO_BE_REPLACED

Isolationism is much in the news in recent days. President Trump’s acquiescence to Turkish demands regarding a modern buffer area, including a new offensive, followed rapidly by an announcement that all, or nearly all, US troops will be withdrawn from Syria has drawn sharp rebukes, including from prominent Republican members of Congress. Disastrous consequences for Kurdish people, and former US allies, on the ground in Syria has added fuel to this fire. Most notably Senator Lindsey Graham suggested that Trump “must” rethink the US position, and argued that isolationism has not “worked” in particular historical moments, such as before the Second World War. Others have responded that these latest policy changes do not, in fact, amount to isolationist or even retrenchment politics, given the scale and scope of US military commitments worldwide. While yet others have cited history, noting, sadly, that major powers have a tendency to sell out allies when it is convenient or the going gets tough, which itself does not necessarily amount to any particular type of strategy or policy position.

END_OF_DOCUMENT_TOKEN_TO_BE_REPLACED

From an intimate view of the British Empire to when the Nazis were welcome in the Canary Islands, here are this week’s top picks in imperial and global history. END_OF_DOCUMENT_TOKEN_TO_BE_REPLACED

Rethinking History is seeking to attract new book reviewers and would welcome suggestions of works to review from PhD candidates and early career researchers working in global and colonial history. We also have a specific need to find reviewers for the following recently-published works: END_OF_DOCUMENT_TOKEN_TO_BE_REPLACED

From refuting the idea that precolonial Africa lacked written traditions to how war forced the United States to rethink the politics of oil, here are this week’s top picks in imperial and global history. END_OF_DOCUMENT_TOKEN_TO_BE_REPLACED

The Autumn Term is now upon us, and so please find the Centre for Imperial and Global History seminar schedule below for your calendars.