The fifth edition of the Global Humanitarianism Research Academy (GHRA) took place at the Leibniz Institute of European History Mainz and the Archives of the International Committee of the Red Cross in Geneva from July 7 to 19, 2019. It approached cutting-edge research regarding ideas and practices of humanitarianism in the context of international, imperial and global history thus advancing our understanding of global governance in humanitarian crises of the present. With the Chair in International History and Historical Peace and Conflict Studies at the Department of History of the University of Cologne, a new partner joined the GHRA 2019. As in the last four years the organizers FABIAN KLOSE (University of Cologne), JOHANNES PAULMANN (Leibniz Institute of European History Mainz), and ANDREW THOMPSON (University of Exeter) received again a large number of excellent applications from more than twenty different countries around the world. Eventually the conveners selected eleven fellows (nine PhD candidates, two Postdocs) from Brazil, Cyprus, Egypt, Ireland, Japan, Portugal, the United Kingdom, and the United States. The multitude of disciplinary approaches from International Law, Political Science, and Medicine proved to be very rewarding just as the participation of guest lecturer CLAUS KREß (University of Cologne), visiting fellow JULIA IRWIN (University of South Florida, Tampa) as well as STACEY HYND (University of Exeter) and MARC-WILLIAM PALEN (University of Exeter) as long-standing members of the academic team. 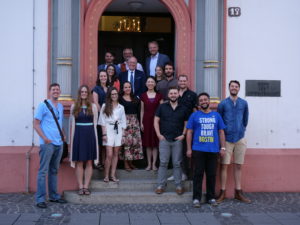 First Week: After the intense discussion of a previously prepared reading list on Day One, the Second Day was reserved entirely for the presentations and discussion of the participants’ projects. The range of studies on historical forms of humanitarianism and human rights encouraged a productive atmosphere of exchange, critique and pondering among the peers. Concretely, the topics presented encompassed the history of humanitarian aid in authoritarian states and the comparison of projects of Oxfam and Médecins sans Frontières from the 1970s to 1990s (MARIA CULLEN); a longue durée view of displacement and hospitality in an African borderland (Uganda/South Sudan) by conceptualizing languages of aid and lands of refuge (MITCHELL EDWARDS); a glance on new colonial challenges in the Portuguese Colonial War (1961-1976) and the role of international intervention and humanitarian assistance in Angola, Guinea-Bissau and Mozambique (ANA FILIPA GUARDIÃO); the history of psychiatry in refugee camps dealing with uprooting, trauma and confinement in various case studies from the 1940s onwards (BAHER IBRAHIM); an interdisciplinary historical legal investigation of international humanitarian law in the Republic of Cyprus from 1963 until 1971 in light of the 1949 Geneva Conventions (NADIA KORNIOTI); an ‘imperial’ history of the Salvation Army’s overseas settlements and colonies between 1890 and 1939 (ADAM MILLAR); the role of international humanitarian relief and local female aid in counter-insurgency warfare in Kenya 1952-1960 (BETHANY REBISZ); a multifaceted history of refugee politics, foreign aid, and the emergence of American humanitarianism in the early twentieth century (KYLE ROMERO); the legal history of slave trade suppression and the reimagining of peace in 19th century international law with a focus on dynamics between Britain and slave-based Latin-American states (ADRIANE SANCTIS DE BRITO); a history of disaster, recovery, and humanitarianism focussing on the Japanese Red Cross Society between 1877 and 1945 (MICHIKO SUZUKI); the scale of a humanitarian turn in the BBC External Services and the benevolence of British internationalism from 1965 to 1995 (STEPHEN WESTLAKE).

On Day Three the fellows were given the opportunity to consult individually the conveners and academic team and to profit from their extensive experience in the history of humanitarianism and human rights. Additionally, a first insight into the work of ICRC archives was given by GUY THOMAS (Deputy Head of Library and Public Archives, ICRC), before international criminal law expert and director of the Institute for International Peace and Security Law CLAUS KREß (University of Cologne) concluded the day with an inspiring keynote lecture on Versailles and the Origins of International Criminal Law. 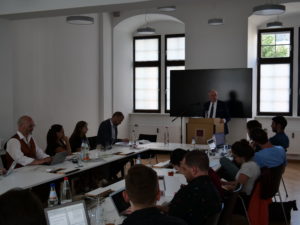 From a historical perspective, he questioned the breakthrough character of Versailles for modern International Criminal Law while stressing the importance of historicizing norms as legacies of previous debates. Day Four and Five were devoted to the work on the respective new entries for the Online Atlas on the History of Humanitarianism and Human Rights (http://hhr-atlas.ieg-mainz.de). Each year, these serve to present the GHRA fellows work to a broader public and at the same time the Online Atlas provides users with information on key concepts, events, and people which shaped the development of modern humanitarianism and human rights linking it with an interactive world map.

For the second week, the GHRA moved from Mainz to Geneva to enjoy another week of on-site research, various discussions and the possibility of exchange with ICRC members. On the First Day GUY THOMAS (Deputy Head of Library and Public Archives, ICRC) welcomed the participants and introduced them to the facilities of the Red Cross in Geneva, whereupon FABRIZIO BENSI (ICRC Archivist) and DANIEL PALMIERI (ICRC Historical Research Officer) presented the history and structure of the ICRC General Public Archives. FANIA KHAN MOHAMMAD (ICRC Archivist) introduced the Tracing Archives of the ICRC, followed by a presentation from SONIA CRENN (ICRC Librarian) on the enormous library holdings on International Humanitarian Law, human rights history and humanitarian action in international conflicts. The fascinating world of the ICRC Audiovisual Archives was made more accessible to the group by MARINA MEIER (ICRC Film Archivist) and DAMIAN GONZALEZ DOMINGUEZ (ICRC Photo Archivist). The holdings of these archives uniquely illustrate the activities of the ICRC and of the International Red Cross and Red Crescent Movement from the late 19th century until today (https://avarchives.icrc.org/). The afternoon was dedicated to gaining first insights individually into the archival and library holdings. Some fellows had already worked in the ICRC archives, but as all projects connect somehow to the holdings the participants appreciated the chance to (re)visit them. Therefore, major slots of the following days in Geneva were scheduled for this work with the documents and individual consultations with the ICRC experts.

Last but not least, in the afternoon of Day Four RAFIULLAH QURESHI (ICRC Prevention Advisor at the Department of Law & Policy) gave a compelling presentation on the endeavours of the ICRC in developing programmes for the promotion and integration of International Humanitarian Law and prevention approaches.

On the Fifth Day, after another possibility to consult the archives, the wrap-up and reflection about the intense two weeks concluded the GHRA 2019. The new entries for the Online Atlas of the History of Humanitarianism and Human Rights will be published in the next months.

Rafiullah Qureshi (Prevention Advisor at the Department of Law & Policy)