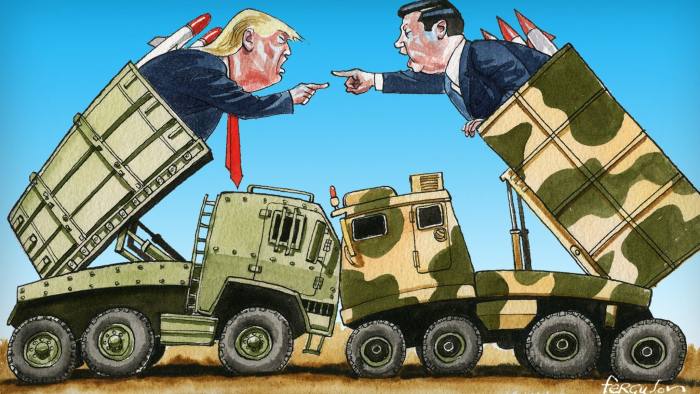 From America’s lost “Europe First” strategy to the Philippines’s Jewish refugees, here are this week’s top picks in imperial and global history.

The Strategic Thinking That Made America Great

In the last few weeks, U.S. President Donald Trump has criticized key allies, called the European Union a foe, and labeled Russia a friendly, respectable competitor. By coddling Russian President Vladimir Putin, Trump seeks to appease Russia’s leader, who is not only working systematically to expand Russia’s influence around the globe but also trying to support a growing number of authoritarian leaders who spurn liberal democratic values and free market practices. Trump’s strategy for advancing U.S. greatness is an “America first” agenda: minimizing obligations to allies, treating everyone as a competitor, freeing the United States from the restrictions imposed by multilateral institutions, seeking trade advantages through bilateral negotiations, building up military power, befriending dictators if they support him, and acting unilaterally in a zero-sum framework of international politics.

Before Trump, the bedrock of U.S. grand strategy for successive administrations, from Franklin D. Roosevelt to George H. W. Bush, was “Europe First.” “Europe First” meant seeking democratic allies in key areas of the globe, especially across the Atlantic; embracing multilateral institutions; and thwarting efforts of adversaries to gain control of the preponderant natural resources, industrial infrastructure, and skilled labor of Europe and Asia. It never meant Europe alone. The strategy was the means through which policymakers sought to safeguard democratic capitalism and serve the most vital interests and values of the United States—abroad, but especially at home. Of all the pillars of U.S. foreign policy that Trump has jeopardized since taking office, his abandonment of the “Europe First” strategy stands to be the greatest loss. [continue reading]

‘Give Africa its art back’, Macron’s report says

A report commissioned by French President Emmanuel Macron will recommend the full restitution by French museums of works in their collections which were taken “without consent” from former African colonies. The French historian Bénédicte Savoy and the Senegalese economist and writer Felwine Sarr will present their 108-page study to President Macron this Friday, 23 November. In it they argue that the complete transfer of property back to Africa and not the long-term loan of objects to African museums should be the general rule for works taken in the colonial period unless it can be proven that these objects were acquired “legitimately”.

President Macron must now decide whether to implement the report’s radical proposals in the face of strong opposition expected from his Culture Ministry and the museums themselves. The report’s authors urge the president to cast aside “political prudence and museum anxiety” and lift the sacrosanct principle of the inalienability of national collections. Bénédicte Savoy strongly denies that the new policy might lead, as museums fear, to the emptying of institutions such as the Musée du Quai Branly in Paris which houses 70,000 African objects. The report also aims to put strong pressure on museums throughout Europe to review their policies. [continue reading]

A deal between Donald Trump and Xi Jinping will not last

Are you a Marxist, a realist or a believer in the accident theory of history? Each school of thought suggests a different way of analysing the crisis in US-Chinese relations. A trade war is well under way between the world’s two largest economies, and talk of a new cold war is now common in both Washington and Beijing. The two countries have just had a frosty and unproductive encounter at the Asia Pacific Economic Co-operation meeting. But, at the end of this month, Donald Trump and Xi Jinping, the presidents of the US and China, will meet at the G20 summit in Argentina for crucial talks that could culminate in a new deal on trade — or a further rise in tensions.

A Marxist might expect that business interests will prevail, and that, as a result, there will soon be a truce in the trade war between the US and China. A follower of the “realist” theory of international relations would assume that an established power like the US and a rising power, such as China, are inevitably going to clash — and that therefore economic and strategic tensions will keep rising. And somebody who thinks that history is driven by accidents will tell you that no theory can explain how things will pan out since so much depends on unpredictable human beings. [continue reading]

The West African Students Union (WASU) and the London Moment

In the northern hemisphere, autumn is heralding itself – and with it the start of the academic year. When the Michaelmas term (autumn trimester) began in 1925 London, a new group set out to recruit student members among the many societies within the University of London: The West African Students Union. Two anti-colonial activists had founded it the previous summer: Amy Ashwood Garvey from Jamaica, wife of the Pan-African politician Marcus Garvey, and the Nigerian law student Lapido Solanke.

According to its official statutes, the union was a welfare organization for African students and emigrants in London. Its aim was to improve and facilitate their living situation in the city, for example by supporting newly arrived West Africans in finding accommodation. However, the organization quickly changed into a platform to vividly discuss alternatives to the imperial world order. Solanke, himself a Pan-African thinker, saw the WASU as a training ground for practical unity and effective cooperation between all West African students. [continue reading]

It is a little-known history that the Philippines was a haven for 1,200 Jews fleeing Nazism. Their admission from 1934 to 1941 was the result of two interrelated projects: first, the acquisition of visas for selected refugees under a special immigration plan; second, the ‘Mindanao Plan’.

Asia was not an unusual destination for Jewish refugees, with many emigrating to Shanghai which required no visas for admission to the International Settlement. The Philippines became an ideal choice in addition to Shanghai; it served as a gateway to enter the United States (US) since it was an American Commonwealth (1935-1946). Acquiring Philippine visas, however, required an affidavit of support or financial guarantee. This was the case, for example, for Juergen Goldhagen and his mother who left Germany in 1937. Thanks to the help of a family friend, they acquired visas for the Philippines where Juergen’s father previously migrated in 1935 after losing his job being Jewish. They arrived on 8 December 1937, and Goldhagen who was a child refugee then, assimilated into Philippine life, learning English and attending school with Filipinos. [continue reading]