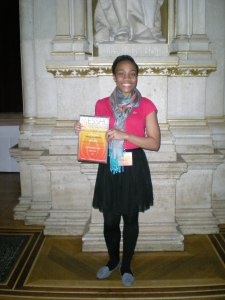 The Centre for Imperial and Global History wishes to congratulate our student, Temi Alanamu, who was recently awarded an Honourable Mention Award under the inaugural Professor Jan Lucassen Award for the best paper by a PhD student at the European Social Science and History Conference in Vienna, 2014 – a very good showing at her first major conference!

It was an honour for my paper “Childhood Socialisation in Nineteenth-Century Yorubaland” to receive an honorable mention for the first Professor Jan Lucassen Award…My paper discussed the cultural processes responsible for transforming biological males and females into social men and women and was taken from the “Childhood” chapter of my doctoral thesis. I am grateful to my first supervisor Dr Stacey Hynd, who was instrumental to the success of the paper and my second supervisor Dr Staffan Mueller-Wille who gave the paper the much needed socio-philosophical perspective.

The paper, a version of which is currently under journal review, nuances existing theories of childhood socialization, based largely on Western evidence, by exploring how both boys and girls were raised in pre-colonial Yoruba culture in Nigeria. Temi uses a combination of missionary journals, proverbs and Yoruba folk tales to provide an innovative assessment of household socialization, the impact of missionaries and Western education, and children’s engagement with both indigenous and foreign ideas. She argues that children understood society through three distinct routes: socialisation in the household, childhood labour, and via acculturation during playtime activities.

Temi shows how children first encountered society in the household where they learned allegiances, household responsibilities, and socially acceptable behaviour. They in turn either enacted these teachings or they rebelled against their tenets. When children were old enough to learn a vocation, they again encountered difficulties when negotiating indigenous expectations of childhood labour and new ideas introduced by mission schools, with girls’ labour in particular being highly valuable to the household. Through labour, children also developed an independence that was valuable to occupational endeavours but brought them into conflict with familial adults.

Finally, within the discussion of leisure and play, Temi illuminates Yorùbá perceptions of children as active social entities in their own right. In particular, she uses Yoruba folk tales like ‘The Story of a Woman Whose Little Girl Made Palm Oil’ to highlight how children were subtly instructed through these tales about the importance of familial relations, the need to be proficient in domestic tasks, the urgency of economic independence, the importance of wisdom, the significance of good character, and the consequences of malevolence.

Temi is currently in the process of finalizing her PhD thesis on ‘“Before the White men came”: the gendered lifecycle in nineteenth-century Yorubaland, Nigeria’. This thesis provides the first detailed historical assessment of both male and female gender roles and identities in Yorubaland, tracing evolving ideas of gender from the cradle to the grave.

One thought on “History PhD Awarded for Work on 19th-Cent. Childhood Socialization in #Nigeria”