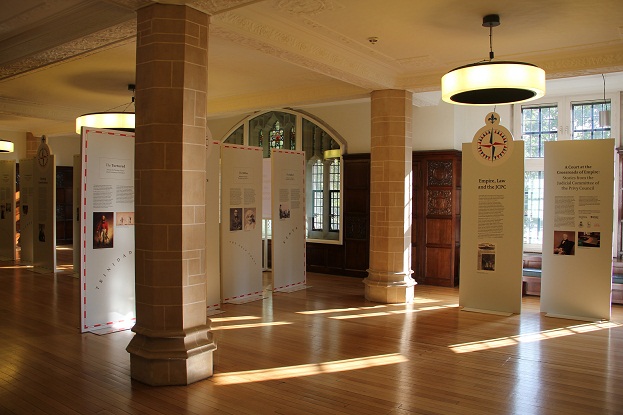 The London exhibit on law and the British Empire, spearheaded by the Centre’s own Dr. Nandini Chatterjee, has had more than 25,000 visitors so far, and is open to the public until September 26th.

[…] The exhibition – A Court at the Crossroads of Empire: Stories from the JCPC – opened for a two-month run at the beginning of August 2014. Curated by a team of academics related to the “Subjects of Law” network, led by Charlotte, Nandini, and Dr Stacey Hynd (also from the University of Exeter), it traced the JCPC’s evolution from its foundation in 1833 to the emergence of the Commonwealth in the 1950s, largely through the stories of individuals whose cases often had a direct impact on commerce and legal practice, as well as the appellant’s own future – for better or, as it occasionally turned out, worse.

“When we applied for AHRC funding, the aim was to create a network of historians, researchers and archivists who share an interest in the law’s relationship with culture. Of course, as a group of academics, we are driven by different research objectives. But what always inspired each one of us – and this is central to the exhibition – were the personal stories,” says Nandini. “Yes, the JCPC itself was important, but it was also huge and distant. By focusing on what actually happened to the people, we could bring them forward and humanise the court’s decisions through this exhibition.”

What tales they are, brimming with slavery, torture, murder and piracy, rebellion and political emancipation, and all part of the fabric of wider British and Commonwealth history. Many of them are landmark cases: such as  the ‘Valiant Five’, five women who successfully challenged a ruling from Canada’s Supreme Court which declared women were not ‘persons’ and could not therefore stand for Senate.

Others highlight the racial dynamics of justice in the British Empire: Benjamin Knowles, a British doctor in Ashanti (Ghana) shot his wife in a drunken quarrel and found himself tried and sentenced to death under procedures normally intended for indigenous Africans, without defence counsel, jury or right of local appeal.  Knowles’ appeal brought home the contrast between metropolitan and colonial standards of ‘justice’. The case of Victoria Skinner, who was deemed to have automatically inherited her late great-grandfather’s official Christian identity despite being raised Muslim in a clearly multi-faith family, demonstrates the difficulty of categorising people in law according to their religious identity; and points to comparable dilemmas in the present day.

Many of these powerful stories help to dispel the assumption that the JCPC’s role was always to impose the long arm of English law across the Empire. In fact, its position was often rooted in mediation, treading the difficult line between protecting the rights of the Empire’s inhabitants and being an agent of imperial power. The exhibition describes this delicate balancing act vividly, reflecting the variety of ways in which countries became part of the British Empire and the degree to which local law was recognised, sometimes excluding the local population from the influence and protections of English common law. Since such local law included discriminatory laws made by undemocratic local assemblies as well as genuinely indigenous laws, such compromises had implications both good and bad.

As Nandini says, the curators did not attempt to impose a single narrative to the complex story of law and justice in the British Empire. However, while highlighting the diversity, the aim has been to foreground the importance of law in the lives of millions of people ruled by the Empire, and the commitment of such people to seeking justice in law. “I find a lot of these cases deeply moving, because they all raise important moral and ethical questions about what happens when diverse people fight for their rights and lives under unequal conditions,” she says. “You want to know what the outcome will be!”

For Ben Wilson, Head of Communications at the Supreme Court, the selection of compelling stories with broader applications has been key to the exhibition’s success. More than 25,000 visitors were welcomed across the two months, and exit surveys revealed that 80% felt they were better informed about the work of the JCPC. The court ran a series of days for schools around the Universities of Exeter and Reading, which included tours and a close study of one of the cases, complete with access to lawyers who helped students prepare for mock legal hearings.

“What the exhibition shows is that far from the assumption that we were exporting ‘The right way of doing things’, there was a real desire to listen to and learn from the communities being served across the Empire and Commonwealth,” he says.

“We worked with the researchers to come to a balanced perspective, highlighting the progressive nature of rulings that protected people’s rights without glossing over some decisions that would seem odd today.”

This approach has been received equally enthusiastically by professional visitors. Dr Karen Brewer, Secretary General at the Commonwealth Magistrates’ and Judges’ Association, says she was struck by the way many of the historical cases resonate in the Commonwealth of the 21st century.

“A Court at the Crossroads was a very informative historical account of the role of the Privy Council,” she says. “And it was interesting how some cases served as reminders of current and recent judgements. Many of these issues are still relevant today.”

The exhibition has left the court with a tangible legacy of new content for guided tours and for re-use in the permanent exhibition space. Ben says that particularly for young people visiting the Supreme Court and considering a future career in law, seeing the breadth of cases and how appeals have been determined down the years is a good way to demonstrate the court’s vital role in maintaining the proper order of a democratic, stable society.

“The JCPC was an institution that was undoubtedly used for the benefit of empire,” says Ben. “But speaking to Charlotte and Nandini, we were continually struck by the power of the concept of seeking justice, and the fact that rural communities in the far-flung corners of the Empire had an innate yearning for it – and understood that the JCPC was somewhere they had a right to appeal to. They remained determined to access it, even if the result didn’t go their way.”