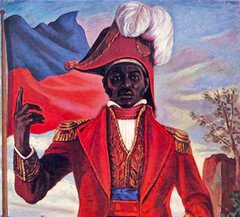 From the meaning of Haitian independence, to the “discovery” of 170,000 more FCO files, here are this week’s top picks in imperial and global history.

The “Black Republic”: The Meaning of Haitian Independence Before the Occupation

On January 1, 1804, Jean Jacques Dessalines and his fellow generals met at Gonaïves to declare formally their independence from France. The Haitian Declaration of Independence and the establishment of the first republic governed by men of African descent in the Western Hemisphere stunned whites and blacks in the United States. White planters and their sympathizers denounced Haiti, inventing the phrase “the horrors of Saint-Domingue” to describe the violent process by which an enslaved people had risen up, overthrown their masters, and fulfilled the worst fears of a slaveholding nation.[1] African Americans, however, articulated a much different interpretation of the Haitian Revolution. For some, the act of self-emancipation in Haiti stirred their own hopes for freedom. For others, the creation of a “Black Republic” was a radical assertion of racial equality, an unprecedented opportunity for blacks in the Western Hemisphere to demonstrate their ability to prosper as citizens and leaders of a modern nation. For many, then, Haiti had a special mission—a mission endorsed by its own political leaders—to the entire world. [continue reading]

History of Lynchings in the South Documents Nearly 4,000 Names

DALLAS — A block from the tourist-swarmed headquarters of the former Texas School Book Depository sits the old county courthouse, now a museum. In 1910, a group of men rushed into the courthouse, threw a rope around the neck of a black man accused of sexually assaulting a 3-year-old white girl, and threw the other end of the rope out a window. A mob outside yanked the man, Allen Brooks, to the ground and strung him up at a ceremonial arch a few blocks down Main Street.

South of the city, past the Trinity River bottoms, a black man named W. R. Taylor was hanged by a mob in 1889. Farther south still is the community of Streetman, where 25-year-old George Gay was hanged from a tree and shot hundreds of times in 1922. And just beyond that is Kirvin, where three black men, two of them almost certainly innocent, were accused of killing a white woman and, under the gaze of hundreds of soda-drinking spectators, were castrated, stabbed, beaten, tied to a plow and set afire in the spring of 1922. [continue reading]

Down Under, Transnational, Global: Exploring Russian and Soviet History with Philippa Hetherington

The Black Sea is in the news for all of the wrong reasons these days. Whether it’s the Russian annexation of Crimea, uncertainty surrounding the outcome of parliamentary elections in Moldova, or the breakdown of Moscow’s plans to conduct a natural gas pipeline to Europe via the Balkans, these former Tsarist borderlands (and shores) have become an object of geopolitical intrigue that few would have predicted only a year or two ago.

Lost among fears of a revived Cold War is another ongoing crisis in the region: namely, sex trafficking, or what earlier generations would have known as “the traffic in women.” Even as countries like Russia are some of the largest destination for immigrants from other parts of the former Soviet Union, Moscow’s former western borderlands–Ukraine and especially Moldova–constitute some of the largest “exporters” of women into the international sex trade. Sold into criminal gangs as “white” women, women from these countries may find themselves trafficked to brothels in Russia, Turkey, Israel, the UAE, or other destinations. For countries like Ukraine and Moldova, where per-capita income is the same as in Sudan, human traffickers find ideal conditions, helping make human trafficking the third most lucrative criminal enterprise in the world, according to the United Nations. [continue reading]

The UK Foreign & Commonwealth Office (FCO) has uncovered a staggering 170,000 historic files that are overdue for review and release to the British public, VICE News has learned. On January 21, the FCO’s Minister for Europe David Lidington notified parliament that a “substantial number of legacy paper files” — meaning papers overdue for transfer to The National Archives (TNA) — had recently been located, as part of a massive audit of UK government offices and overseas posts. But Lidington provided scant detail of the intelligence contained in the documents.

The audit was launched in July, after FCO staff “became aware” that a number of legacy files were being held outside the FCO’s main archives — in offices across Britain and abroad. At least some of the files have been withheld from public view in breach of the Public Records Act, which requires that government documents be made public after 20 years (formerly 30 years), subject to legal exemption. [continue reading]