Lincoln and the Case for Ben Butler’s Colonization Story

150 years ago this week an unusual discussion took place at the White House. On a mid-April morning Maj. Gen. Benjamin F. Butler met with Abraham Lincoln to discuss what Butler later recounted as a proposal to resettle several thousand freed slaves on the Isthmus of Panama. It would prove to be their final encounter, as Lincoln was assassinated a few days later.

The Butler-Lincoln meeting is a contentious subject among historians owing to the implication that Lincoln intended to revive his black colonization program after the war. For many years the Butler anecdote was all but written out of Lincoln’s biography, and in some quarters it remains that way. As readers of this blog know, I demonstrated in a 2008 article that the Butler meeting did indeed converse with Lincoln a final time a few days before the president was murdered. [continue reading] 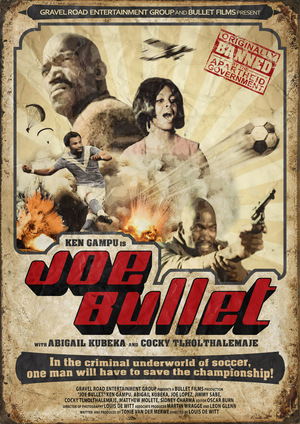 Last year, Tonie van der Merwe clutched that most Afrikaans of drinks, a double-brandy and Coke, as he accepted his Simon Sabela award as one of four “heroes and legends” at the Durban international film festival. “Without being racist, I thought a white guy won’t easily win a prize, but I was wrong,” he said from the stage, in his tux and big owlish spectacles. Certainly, few white guys in the new South Africa receive awards for films they made under an apartheid subsidy scheme to create films for black audiences. Yet here he was – 20 years after apartheid – his massive yet ambiguous role in South African film finally being acknowledged.

To many, the “B-scheme” movies he’d made – escapist fantasies, boys’ own adventures, morality plays – were the film equivalent of apartheid’s watered-down “native beer”, sold in government beer halls; a cynical National party-sponsored diversion designed to encourage the native population to stay on the reserves. At the end of one such movie, its star, Popo Gumede, turns to the camera to say: “All this violence could have been avoided if we just sat down and talked about it.” Others point to how seminal Van der Merwe was in setting up any kind of black film industry at all; to how seeing so many black faces on screen inspired a generation. [continue reading]

Consumers have made sure that Woolworths will never forget their botched attempt to cash in on the Anzac centenary. The supermarket giant this week launched a website that invited Australians to share memories of war veterans and upload a commemorative profile picture to social media. The site included a meme generator, which branded images of war dead with the Woolworths logo and tagline, “Fresh In Our Memories” – a staggeringly misguided pun evoking their corporate slogan “The Fresh Food People”.

Commemoration and commerce have become increasingly intertwined, and the Anzac industry is often more concerned with appealing to a mass market of consumers in their leisure hours, than with historical understanding.

Like the event it claimed to commemorate, the ill-conceived campaign resulted in a bloody confrontation and ensuing retreat. The backlash on Woolworths’ Facebook page was immediate. According to one commenter, “Trying to cash in on the memory of the Anzacs is possibly the trashiest thing I’ve seen in a very long time.” Another said the campaign reflected “Inconceivably poor judgment!”, adding “Not everything in the world needs to be appropriated for commercial gain”.  [continue reading]

The First World War had a seismic impact around the world, including Africa, as the British Council report Remember the World as well as the War reveals. Ahead of the BBC World Service’s broadcast of a debate on the war’s legacy in East Africa this Sunday, Dr Daniel Steinbach of King’s College London explains how the campaign in East Africa has been misremembered.

The ‘East African Campaign’ holds a peculiar position in the public memory of the First World War. Dozens of novels and one of Hollywood’s most famous films – ‘African Queen’, starring Humphrey Bogart and Katherine Hepburn – keep the cliché of an adventurous and somewhat unimportant side-show to the real war alive. The reality of four years of total warfare, which cost the lives of hundreds of thousands of people and affected many millions more, is largely forgotten. [continue reading]