In today’s history cosmos, terms such as ‘History from Below’, ‘People’s History’ and ‘Social History’ belong to the essential canon of most academics and students. Thus, it is important to remember how these terms found their way into historiography before they were considered legitimate. Members of the Communist Party Historians’ Group in the UK laid the cornerstone for a new paradigm in historiography, today largely referred to as Social History, in the late 1940s and early 1950s. But exactly how did these historians perceive their own role as academic insurgents in the heart of ‘Whig history’ and what were the problems facing them as historians and members of the Communist Party of Great Britain (CPGB)?

In late 1946 a group of historians, friends, and members of the Communist Party started regularly meeting in Marx’s House in London. By means of discussion papers, presentations, and conferences it was sought to alter the way the British people perceived their own history. Eventually, so was the audacious hope, a ‘history from below’ would empower the common people to emancipate themselves from the confining and patronising ‘high history’ of British monarchs, prime ministers and great thinkers, yielding the deeply entrenched notion of Britain as a nation of constant evolution, not revolution.

The Historians’ Group, a cultural branch of the CPGB, existed until the party’s dissolution in 1991. As Eric Hobsbawm, one of the founders and perhaps the most famous member of the Historians’ Group put it, the first decade of their existence from 1946 to 1956 ‘was the time when we really became historians.’[1]

Other contributing members who later significantly shaped British historiography were the likes of Christopher Hill, John Saville and Rodney Hilton. After the end of the Second World War and the joined capitalist-communist triumph over Nazi-Germany, these young men returned to their universities in Oxford and Cambridge to pursue their degrees in history or to continue in their strive for an academic career.

Their first meetings were dedicated to the re-evaluation of the historian Arthur L. Morton’s seminal work A People’s History of England published in 1938. Morton’s book was one of the first attempts to write a ‘history from the below’. Apart from this book, the works of Maurice Dobb and Dona Torr were guiding examples for the then young Marxist historians. As John Saville recalled, she ‘has taught us historical passion. For her the understanding of the historical process is an intense emotional experience. […] She made us feel history in our pulses. […] History was the sweat, blood, tears and triumphs of the common people, our people.’[2]

A full committee, meeting quarterly, and the smaller working committee, meeting monthly, administered the Group’s everyday work. In their meetings, elements of the Leninist principle of ‘Democratic Centralism’ were applied and are crucial to the understanding of the Group’s structure and function. This for instance becomes clear when looking at the question of the Group’s appeal to non-party members. As early as 1948 Eric Hobsbawm reported that the nineteenth century section ‘had objected to having a show of Party cards at their meetings on the grounds that the Historians’ Group was not strictly a Party organisation & that the Committee’s decision would discourage comrades from inviting sympathetic non-Party people to attend.’ However, the committee of the Group repudiated Hobsbawm’s utterance and insisted that the section was to show cards of the CPGB.[3]

Nevertheless, membership figures gradually increased in the first years and reached well over 100 people. In this context it is important to emphasise that not all Group members were professional historians, as their central aim was to appeal to amateurs interested in historical research. In terms of periods, the Group was divided into four main sections: ancient, medieval, sixteenth and seventeenth century as well as nineteenth century history. Attempts to foster student’s participation in order to recruit future academics for their purposes were however largely in vain due to lack of student engagement.

Did the historians’ membership in the CPGB impede on their academic truthfulness, and if so, how? As the committee minutes reveal, this was unproblematic so long as Hobsbawm, Hill et al. dedicated their scholarly work to subject matters lying outside the period of the CPGB or their Soviet mother party’s existence. As the Group initially did not enquire into the twentieth century, this was less of a problem in the first five years of their work. A polemical article published anonymously in the Times Literary Supplement doubting the historians’ capability to teach at British universities due to their hostility towards the Kingdom simply made them more adamant to prove their point.[4] Probably the most enduring testimony to this strive was the foundation of an own academic journal titled Past & Present in 1952. 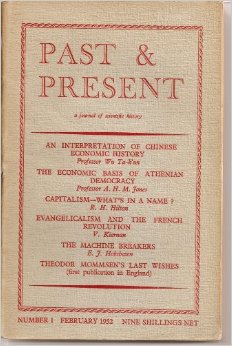 The 1950s, however, yielded growing tensions within the Group. The reasons were primarily twofold, though interconnected. On the one hand, the Soviet Union was in a phase of severe difficulties in the wake of Stalin’s death, the publication of the hitherto secret speech of his successor Khruschev, and their difficulties in sustaining the allegiance of Eastern European and Balkan satellite states. On the other hand, a growing aspiration, as evident from the committee minutes, to found a study section for the twentieth century made the limits of party membership evident. The Party executive member, James Klugman, subsequently deferred decision on the matter. Finally, the upsurges in Hungary in 1956 followed by the invasion of the Soviet Army made further membership for the vast majority of the Group’s leading members untenable.

Yet the dramatic irreconcilable break up of the leading circle of the Historians’ Group neither minimised their work in that formative period nor impeded on their future success as – in one way or another – Marxist historians. Although the events of 1956 left a deep scar in the souls of Hobsbawm, Hill, Saville or Hilton, they nevertheless stayed friends and continued in their pursuit of a ‘history from below’. Their persistence and conviction made their style of history writing, regardless of whether you were a Marxist or not, accepted and even cherished. The starting point was neither the uncritical acceptance of the ruling class ideology, nor the pattern of economic exchange of a given historical period. ‘Recognizing the inevitability of class conflict in class-divided societies, we attempt to redress the balance by reconstructing the inadequately recorded motives and aims, not of the oppressors, but of the oppressed.’[5] Despite the inherent difficulties of such an undertaking in a period where being openly Marxist or communist was a severe impediment for an academic career, this attempt proved successful, both for the historians themselves and for global and imperial historiography.

Gil Shohat is a postgraduate student in Modern European History at Humboldt University Berlin. He has conducted his research on the Communist Party Historians’ Group during his stay at the University of Exeter enabled through the ERASMUS+ exchange scheme in autumn 2015. He is now starting his postgraduate dissertation on the subject.