Thomas Zeiler is Professor of Diplomatic History at the University of Colorado Boulder. He has authored numerous books on U.S. diplomacy and globalization, including American Trade and Power (1992), Free Trade, Free World: The Advent of GATT (1999), Dean Rusk (2000), Globalization and the American Century (2003), and Unconditional Defeat: Japan, America, and the End of World War II (2004).

The “Conspiracy” of Free Trade: The Anglo-American Struggle Over Empire and Economic Globalisation, 1846-1896. By Marc-William Palen. Cambridge University Press, 2016 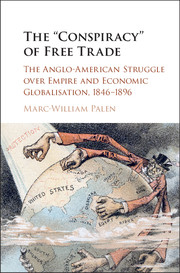 In the 2016 U.S. presidential election campaign, Bernie Sanders and Donald Trump made trade great again. That is, they reminded us that international trade policy, and particularly the American foreign commercial agenda, is as relevant today as it was in the nineteenth century, the last half of which is the era of focus for historian Marc-William Palen. The timing is striking. China has replaced European nations as competitors, and monetary manipulation and dumping rather than tariffs are the bete noires today. Yet contemporary protectionists are a throwback to expressions of economic nationalism last heard by a majority of politicians in the decades following the American Civil War. Protectionism guided American trade policies until the Great Depression, when freer (though still cautious) commercial relations traded places with the nationalism that had shaped the United States for its first century and a half.

The “Conspiracy” of Free Trade (the conspiracy a claim by American protectionists based in the Republican Party that British free traders were secretly trying to hinder U.S. prosperity at home and expansion abroad) is a corrective to decades of historiography that laissez-faire doctrine guided the Gilded Age. On the contrary, Palen’s sophisticated look into Anglo-American dialogue and domestic political maneuverings show that “ideological conflict between free traders and economic nationalists laid the imperial path for Anglo-American economic globalization” (xvi). His archival research is solid, though far surpassed by the extensive treatment of periodical and secondary sources; Palen has mined seemingly every commentary on the half century he covers. The author also lays out a simple binary of ideological visions – Cobdenite cosmopolitanism (the free traders) and a Listian nationalism (the protectionists) – that effectively expands the grand debate over the tariff into an even grander one over imperialism (and, in today’s terms, globalization).

The contributions to our understanding of politics and diplomacy of the critical last half of the nineteenth century are numerous. For starters, Palen fills a gap in the literature of the immediate post-Civil War period in diplomatic history, which has been scantily covered by historians. Second, he confronts the (now traditional) revisionist argument that the era was saturated by laissez-faire practice, when the reality is that American Cobdenites largely failed to move the needle toward free trade. This notion that protectionism actually prevailed is the most refreshing insight of the book, and the most controversial as well. Revisionists have ruled the historiographical roost when it comes to the Gilded Age, and the historical community has largely accepted their view that this was a hypocritically imperial period in which America pushed outward in the world but closed its own markets to outsiders through high tariffs. These free traders supposedly made peace with the British, and joined the European imperialist crowd, albeit mostly in an informal, trade-only way rather than by seizing territory.

The “Conspiracy” of Free Trade counters that protectionists pushed for an imperial age. We forget that Listian policies ruled in Washington, despite the coming Great Power status of the United States. Republicans twisted trade policy to fit their objective of imperial outreach abroad, and protectionism at home. They called this “reciprocity,” which shaped trade relations at least until the 1960s when tariff reductions in GATT became more sweeping. American Cobdenism did not keep pace with its British version until well after World War II, when U.S. power and politics had drastically changed from a half century before.

Will revisionists buy that argument – that nationalists (protectionists) won the argument and that, above all, the United States did not become a marauding imperial expansionist? I doubt it. Palen is no neo-liberal, and, like the revisionists, he links trade to foreign policy as well as connecting domestic markets to foreign ones. But he is no adherent to the old Open Door Wisconsin School of thought, a categorization that still resonates even though most of its leaders have retired from the academy. To be sure, they should be convinced that the Gilded Age narrative is more complex than their wielding of a formula in which free trade equals imperialism; their simplistic rendering of the era is a major weakness. They actually force their views into a history that, in reality, was not about free-trade corporate types run amok but nationalism training its trade guns on both protecting America’s market and pushing into the imperial game abroad. And these forces were not always aligned, as politics shifted and fortunes waxed and waned. As Palen shows in painstaking detail, trade was embedded in or tied to other seminal issues, including slavery and abolitionism, populism, economic development, and cultural notions of civilization. It wrapped together labor, manufacturers, farmers, and even women and African Americans, coast-to-coast, in the great debate over the tariff; Cobdenites and Listians themselves divided over degrees of free trade and protectionism and the goals they sought. Such complexity has not been a forte of the Open Door proponents, though it is of Palen’s book.

Drawing on extensive scholarship in British imperial history, Palen argues that whatever form of imperialism (formal, informal, non-commercial, etc.) occurred, the nationalists – and not the free traders – were often at the fore of economically integrating the Atlantic world, or smaller regions. This was an ideological matter, and not one driven by the quest for profits and material gain (or by such cultural trappings as race and gender, as is the common view in contemporary historiography). He is convincing (and, after all, foreign trade was never a sizable proportion of American wealth, as industry focused on manufacturing and selling in the domestic market) on the ideas side of the argument, which is his intention. Thus, it was “the prevalence of imperialism of economic nationalism – not the imperialism of free trade” (xxxvi) that was decisive, and that runs directly counter to the Open Door interpretation.

One criticism Palen will likely face is not that his evidence is mainly rhetorical. This is a book about ideology, and the debates, speeches, and political pressures that bolster ideas. Its sweeping chronology of a half century engages with British, American, and Canadian discussions by Cobdenites and Listians, as well as their target audiences. But how the debates were applied in real diplomacy, how the actual connections between rhetoric and economic expansion resulted, required more study. Revisionists will counter that a study of advocacy for one stance or another is not the same as proving the case in the real world. Imperial ventures, such as those in Samoa or Hawaii, serve more as a backdrop to Palen’s interest in ideology than as a cause and effect. Treatment of events were old-fashioned, perhaps owing to the fact they relied on secondary sources. That is unfortunate, because the author could have strengthened his argument that economics mattered, that protectionist nationalists were the real imperialists, and that the Open Door theory is just that – theory – by showing the intimate ties of ideas to diplomacy. James Blaine had a lot of ideas, and his Pan-Americanist vision did not come to fruition, but how did that failure relate to the tariff debate beyond putting him in one camp or the other? President Harrison” “imperial impulse” (195) was clear in the Caribbean and the Pacific, but how exactly did the McKinley Tariff shape his policies? Palen needed to spend more pages delving into history because his book suggests that empire and globalization were critical components of trade debates and policy, when, in his rendering, they come off as by-products.

Likewise, a fuller treatment of the British and American domestic scenes – mining into microhistories, say, of certain manufacturers, farmers, unions, companies, cities, regions, and the like – would have also put meat on the rhetorical bones of his actors. Who were the robber barons who benefited from Listian or Cobdenite thinking, and specifically, how? Did protectionist Listians pillage the governmental system in the United States as the Wisconsin Schoolers claimed they did, and in what ways? What were the specific links of corporations, as well as politicians, to the tariff? How deep ran anglophobia, and anglophilia for that matter, in the body politic? Palen is excellent on the interplay of ideology and politics themselves, but how Britain, and most important, the United States (and Americans) were actually shaped by this storm is also of import.

All said, this is a splendid book that is timely not just because of its foundation in current globalization, but because Listian nationalism still exists, in the form of Donald Trump. They pop up in election cycles or when trade policies reach the public arena, such as NAFTA in the 1990s, the WTO at the turn of the millennial, and the TPP a decade later – and now occupy the White House. Both eras’ protectionist creeds operate in eras of globalization when it was and is assumed that neoliberalism is correct and free trade is triumphant. Presidential politics has proven that assumption wrong, at least in rhetoric, and Marc-William Palen has successfully pointed out to us why that was so in history as well.

3 thoughts on “Zeiler on Palen, The “Conspiracy” of Free Trade”