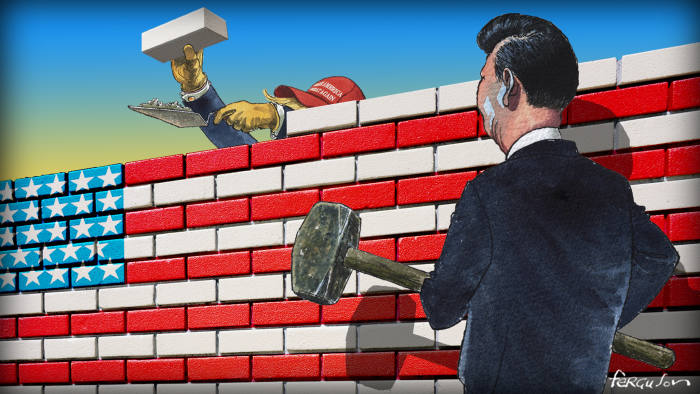 From Brexit’s reopening the wounds of empire to the imperial origins of Australia Day, here are this week’s top picks in imperial and global history.

The Empire Strikes Back

Joseph Chamberlain, it has been widely remarked, serves as an inspiration for Theresa May’s premiership. The great municipal reformer and champion of imperial protectionism bestrode the politics of late-Victorian and Edwardian Britain. He was a social reformer, a keen ­unionist and an advocate for the industrial as well as the national interest – all values espoused by the Prime Minister.

Less noticed, however, is that May’s excavation of Chamberlain’s legacy is a symptom of two larger historical dynamics that have been exposed by the vote for Brexit. The first is the reopening on the British body politic of deep wounds of race, citizenship and belonging, issues that home rule for Ireland, and then the end of empire, followed by immigration from the former colonies, made central to British politics during the 20th century. Over the course of the century, the imperial subjects of the queen-empress became British and Irish nationals, citizens of the Commonwealth and finally citizens of a multicultural country in the European Union. The long arc of this history has left scars that do not appear to have healed fully. [continue reading]

When Stuart Hall Was White

I do not recall when I discovered that Stuart Hall was black. Growing up in Britain as neoliberalism first began to take shape under the rule of Margaret Thatcher, I found that Hall’s work helped me comprehend what was happening to the world around me. I think I began reading him with “The Great Moving Right Show,” an article published in Marxism Today, the ecumenical and “reform”-minded journal of the Communist Party of Great Britain, in January 1979. It is the piece now celebrated as having named “Thatcherism” as a new political formation. Thatcherism, he argued, represented a new type of politics, one that had mobilized a populist revolt to Make Britain Great Again by running it like a business and stopping immigration. It is strangely unnerving to read it again now. Later that year Hall became a professor of sociology at the Open University and began to appear regularly on its television programs designed (in the era before profit-seeking online classes) for their distance learning, nontraditional, students. It was probably on one of those superb programs, no doubt several years later, that I first saw and heard Stuart Hall.

In retrospect, it is not surprising that I had once assumed Hall was white. Growing up in the countryside as a white middle-class boy, people of color were almost completely absent from my life. I suspect that I was not the only person to imagine he was white. There has long been a way of narrating Hall’s life and work that erases his formation in Jamaica as a colonial subject and a black man. It is a narrative that claims him as part of the British canon, as probably the country’s most influential social and cultural theorist of the late 20th century. It is a narrative that was rehearsed in many of the obituaries that followed his death in 2014. [continue reading]

What lessons on fascism can we learn from Africa’s colonial past?

Leslie James
Africa is a Country

Mainstream discussion of fascism took a dramatic upturn in 2016. While the term became one of the most incriminatory labels of the 20th century, the reassertion of far-right ideologies and previously fringe political groups across the globe, has reanimated popular debate about about fascism. Narendra Modi’s Hindu nationalism and stifling of dissent has been met with considered critiques of fascism in India. In Holland, France, Italy and Germany far-right populism threatens to engulf Europe in a succession of 2017 elections that has mainstream media asking whether this is Europe’s new fascism? The success of Nigel Farage’s xenophobic arguments during Brexit and the circus show of Trump’s rallies brought debates about the nature of fascism firmly into mainstream media discussion.

In the face of populist vitriol against foreigners and enemies, threats and intimidation, demagoguery, and a repositioning (or removal) of the state, its laws and institutions, the repertoire of fascism is under critical debate again. Yet, while fascist behavior often appears loud, aggressive, and speaks in matter-of-fact terms, Jane Kaplan has recently reminded us that fascism is “not just the big bang of mass rallies and extreme violence; it is also the creeping fog that incrementally occupies power while obscuring its motives, its moves and its goals.” To confront fascism we need to “look more closely,” not simply by debating whether the past fits the present, but by applying “the history we already know” in order to look anew at our current circumstance. But what is the history we know? [continue reading]

Mr Xi recognised that globalisation was not without difficulties. But, he argued, “blaming economic globalisation for the world’s problems is inconsistent with reality”. Instead, “globalisation has powered global growth and facilitated movement of goods and capital, advances in science, technology and civilisation, and interactions among people”. His vision matches that of the last US president to address the World Economic Forum. In 2000, President Bill Clinton argued that “we have got to reaffirm unambiguously that open markets and rules-based trade are the best engine we know of to lift living standards, reduce environmental destruction and build shared prosperity”. [continue reading]

Kristie Flannery
Not Even Past

January 26 is Australia day, a national public holiday where the good people of that great southern land celebrate ‘straya by taking a paid day off work, having a barbie in their backyards, and listening to Triple J’s countdown of hottest 100 songs of the year, all while wearing the country’s flag as a cape. Traditionally, these celebrations involve the consumption of copious quantities of alcohol.

But this year Australia day is surrounded in controversy.  January 26 is the anniversary of the 1788 British invasion of Sydney – the beginning of the violent British conquest and colonization of the Australian continent. The British stole Aboriginal people’s land (in one of the biggest acts of land theft in world history), and waged a genocidal war against the original inhabitants of Australia. Many Aussies are calling for the prime minister to #changethedate and move Australia day, because this important part of our history is not cause for celebration. [continue reading]