Cross-posted from Humanitarianism and Human Rights

In about a month the fourth Global Humanitarianism Research Academy (GHRA) will meet for one week of academic training at the University of Exeter before continuing with archival research at the ICRC Archives in Geneva. The Research Academy addresses early career researchers who are working in the related fields of humanitarianism, international humanitarian law, peace and conflict studies as well as human rights covering the period from the 18th to the 20th century. It supports scholarship on the ideas and practices of humanitarianism in the context of international, imperial and global history thus advancing our understanding of global governance in humanitarian crises of the present. 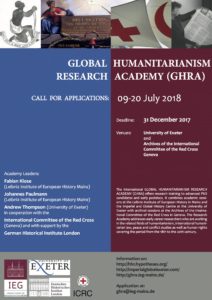 The GHRA received a huge amount of applications from an extremely talented group of scholars from more than twenty-one different countries around the world. The selection committee considered each proposal carefully and has selected these participants for the GHRA 2018:

Monique J. Beerli is a research associate at the Centre de recherches internationals and a visiting researcher at UC Berkeley. Her current project, Governing the Global Governors, received support from the Swiss National Science Foundation. In 2017, she received a double degree in political science from Sciences Po Paris and the University of Geneva. Her thesis, Saving the Saviors: An International Political Sociology of the Professionalization of Humanitarian Security, examined the genesis of security specialists within the humanitarian field and the effects of this professional transformation. Her work has been published in Global Governance, International Political Sociology, and International Peacekeeping.

Jennifer Carr is a second-year doctoral researcher, writing a medical history of refugee camps at the University of Glasgow, where she is also postgraduate co-convenor for the Glasgow Refugee, Asylum and Migration Network (GRAMnet). Her PhD, funded by a Wellcome Trust medical humanities doctoral scholarship, focuses on medical humanitarian action at times of emergency and the shift from crisis to development, with case studies of Sahrawi refugee camps in Algeria and Palestinian camps in Jordan. She has recently completed a residency at the Brocher Foundation in Geneva, and am an associate of emergency assistance charity, UK-Med.

Ryan Heyden is a PhD Candidate in the Department of History at McMaster University in Hamilton, Ontario, Canada. With his major-field in twentieth-century German history, his dissertation focusses on humanitarianism and the German Red Cross in the German Democratic Republic and the Federal Republic of Germany after 1945. In general, his interest in postwar humanitarianism stems from his Masters-level research on the expulsion and integration of Volksdeutsche (ethnic Germans) into occupied Germany after World War Two. He has also completed research on the politics of memory and commemorative practices in West Germany and in the Berlin Republic. Currently, an article about Germany’s Stolpersteine (Stumbling Blocks) commemorative project is under peer review with the German Studies Review. He won the Ezzo Cappadocia Prize in European History from his university for his Masters research.

Elena Kempf is a PhD Candidate in the Department of History at the University of California, Berkeley, where she is working on a dissertation titled “Unnecessary Cruelty: Weapons Prohibitions and the Laws of Armed Conflict, 1868-Present.” In it, she considers how certain weapons have come to be prohibited by international law, and what that boundary can tell us about changing limits of acceptable violence and shifting meanings of warfare. She is broadly interested in international humanitarian law, cultural histories of war, human rights, and German history.

Emma Mackinnon is currently a Junior Research Fellow at Emmanuel College, University of Cambridge, where she is affiliated with the Departments of History and of Politics and International Studies. She has research interests in international political thought, contemporary political theory, and the history of human rights. Her work has been published or is forthcoming in Humanity, Political Theory, and the Blackwell Companion to Arthur Danto. Originally from New York, she holds a BA from Harvard in Social Studies and an MA and PhD in Political Science from the University of Chicago.

Elisabeth Piller received her PhD from the University of Trondheim, NTNU, Norway in February 2018 with a dissertation on “German Public Diplomacy and the United States, 1902-1937”. She is currently developing a new project on the global history of the Commission for Relief in Belgium and will take up a post-doctoral position at University College Dublin in the fall of 2018. Her work has appeared in a number of journals and edited volumes including the Journal of the Gilded Age and Progressive Era, Immigrants and Minorities and the Journal of Contemporary History.

Christoph Plath received his B.A. in Philosophy and History as well as his M.A. in Modern and Contemporary History from Freie Universität Berlin. He started his Dissertation project “Contested Utopia. Collective Rights and the Conflictual Universalization of Human Rights, 1972 – 1986” in 2016 and since 2017 he is associated fellow of the Graduate School “Global Intellectual History” at Freie Universität Berlin. Christoph specializes in the history of human rights and his broader research interests include global intellectual history, international relations and digital humanities. Beside his research activities, he is member of the editorial staff of Zeitgeschichte-online since 2014.

Meghan Riley is a PhD candidate at Indiana University. Her adviser is Mark Roseman. She has bachelor degrees in European history and creative writing from the University of Oklahoma, where she graduated Phi Beta Kappa. At IU, she studies the work of American humanitarian aid organizations in French internment and concentration camps during the Second World War. She is a Saul Kagan Fellow for Advanced Shoah Studies and spent the 2017-2018 academic year conducting dissertation research in France as a Fulbright Fellow. Her work has been supported by the American Academy of Jewish Research as well as multiple departments and institutions at Indiana University.

Jakob Schönhagen, born in Tübingen, Germany, August 1 1989. Graduated high school in Rottenburg (Eugen-Bolz-Gymnasium), then completed University at Albert-Ludwigs-Universität Freiburg (English and History, Staatsexamen) with a dissertation on the Nazi exploitation of German Jews living in France from 1941-1944. He has since worked on a PhD-project funded by the DFG on the emergence of a worldwide refugee policy between 1950-1970, which is supervised by Prof. Ulrich Herbert at Freiburg University. A member of the Rottenburg City Council for five years, from 2009-2015, and currently the coach of Freiburg’s Volleyball Bundesliga Club and a writer for several newspapers and periodicals in South Germany.

Jiayi Tao is a PhD candidate in the Department of History at the University of Bristol, with a research interest in internationalism in twentieth-century China. Her current PhD research project explores the interaction of transnational humanitarian organizations, notably the United Nations Relief and Rehabilitation Administration, with local actors in post- Second World War China (1944-1949). This aims to broaden our understanding of the global history of postwar recovery through the example of the rehabilitation at the dawn of post-colonial era of a non-western sovereign state with the help of international aid.

Margot Tudor was awarded a First-Class BA (Hons) in History in 2016 and went on to complete an interdisciplinary MRes in Security, Conflict and Justice at the University of Bristol. During her Masters, she specialised in international law and the use of force and colonial continuities within the field of transitional justice, focusing on the ICC. In September 2017, Margot began her ESRC-funded PhD in Humanitarianism and Conflict Response at the University of Manchester. Margot’s thesis focuses on uncovering the colonial legacies in the practical delivery of humanitarian aid within the peacekeeping missions of the United Nations during the Cold War period.

Rebecca Viney-Wood holds a BA (Hons) in International History and Politics and an MA in Modern History from the University of Leeds. After completing her MA, she worked as a policy advisor for an NGO in Brussels and as a human rights observer in the West Bank. Returning to academia in 2015, Rebecca completed an MA in Humanitarianism and Conflict Response at the University of Manchester. Following this she was awarded an ESRC NWDTC Studentship with the Humanitarian and Conflict Response Institute (HCRI). Her PhD project investigates displacement in historical perspective, focussing on technologies of identification, apparatus and assemblages.