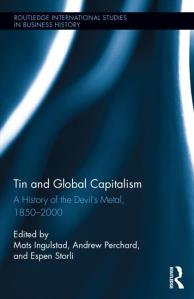 Tin and Global Capitalism, 1850-2000 traces the development of the industry from the ups and downs of the Cornish trade to the emergence of the Bolivian, Congolese and Malays as global players. Released on 27 August 2014, as part of the Routledge International Studies in Business History, the volume is the first collection to emerge out of the establishment of the History and Strategic Raw Materials Initiative (HSRMI), which we founded in 2012.

HSRMI was formed with the explicit intention of bringing together scholars working on what EC Vice-President referred to in 2012 as “raw materials diplomacy” from an historical perspective to utilise history to inform ongoing public debates about access to “strategic raw materials”. The importance of this is underlined by ongoing trade disputes over access to “rare earths” and other mineral deposits, as well as “resource wars” in Africa. Based on papers given at a conference on tin and the global economy at Harvard Business School in June 2012, the book intentionally explores the growth of global capitalism through the prism of the international trade in tin.

Central to this study is an appreciation of the interaction between business and government, the networks and links in the global tin supply chain, which shaped the international political economy of the metal. As Geoffrey Jones and Christina Lubinski (2012) recently observed the changing global political economic environment from the First World War onwards presented increased political risks for business: “In the broadest sense, the management of distance was replaced by the management of governments as a central challenge” (86-7).

This was particularly acute in the case of certain raw materials. Like other metals, such as aluminium and copper, tin became crucial to both warfare and welfare; As Joel Wolfe observes in his chapter in the collection: “There is a ubiquity to the tin can in the western Hemisphere… tin was a highly strategic material throughout the nineteenth and much of the twentieth centuries. Its military uses made it so. But consumers’ reliance on tinned foods gave the metal even greater strategic value.”(74).

President Dwight Eisenhower famously declared: “It would be much better to have tin in Fort Knox than gold” (Quoted in Dorn, 2011: 204). In his preface to the collection, Isidor Strauss Professor of Business History at Harvard Business School, Geoffrey Jones outlines the significance of this contribution:

“Both the empirical and theoretical literatures in business history and international business have remained heavily skewed towards capital-intensive manufacturing. This bias has left the study of large areas of the global economy related to business in natural resources and services surprisingly under-researched. A new wave of researchers, including the editors and authors of this book, are now moving the literature away from the familiar pastures of the past. The rewards are considerable.”

Traversing political institutions and business organizations, the tin trade was typified by a number of powerful and prominent figures – Simón Patiño, Mauricio Hochschild, and Felix Aramayo, Oliver Lyttelton, and Philipp Brothers – and their mastery of formidable networks. The collection includes chapters by long established scholars of the international tin trade – such as Roger Burt (University of Exeter) and John Thoburn (UEA) – as well as business, diplomatic and imperial historians. Chapters by Nick White (Liverpool John Moore’s University) on Malaya, Alanna O’Malley (Leiden University) on the Congo, and Mats Ingulstad on US strategic considerations explore imperial networks and changing international relations.

Regional tensions and business-political networks background Oscar Granados’s chapter on the Bolivian trade, while for the later period, Espen Storli examines businesses response to nationalization and their exploitation of institutional voids. Jonas Scherner (Norwegian University of Science and Technology) explores a recurrent theme in the history of “strategic” raw materials, that of strategic posturing and claims over “have” and “have not” nations, in relation to Nazi stockpiling of tin. Joel Wolfe (UMass, Amherst) discusses tin’s utility both for the army on the march and increasingly for the market for domestic comestibles. Andrew Perchard’s chapter explores the persistent and familiar rhetoric around “raw materials diplomacy”, and the importance of historical perspective to critically appraising this. As Perchard observes, the importance of interrogating the rhetoric of “strategic” raw materials matters because of the arising “…social, political, and environmental effects of displacement of communities, environmental degradation and pollution, and ‘resource wars’” (244).

More details about Tin and Global Capitalism can be found here. We are keen to encourage scholars – as well as businesses, policymakers and the media – to engage with the work of HSRMI. More details on the network can be found at: www.strath.ac.uk/business/hsrmi. You can also follow us on Twitter @HSRMI

Mats Ingulstad is Postdoctoral Fellow in the Department of Historical Studies, Norwegian University of Science and Technology (NTNU), and a co- founder of HSRMI. He is also co-editor (with Hans Otto Frøland) of From Warfare to Welfare: Business-Government Relations in the Aluminium Industry (2012) and (with Robin Gendron and Espen Storli) Aluminum Ore: The Political Economy of the Global Bauxite Industry (2013).

Espen Storli is Associate Professor in History, NTNU, and co-founder of HSRMI. Previously Harvard Newcomen Fellow, Harvard Business School, he is joint editor (with Gendron and Ingulstad) of Aluminum Ore.