BBC Radio 4 recently featured the Centre’s Dr. Gajendra Singh in its ‘Soldiers of Empire’ series, ‘The Fight for Fairyland’ (especially at 17 minutes and 26 minutes). This episode:

tells the story of the Indian Army on the Western Front, from disembarkation in Marseilles where the troops were greeted by excited crowds, to the grim reality of the trenches. Ill-equipped and inadequately trained for industrial combat, they nonetheless resolutely held one third of the British frontline between October and December 1914. 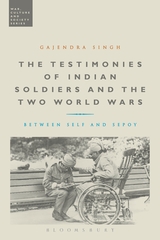 The programme also refers to Dr. Singh’s monograph on wartime soldiering identities and testimonies in the Indian Army, The Testimonies of Indian Soldiers and Two World Wars: Between Self and Sepoy. In the two World Wars, hundreds of thousands of Indian sepoys were mobilized, recruited and shipped overseas to fight for the British Crown. The Indian Army was the chief Imperial reserve for an Empire under threat. This book uses soldiers testimonies – chiefly letters, depositions and interrogations – to discover how Indian soldiers understood and explained their own war experiences, and to ask, how much did their testimonies reflect their own fragmented identities as both colonial subjects and imperial policemen?

Dr. Singh’s research focuses upon histories of colonialism in South Asia. He has particular interests in the hybridities of Empire – of the networks of peoples and ideas that could make even the most marginal individuals polyglot, multicultural bodies. He is currently involved in separate BBC radio and television productions exploring Indian revolutionary movements and Indian soldiers’ experiences of France during World War 1. He has also recently been interviewed for the ABC Radio (Australian Broadcasting Corporation) – ‘Other Voices, Other Battles’, ABC Radio National, June 2014 – and historical consultant to a radio play – ‘Subterranean Sepoys’ – supported by TARA Arts and the National Theatre.

One thought on “Exeter’s Dr. Singh Featured in BBC’s ‘Soldiers of the Empire’”