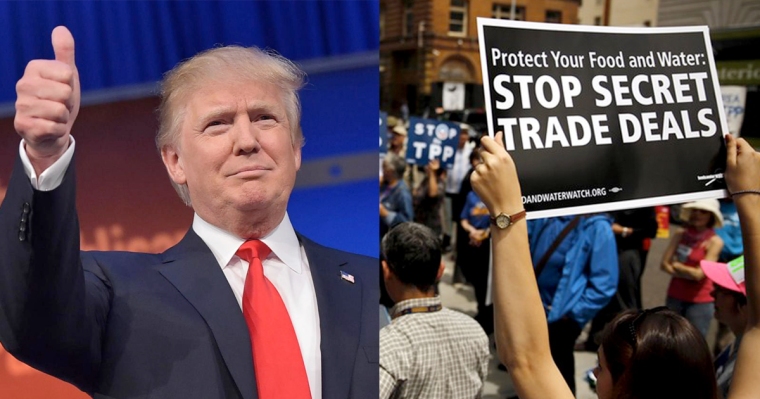 Cross-posted from the Conversation

As Donald Trump continues his quest for the Republican nomination, free trade agreements remain in his crosshairs.

The billionaire has been making waves by opposing American free trade initiatives like the massive Trans-Pacific Partnership (TPP) – just signed earlier this month by ministers of the 12 Pacific Rim member nations – and even the 21-year-old North American Free Trade Agreement (NAFTA). As Trump put it in November, right now “free trade’s no good” for the United States.

It may sound strange for the leading GOP candidate for president to be bad-mouthing free trade, but this is a protectionist sentiment that more and more Republicans appear to be warming up to.

It’s also a protectionist sentiment that’s drawn from the party’s paranoid past, as I’ve explored in my new book on Anglo-American trade.

Trump considers the TPP “a horrible deal … designed for China to come in, as they always do, through the back door and totally take advantage of everyone.” He thus conspiratorially sees a China-backed plot hidden behind the TPP, despite the fact that China is not actually involved in the TPP – nor is there really any back door.

Trump similarly considers NAFTA “a disaster,” and claims that he would either renegotiate it or “break it. Because, you know, every agreement has an end.” He proposes to replace NAFTA with a protective tariff directed against Mexican exports, a policy that would very likely result in a tariff war with the US’ third-largest trading partner.

Trump’s condemnation of free-trade initiatives and his conspiracy theories regarding Chinese-American trade are being treated as unorthodox. But they shouldn’t be.

Granted, at first glance his protectionist position appears at odds with the Republican Party’s current association with trade liberalization initiatives like the WTO, NAFTA and the TPP.

But connecting free trade with the Republican Party is, to put it mildly, very misleading. It is also a very recent phenomenon.

As my research on the history of US trade shows, the longer story of the Republican Party’s economic ideology illuminates how Trump’s protectionism and free trade conspiracy theories actually are quite in keeping with that of the GOP majority throughout most of its century-and-a-half lifespan.

It is well-known that the Republican Party was the party of antislaverywhen it was founded in the mid-19th century. Less well-known is that the fledgling party also wedded itself politically and ideologically to protectionism, dedicating itself early on to insulating American infant industries from the full force of global market competition, particularly from the more industrially advanced British.

With the end of the U.S. Civil War in 1865 and black emancipation, the Republican Party’s antislavery impulse waned. As a result, the party turned ever more to its ideological dedication to economic nationalism, advocating for greater American protectionism even as it turned awayfrom defending the civil rights of African Americans.

The Republican Party dominated the executive branch for nearly 75 years – from the 1860s to the early 1930s. Across this period they established and expanded their economic nationalist vision for the United States, implementing highly protectionist legislation in 1861, 1883, 1890, 1897, 1909, 1922 and 1930. During these decades and beyond, the Republican Party time and again stood in opposition to U.S. trade liberalization.

The Republican Party’s main spokesman on tariff issues by the turn of the century was a short, middle-aged politician from Ohio named William McKinley, who had well-earned his nickname “the Napoleon of Protection” by the time he was elected president in 1896. For him, protectionism was akin to a religion.

As the go-to Republican spokesman concerning the tariff – the most dominant political issue in late-19th-century America – McKinley time and again charged anyone who advocated for lowering the country’s high tariff walls with being part of a vast transatlantic conspiracy. He said it involved “free trade leaders in the United States and the statesmen and ruling classes of Great Britain” and that American advocates of free trade were secret agents of “the manufacturers and the traders of England, who want the American market.”

McKinley’s hostility toward free trade was the Republican rule, not the exception.

The GOP remained the party of protectionism for the vast majority of its existence, well into the Cold War years. As Eisenhower Treasury Secretary George Humphrey roared at a 1954 cabinet meeting to protest trade liberalization with Japan, Republicans “were protectionists by history.”

How quickly Americans have forgotten that for most of its long history the GOP has sought to build American protective tariff walls ever higher – higher even than Trump’s envisaged wall separating the United States from Mexico.

Historically, GOP support for free trade since the Reagan era is the anomaly – a stance that in the past decade has become ever more unpopular among the party’s supporters. Internal fissures continue to develop, as more and more Republicans oppose free trade initiatives.

In other words, Trump’s protectionism is no radical departure from the party line. Indeed, it is very Republican.

Dr. Marc-William Palen is a historian at the University of Exeter. He is the author of The ‘Conspiracy’ of Free Trade: The Anglo-American Struggle Over Empire and Economic Globalization, 1846-1896 (Cambridge University Press, 2016). His commentary on historical and contemporary global affairs has appeared in the New York Times, the Australian, the Globalist Magazine, the History News Network, History & Policy, Foreign Policy in Focus, and Common Dreams, among others. He is the editor of the Imperial & Global Forum, the blog of Exeter’s Centre for Imperial & Global History. Follow him on Twitter @MWPalen