When thinking about today’s phenomenon of ‘fair trade’, it immediately brings to mind coffee with the ‘fair trade’ tag, nowadays seemingly found in just about every supermarket. But if we go back to fair trade’s origins in 1968, these same coffee smallholders were nowhere to be found in the burgeoning movement’s founding document, the Haslemere Declaration. So how did we get to where we are today?

The 1968 Haslemere Declaration and the Origins of ‘Fair Trade’

Published by a group of British activists in April 1968, the declaration was quite politically focused. It instead called on the West to abolish all tariffs and quotas and finally adhere to its own rules of ‘fair trade’ as laid down in the 1947 General Agreement on Tariffs and Trade (GATT; since 1995, the World Trade Organization, WTO). So then what did these activists mean by ‘fair trade’? In the 1968 declaration, this loose organization of academics, journalists and employees of British charities situated ‘fair trade’ in the context of Britain’s international trade policy:

In the next three years, Britain should make a unilateral start to the reduction of tariffs, subsidies and other trade restrictions. It should make sure that, in the next round of GATT negotiations on trade restrictions, the problems of developing countries receive a priority on the agenda, and that at it [sic!] other countries are asked to follow Britain’s example.[1]

In other words, ‘fair trade’ meant that not only should ‘rich countries’ like Britain allow producers in third-world countries to sell their agricultural commodities freely in Europe; they should also support poorer countries in their goal to become industrialized and compete with the West on a ‘fair’ basis. Seen from today’s perspective, what’s surprising about the Haslemere Declaration is that the term ‘fair trade’ was used specifically within the context of the GATT. The declaration called for the industrialization of the South and for the UK and the West to open their markets to the South; it was highly critical of the UK joining the European Common Market and called for the West to abolish all kinds of agricultural subsidies. And yet the fair-trade labels on coffee, cocoa, bananas, and sugar are a legacy of the Haslemere group.

How this happened is a bit convoluted. None of the members of the Haslemere group, for example, were directly associated with the commercially registered fair-trade label implemented since the 1990s.

Here’s how the Haslemere group left their imprint on today’s fair trade label. One of the authors of the Haslemere Declaration was the agricultural economist Jonathan Power, later known as a journalist and human rights activist. Others went on to become professors at the London School of Economics or at Oxford. From the outset, they were activist academics and, therefore, different from the professional staff of modern NGOs. However, these activist academics managed to push British charities towards more political campaigning in general and particularly against the Common Market.

In Oxford, within the orbit of Oxfam, the academic movement lived on a couple of years after the first gathering in the town of Haslemere in Surrey. In other university towns, Haslemere groups popped up and met for discussions, film screenings, and picketing in front of Barclays’ branches to protest the bank’s involvement with South African apartheid. The newsletter known as the Paper Tiger connected the Haslemere groups in Britain and can be examined today at the Bodleian Library in Oxford.

The Haslemere groups organized several conferences, including the ‘Poverty is Violence’ conference in London in 1969. The conferences featured Black Panther members, South African apartheid critics, and Latin American bishops as speakers, and they attracted European activists who travelled to the UK and brought the Haslemere Declaration back to their own countries. Among the foreign activists in attendance in 1969 was a Swiss economics student named Rudolf Strahm. He attended the conference ‘On Race and Poverty’ in Manchester and brought copies of the Haslemere Declaration back to Switzerland. Strahm thereafter founded the Third World Action Group AG3W, known for being taken to court by the Swiss multinational corporation Nestlé for translating the British booklet on infant formula sales in developing countries titled ‘The Baby Killer’. The booklet insinuated that Nestlé was responsible for killing babies by convincing African mothers without access to clean water and baby bottles to use infant formula.

Furthermore, the AG3W group used Rudolf Strahm’s Master thesis in economics on Swiss import quotas as an academic basis for the first sale of a ‘fair’ instant coffee in Switzerland in 1973: The whole point of the sale was to sell a processed product from Africa and not the commodity. The posters and leaflets informed buyers about unfair Swiss import quotas on processed goods from the South, and that the instant coffee from a factory in Tanzania was cheaper than Nescafé from Nestlé! Not aid – but rather trade – needed to be fair. 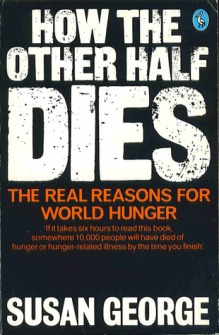 The sale of Tanzanian instant coffee was again mentioned in 1976 as an example of a ‘commodity campaign’ in Susan Georges’s bestseller, How the Other Half Dies: The Real Reason for World Hunger, which again underscored the argument that fair trade was originally about overall fair trade relationships between North and South that should eventually lead to the South processing its own commodities and competing with Western multinationals on an equal basis:

In Switzerland, one group set out to sell Tanzanian coffee, processed in Tanzania and of direct benefit to Tanzanian Ujamaa villagers; they also chose this commodity in order to publicize the unfair trade relationships between First and Third World and the role of Nestles in the control of the coffee trade.[2]

Moving back to Britain, after the Haslemere Declaration in 1968, activists published several booklets, most of them in cooperation with Oxfam’s new youth organization, Third World First (known today as People & Planet). Among the booklets were a reading guide on development economics and research on Barclays Bank’s involvement in apartheid in South Africa, as well as booklets on coffee, cocoa, bananas, and sugar, explaining the international trade negotiations and accusing the West of hypocrisy for preaching free trade while building a neo-protectionist wall around the Common Market. By the mid-1970s, however, the Haslemere group had not managed to transform itself into a professional NGO, and it began to falter.

The demise of the Haslemere group made way for the commercial and non-political concept of fair trade that we are familiar with today, one associated with smallholder farmers producing a tropical commodity. But the group’s influence and legacy remained. And the Haslemere activists also convinced British charities involved in the fair trade movement to adopt a critical stance towards the Common Market in the years before Britain’s access in 1973. Most influential here was Jonathan Power’s 1969 campaign booklet titled The Commonwealth and the Common Market for the charity Christian Aid, in which he wrote: We should ask ourselves very seriously if going into the Common Market will be just another nail in the coffin of the Third World.[3]

So too, in Switzerland, a wide coalition of activists stated in 1970 that they would oppose Switzerland’s entry into any supranational organization that would disadvantage market access for developing countries.

However, following the oil crisis in 1973 and the world food crisis in 1974, ‘fair trade’ development thinking underwent a profound conceptual change. The stereotype of the smallholder farmer now appeared on the scene as the saviour from hunger in the South and pollution in the North. Multinational organizations and companies replaced the Western nation-states as villains.

Susan George – in her seminal book – asked housewives to hold ‘commodity campaigns’ and associated the term ‘fair trade’ with the peasant smallholder, both of which were considered antagonistic to multinational agribusiness and the supranational organizations.

The original academic and political concept of fair trade that hade been associated with the GATT had vanished from public perception. Academic studies were replaced by a wordless symbol printed on our coffee cups today.

And yet, fifty years later, as smallholder coffee with a label and a charity surplus is sold in the supermarket next to ‘proudly British’ apples and Spanish oranges, the Haslemere Declaration’s political message still resonates. Do fair traders still believe that tariffs, subsidies and other trade restrictions should be reduced on imports from developing states? Do fair traders still believe that coffee should be processed to instant coffee in a factory in the country of origin? And – a quarter of a century after the fall of apartheid in South Africa – is it still necessary to buy European apples and oranges and not South African products? What, again, is fair trade?

2 thoughts on “What ‘fair trade’ was originally about: The Haslemere Declaration of 1968”