Cross-posted from Care for the Future

As historians have engaged in a widespread and heated discussion about the history of human rights and its relationship to contemporary political and social developments around the world, many have also turned to humanitarianism. With new and protracted conflicts raging in the Middle East and other parts of the world, and with the growing number of natural disasters caused by a rapidly changing climate, humanitarian workers and organizations are busier than ever before. And yet, the scholarly literature on humanitarianism and the labours of humanitarian workers since the 1700s was, until the last decade or so, focussed mainly on humanitarian aid delivered to various sites of conflict after the end of the Cold War. Political scientists were the primary researchers pushing this field of humanitarian studies. Thankfully, historians have joined this scholarly discussion, adding a much-needed historical perspective. Historians at all levels are trying to understand the origins and development of humanitarianism, asking many vital questions:  what has mobilized empathy for those suffering during war; how has humanitarianism been used and abused by the West in its effort to colonize the Global South; how can we understand the often-fraught gender and power dynamics involved in humanitarian campaigns and in the administration of aid; and, what is the relationship between humanitarianism and human rights? Scholars are also historicizing humanitarian institutions – like the International Committee of the Red Cross (ICRC), Oxfam, Médecins Sans Frontières, CARE, and older institutions that tried foster “humanitarian sensibilities” like religious groups (missionaries) and the abolitionist movement – and asking how they fit into this budding historical narrative? 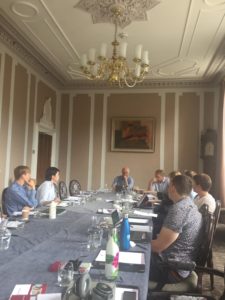 This rather brief outline of the field and its vital questions are merely a sampling of the work being done by historians around the world. It is also a snap shot of some of the themes I took away from this year’s iteration of the Global Humanitarianism Research Academy. In July 2018, I had the privilege of travelling to the University of Exeter in the UK and the International Committee of the Red Cross (ICRC) Public Archive and Library in Geneva, Switzerland with the generous support of Care for the Future, the Leibniz Institute for European History, the German Historical Institute in London, and the ICRC. During my two-week intensive workshop and archival work, I had the pleasure of meeting and exchanging views with established scholars, newly-minted PhDs, and fellow PhD Candidates. I learned a lot during what can only be called a two-week academic adventure! While I could probably write ad nauseum about what I learned, my archival finds, and the people I met, I want to draw attention to a few lessons. END_OF_DOCUMENT_TOKEN_TO_BE_REPLACED

AHRC Care for the Future, in partnership with Exeter’s IIB and the GHRA 2018, invited Markus Geisser, Senior Humanitarian Policy Advisor at the International Committee of the Red Cross to give a public keynote at the Royal Albert Memorial Museum & Art Gallery Exeter. Markus looks back to a long career as humanitarian practitioner and accordingly he referred in his talk to this long experience.

Markus joined the ICRC in 1999 and carried out his first mission as an ICRC delegate in the Democratic Republic of Congo (DRC). This was followed by several years managing field operations in Myanmar, Thailand, Liberia, Darfur (Sudan) and then again in eastern DRC. From 2006 until 2013, he worked in senior management positions in countries affected by the so-called “Global War on Terror”, first in Iraq and Jordan, then in southern Afghanistan and in Washington DC. From 2013 until 2015, he served as Deputy Head of the division working on humanitarian policy and multilateral diplomacy at the ICRC’s headquarters in Geneva. In March 2015 he joined the ICRC Mission to the United Kingdom and Ireland as Senior Humanitarian Affairs and Policy Advisor. 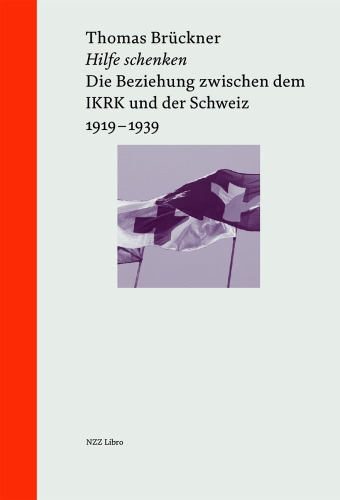 Switzerland is uniquely positioned as host of the International Committee of the Red Cross (ICRC). Swiss neutrality, Swiss humanitarian policy, and the Swiss flag are often associated with the Red Cross. As a result, a special relationship has developed between the country and the international humanitarian organization. My book, Hilfe schenken. Die Beziehung zwischen dem Internationalen Komitee vom Roten Kreuz und der Schweiz (NZZ Libro 2017), critically explores this relationship during the period between the two World Wars (1919-1939) using sources from the ICRC archives, the Federal Archives of Switzerland, and a wide range of publications and private archives in Switzerland.

At first sight, the interwar years were a calm period for the special relationship. Looking closer, however, exposes how the relationship between the ICRC and Switzerland changed and strengthened during this time, foreshadowing criticisms during Second World War that the axis between Bern and Geneva had become too close to guarantee truly neutral and independent humanitarian aid. END_OF_DOCUMENT_TOKEN_TO_BE_REPLACED