The Centre for Imperial and Global History is pleased to announce its new ‘Talking Empire’ podcast series. Hosted by Professor Richard Toye, Centre academics are developing a series of podcasts on controversies in global and imperial history, which are available to listen to for free on this page. 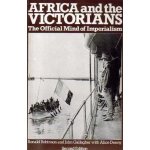 With this first installment, Centre Director Andrew Thompson discusses the longstanding debates surrounding the work of Jack Gallagher and Ronald Robinson. In their path-breaking 1953 Economic History Review article, ‘The Imperialism of Free Trade’, Gallagher and Robinson suggested that the so-called ‘New Imperialism’ of the late nineteenth century was not new at all. They argued instead that imperial historians had previously missed Britain’s informal imperial expansion following its adoption of free trade policies c. 1850. The authors expanded further upon their informal imperial findings with Africa and the Victorians: The Official Mind of Imperialism (1961).

Listen to the three installments of Andrew Thompson discussing the controversial legacy of Gallagher and Robinson:

Episode one: Jack Gallagher, Ronald Robinson and ‘The Imperialism of Free Trade’ [Listen]

Richard Toye and Andrew Thompson discuss the partition of Africa in the late nineteenth-century and the famous phrase ‘the official mind of British Imperialism’.

Richard Toye and Andrew Thompson discuss Robinson and Gallagher’s contribution to the vocabulary with which we think about empire today.

More to come soon, so keep checking back on our blog!