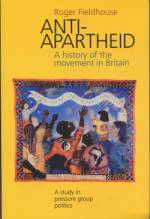 In recent weeks, the Imperial & Global Forum has explored the Anti-Apartheid boycott’s relationship to the modern ‘fair trade’ movement and the historiographical black hole of the apartheid regime itself. But who supported the British Anti-Apartheid movement, and what was its local, national, and global strategy?

The British Anti-Apartheid movement originated in 1959 as a small group of South African exiles and other African students in London promoting a boycott of South African goods. After the Sharpeville massacre in March 1960 it began to attract British support, reforming as the Anti-Apartheid Movement (AAM) in April. It quickly identified its aims: ‘to inform the people of Britain about apartheid…; to campaign for international action to help bring the system of apartheid to an end; [and] to cooperate with and support South African organisations campaigning against apartheid.’ [1]

In practice much of its energy was spent on trying to persuade successive British governments to change their policies regarding South Africa. For many years this met with very little success regardless of whether the Conservatives or Labour were in power, for two reasons. Firstly, British business had huge investments in South Africa and the two-way trade between the two countries was considered vital to both. (For a long time even the British trade union movement supported this line for fear of job losses if this trade was threatened by sanctions.) Secondly, South Africa was regarded as an important military outpost of the western anti-Soviet alliance during the Cold War, in particular as a deterrent to Soviet naval expansion in the Indian Ocean. 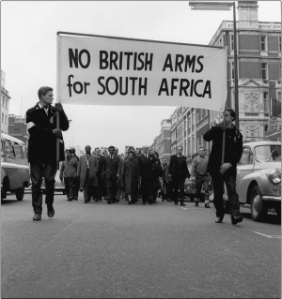 Over the years AAM developed a number of campaigns in pursuance of its aims. First and foremost was the boycott of South African goods, which attracted widespread public support without ever seriously denting this trade. Gradually more effort was put into trying to persuade the Government to impose sanctions on South Africa but to little avail. Much the same was true of AAM’s very well researched arguments for an arms embargo. More successful than these attempts to change government policies directly were the campaigns such as the sports boycott, cultural boycott, and academic boycott aimed at changing public opinion and gaining public support for pressure on the Government.

Another successful strategy was building alliances with social groups and organisations such as churches, religious organisations and trade unions. Although AAM did establish its own national network of local groups it was never a mass movement so these alliances with other organisations were an important means of creating grass roots support. The same was true of developing close relations with (mainly Labour controlled) local authorities which in the 1980s led to the establishment of a powerful ‘Local Authority Action Against Apartheid’ movement and the adoption of comprehensive local anti-apartheid policies and activities.

Ultimately the campaign to discourage economic collaboration and investment in South Africa was probably the most significant and influential of all AAM’s campaigns.  It helped to stimulate an eventual worldwide reluctance to invest in, or lend to, South Africa that was the major external force in bringing the apartheid regime down. [2]

In order to maintain its largely middle-class, liberal support base AAM was reluctant to publicly acknowledge the help it received, especially in the early days, from the British Communist Party.  For the same reason it shied away from direct-action politics, which brought it into conflict with far-left groups in Britain in the 1980s; and avoided giving public support to armed  resistance in South Africa. This caused some rifts in what generally was a close relationship with the ANC.

There were other occasions when AAM’S primary role of influencing the British Government and the ANC’s priority of building a resistance movement in South Africa deviated somewhat.  This was particularly true in the late 1980s and early ‘90s when the ANC was engaged in serious negotiations to end apartheid. In doing so it had to accept many of the demands of international capitalism and adopt a two-stage revolutionary strategy (i.e. national revolution first, leaving its socialist objectives for a later day – which still hasn’t come). AAM experienced some difficulty in keeping up with, or agreeing to, some of the compromises the ANC felt compelled to make in those last years of the struggle.

For some thirty-five years AAM maintained a multifarious local and national campaign against apartheid, whether it was boycotting outspan oranges, disrupting Springbok rugby and cricket matches, constantly arguing the case for economic sanctions or an arms embargo, lobbying the annual Commonwealth prime ministers’ conferences, amassing information and compiling dossiers on the major companies and banks with close economic ties to South Africa, building an international movement, giving succour to the ANC and other liberation movements, or promoting the Free Mandela campaign culminating in the Mandela 70th birthday concert at Wembley in June 1988, watched by an estimated 500 million people around the world.

Not all of these and AAM’s many other activities were outright successes but cumulatively and collectively they placed and kept apartheid on the political agenda so that it could not be ignored. ‘It was indeed all these anti-apartheid pressures, direct and indirect, over many years…that created the climate for change and forced the business and banking world to impose the harsh financial sanctions after 1985 that finally triggered the collapse of the apartheid regime.’ [3]

For more on the British Anti-Apartheid Movement, be sure to read Roger Fieldhouse, Anti-Apartheid: A History of the Movement in Britain (2005).

5 thoughts on “The British Anti-Apartheid Movement: A Brief History”