Complete autonomy in the waging of war is a proud attribute of countries like Australia. It has been so ever since the imperial crown finally got around to delegating this aspect of the royal prerogative to peripheral nations of the British Commonwealth in the wake of World War II. But with power comes responsibility, so the old adage goes, otherwise complacency is allowed to set in, blurring history and politics in the vindication of bellicosity abroad. If this trend cannot be countered with expressions of criticism, then history suggests that we might well have surrendered, for the time being at least, all expectations we might have for pacific reforms of any kind.

Chris Masters, a prominent Australian investigative journalist, has just published a book, No Front Line (2017), which provides a glimpse into the lives of that country’s special forces serving in Afghanistan. Eyebrows have been raised at the description it carries of an incident in June 2006, which saw an unarmed Afghani man gunned down by Australian soldiers fearful of revealing their secret location. 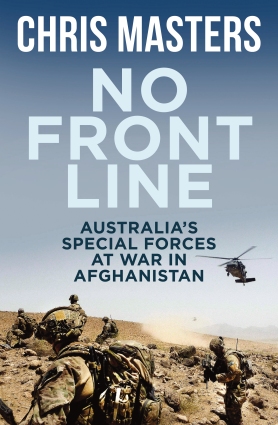 Sadly an affray like this is unexceptional in the scope of any war featuring foreign troops placed into a region and given objectives to defend their positions against elements of the population hemming them in. And its coverage in the book is even-handed, one of many incidents catalogued by the author in a mostly bland way, rescued only by the occasional quotation of soldiers accounting for the performances of their ‘mates’ with unflinching manliness.

What makes the incident noteworthy is Australia’s remarkable inability to separate the politics of war from the commemoration of its victims. Unhelpful here are the apparent aversions, more generally, of senior public servants, journalists, and returned soldiers to articulate with any nuance some of the problems associated with the politicisation and memorialisation of Australian participation in foreign wars. These might be the symptoms of a deficiency of criticism in popular discourse. They might rather suggest an intolerance to history. In any case, here is an ailment that can be treated by insisting upon an observation of war not just as a policy but, more importantly, as an idea plenty quarrelled over, across empires and epochs, and through time and space.

The incident involving the dead Afghani man would not have become a political football had it not been for one of the soldiers involved in the attack speaking out against the ‘un-Australian’ parts of the book. This prompted the Director of the Australian War Memorial, Brendan Nelson, to excoriate the author in question for ‘tearing down our heroes’.

Nelson has reason to be protective of his own legacy. As caretaker of the Defence portfolio over the course of nearly two years, he oversaw a number of operations carried out in Afghanistan with unobvious long-term benefits. It was in this window that both the Afghani man and the Australian soldier who shot him were killed.

So Nelson was probably speaking with this legacy more in mind than his responsibility as the director of the shrine, archive, and museum in Canberra, when he said the following (paywall):

The average Australian is not generally stupid and they know that things don’t always go according to plan in war and that armchair lawyers and others on their sanctimonious thrones should not be shaping our attitude to what in the end are very serious military actions necessary to deal with – people that threaten our freedoms and our values.

It’s probably unobjectionable that ‘the average Australian’ should think of wars as unpredictable and unwished-for things. It should be granted, however, that it might be a tough ask for him or her to identify the reasons which compelled the Australian Defence Force to go into Afghanistan in the first place, much less the reasons behind their remaining there today (at a cost of $8.5/£4.9 billion and rising). The bigger problem, of course, is what follows this platitude: namely, nude condemnation of the spirit of critical enquiry into the causes and consequences of war.

Criticism of martial conduct is a necessary condition for the development of ameliorative reforms of war. Historians of ideas can hold this to be true for many centuries before the Federation of Australia.

Rich traditions of reflection upon the justice of war can be identified in the writings of men far removed from the battlefields of war across the ancient world, from Mesopotamia, across the Zhou and Qin dynasties, and into Greece, then Rome. Centuries later, as the Crusades petered out, Aristotle’s ethical model of a ‘just war theory’ was revived and sophisticated by the theologian Thomas Aquinas. Crucial to the development of a coherent law of war were the generations of canon lawyers to follow him, none, to my mind, so brave and original as the Polish rector, Paulus Vladimiri, one the few working within the church prepared to regulate the pope’s ‘holy wars’ upon ‘infidels’. Then in the sixteenth and seventeenth centuries, finding a place for war in the laws of nature and nations fell to a new cohort of scholars with uneasy consciences troubled by reports of catastrophic bloodshed in the Americas.

Historians of the British Empire will detect a similar trend.

For instance, every single war of the East India Company inspired raucous debates in pamphlets and parliamentary sessions in London, until eventually the corporation was defanged of its military autonomy after 1784, and finally severed from its army in 1858. Meanwhile, reports of atrocities on both sides of the American revolutionary conflict of the late eighteenth century discouraged many in government from continuing that war any longer than it had to go on.

Moving into the nineteenth century, it should be noted that every significant instance of rebellion and martial government on the peripheries of the British Empire became subject to the condemnation of the liberal press and humanitarian societies in the major cities, bile which led, if sometimes in a roundabout way, to a number of reforms both to colonial government and the military. Such was the case not only in India, where the ‘scandals of empire’ were barest, but also in Barbados, New South Wales, Ceylon, Demerara, the Canadas, Cephalonia, the Cape of Good Hope, St Vincent, Jamaica, and New Zealand, to name a few places.

It may be true to say that nowhere was the brutality of the empire less refined than it was in southern Africa: after Cecil Rhodes laid waste to amaNdebele with maxim guns in 1893 and Leander Jameson organised a rebellion to overthrow Pretoria in 1895, concentration camps were established and unlawful executions were carried out between 1898 and 1902.

But it’s also true to say that imperial practices of this brutality came to be stowed away following a number of investigative publications, parliamentary enquiries, and legal proceedings in London as a result of these egregious transgressions.

In their aftermath, a string of treaties, conventions, and institutions were created, the cumulative result of which was the outlawing of offensive wars of the same kind. Without any sense of indignation at the scale of those tragedies, it would have been impossible for this group of internationally minded, humanitarian critics of war to have detected any need to make them illegal.

Granted, throughout history critics of war were sometimes motivated for the wrong reasons. For many of them, their pacifism was superficial at best, and blinkered with xenophobia at worst.

This complexity makes it all the more difficult to make sense of Nelson’s generalisations about ‘armchair lawyers’.

Presumably Nelson was using this expression with the author No Front Line in mind; it’s less conceivable that he would have used such a term in reference to those currently conducting an official enquiry into Australian war crimes in Afghanistan. That would imply an attempt on Nelson’s part to pervert the course of justice.

So I wrote to the Australian War Memorial for clarification as to the meaning of the expression. Nelson gave me the following response:

I would regard [‘armchair lawyer’] as referring to someone who processes technical and academic expertise in a particular field of endeavour but who is removed far from the matters about which he/she passes judgement. Further, some such individuals pass judgements on individuals and circumstances through the prism of life experiences and context alien to those about whom they are deliberating.

The irony of this should give us pause to think even more about the kind of people who are allowed to speak for public memory, especially in this moment of renewed attention to the tragedies of imperial expansion and the means by which we acknowledge them in Great Britain and across the world.

Nelson was appointed to lead the Australian War Memorial in 2012 to preside over the most important period to date in the popular history of war: the passage of a hundred years since the Great War and its sundry tragedies. His appointment also occurred at a time when jobs for professionals trained in heritage studies and history, in Australia and elsewhere, were few and quick to be snatched up, with the sparsity of positions becoming even more dire since then. This was some armchair to land in, then, for someone who had neither studied history at university level nor served in the Defence Force before his appointment. And whatever else might be said for his career in the Australian parliament – a battleground of sorts – his biggest achievement as Minister of Defence was the purchase of 24 out-of-date fighter planes with limited practical utility.

Letting people get away with deriding critics of war as ‘armchair lawyers’ unchallenged is very nearly tantamount to accepting that Commonwealth countries like Australia, having escaped from their subordinate position in foreign relations under Great Britain, should now carry out their wars abroad comfortably immune from scrutineers in Canberra, London, or Kabul.

When faced with obviously political comments made by high public servants responsible for keeping an archive in order, it’s all the more crucial that historians do what they can to defend anyone prepared to query episodic malpractice in martial conduct. More than that, it is our duty, I think, to remind all amnesic antagonists of peace that we expect greater thoughtfulness when it comes to the memorialisation of war.

Dr Edward Cavanagh (University of Cambridge) is preparing a book on war and government in the British Empire.