During my trip to Exeter to attend the Britain and the World Conference earlier this year, I discovered that the Royal Bengal Tiger on display in the Royal Albert Memorial Museum (RAMM) was a gift from King George V (1865 – 1936). Exeter’s Bengal tiger was one of 39 tigers the King had killed during his hunting excursion in Nepalese Terai in 1911 – the year of his grand Coronation Durbar in India. The accompanying plaque states that the King presented tiger skins to British museums so that visitors who have never seen a tiger could meet one face-to-face. Like any responsible museum, RAMM’s curators have taken care to send a nuanced message through its natural history exhibits. They raise our environmental guilt, they remind us of nature’s destruction in the hands of man. Tiger hunts in India have a rich history of their own, and that Exeter has somehow been made part of that history had me intrigued.

Tiger hunts have remained enduring images of extravagance and might of the British Empire in India, and inspired a widely popular imperial mythology as perhaps most famously portrayed in Rudyard Kipling’s The Jungle Book (1894). During the Victorian era – the heyday of the tiger hunt – there emerged an extensive hunting literature devoted to shikar, the Hindustani and Anglo-Indian term for the hunt. Shikar literature popularly glorified adventure, exploration, and collaboration with the natives during the hunt.

Most shikar memoirs were written either by vacationing army men or foresters, who had ready access to forests they looked after. For example, in his vividly illustrated hunting book Tiger Shooting in India (1857), Lieutenant William Rice boasted of being an expert on tiger shooting. In The Wild Sports of India (1857), Bengal Army Captain Henry Shakespear recommended hunting because it was the perfect masculine sport to keep British soldiers away from alcohol and women. Colonel Julius Barras wrote about his long adventure-filled career in India in a two-volume India and Tiger-Hunting (1885).

These were the days of flamboyant empire, with little or no restriction on hunting activities. According to one popular estimation, 80,000 tigers were killed between 1875 and 1925.[1] Hunter-turned-conservationist E. P. Gee estimated that at the beginning of the twentieth century Indian tigers numbered around 40,000, and by 1964 their numbers had dwindled to a meagre 4,000.[2]

But even as hunting continued unabated, at the turn of the century an attitudinal shift to hunting in general was gradually taking hold in the upper circles of the colonial government. It began right at the top with Lord Curzon, the Viceroy of India between 1899 and 1905. The colonial government’s concern over dwindling game encouraged a reform of shikar.

The changing discourses on shikar can help us locate the contest between colonial government and civilian interests. They can tell us how empire, through contests large and small, intensified its hold over sectors like forestry and wildlife management.[3] Shikar also witnessed its greatest rival at this time owing to the popularization of the camera, which enabled a new form of shooting without guns.

In 1901, Lord Curzon famously declined an invitation by the nawab of Junagadh to shoot lions in Gir. In December that same year, he mentioned it in his address to the Burma Game Preservation Association. Asiatic lions began to enjoy protection, with maharajahs carrying out a lion census and closing Gir to hunters. Thanks to these efforts, today in Gir around 500 lions continue to roam.

Tigers, on the other hand, had tougher luck. In the same address to the Burma Game Preservation Association, Lord Curzon further acknowledged the reduction in number of tigers as “not an unmixed blessing.”[4]Lord Curzon’s journal, sometimes with casual anecdotes, mentions his interests in shikar. In his two volume British Government in India (1925), while he assessed former Viceroy and Governor-Generals’ shikar activities, he wrote that it was only with modern day developments in the empire that a Viceroy could enjoy a well-organized shooting.[5]

Invited by the native princes, Lord Curzon hunted tigers in several princely states including Gwalior, Rewa, Hyderabad and Cooch Behar.  His penchant for tiger hunting was similar to that of the Prince of Wales (soon to be King George V), who had hunted extensively during his tour to India in 1875-76. Two extant photos of Curzon show him standing regally with a foot on a dead tiger.

Tiger hunting had become ever more elaborate and touristy by the end of the Victorian era. The sheer scale of preparations necessary before a hunt had made it costly to organize tiger hunts. Most hunting books advised their readers on financial preparation and proper methods of pursuit so as not to be harassed by dupes.[6]F. C. Hicks’s Forty Years Among Wild Animals in India, published in 1910, even systematized tiger-hunts and developed detailed theories to aid his readers. His aim was to minimize life risk and reduce financial strain on hunters to maximize return. Tiger-hunting had become a source of ancillary revenue for those who collaborated with the hunter. A European hunter, while filling his trophy bag, was supposed to manage a hunt well or else he would end up losing money.

The colonial government was also bent on earning from hunts. In the early twentieth century, E. P. Stebbing, an influential British forester and entomologist, campaigned for the need to systematize hunting in colonial forests through magazines like Bombay Natural History Journal. He suggested promulgation of elaborate game-protection laws, selling of game licenses and proper implementation of rules.[7]

But it was difficult to devise game laws that would work everywhere in a vast empire like India. Moreover, because of the presence of several princely states, not all of the nation’s forests were under British control. However, by the end of the First World War most of the princely states, sensing ancillary revenue, had devised game laws. For example, W. S. Burke’s The Indian Field Shikar Book (1920) began to compile the game laws in every Indian province in its appendix.

Returning to the RAMM tiger, perhaps the greatest hunt of the early decade of the twentieth century was in 1911 when King George V arrived in India for his Coronation in Durbar. He slayed 39 tigers and 18 rhinoceroses in Nepalese Terai.  In the years that followed, this hunt was celebrated in a series of albums and royal publications. A glimpse of the photographs from the royal album can tell you volumes about the magnitude of the hunt.[8]

The hunt proved so popular that the spectacle of tiger hunts began attracting movie companies. Hollywood film producers started mounting their cameras on elephant-back and braving the Indian climate to shoot tiger hunts.

Audiences couldn’t get enough. About the time the First World War began in 1914, Between Savage and Tiger became the first such sensational hit. The six-part movie, produced by George Kleine Attractions, featured “thrilling” tiger hunts in tropical forests and an intriguing triangular romance between the protagonist Ross, his wife, and a jealous native princess.[9]

In 1924, Herford Tynes Cowling (1890 – 1980) returned to America following his two-and-a-half-year journey around the world with a cine camera, recording approximately 150,000 miles of travel and 200,000 feet of film reel. During the course of his travels, Cowling shot lion hunts in Africa and tiger hunts in India.  A few months before he returned home, Cowling wrote about his experiences of shooting in India – how he mounted his cine camera on an elephant and, in twenty four hours, shot seven Bengal tigers with both camera and gun – a feat that earned him huge popularity among early travel filmmakers.[10]

Another famous traveller, George Miller  Dyott, followed in the footsteps of Cowling and shot his own tiger-hunting film in the late 1920s. During a widely publicized roadshow, it was advertised as an “all-taking adventure film.” The same year that Cowling was mounting his camera on Indian elephants, Joseph Henabery directed Tiger’s Claw (1924), a movie about an American engineer building a dam in India.

As the film opens, the engineer is wounded by a tiger and rescued by a half-caste woman, who nurses him to health. The film contains a number of spectacular episodes, where dams break, cattle run amok, and protagonists get attacked by tigers. 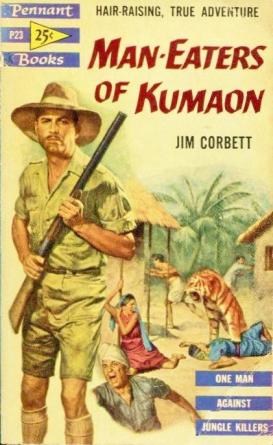 For another half century – until about 1972 when tiger hunting in India was banned – the fascination with tiger hunts continued to fuel a growing industry in India. Among the most popular, it produced dark, brooding stories of Jim Corbett, who left India after her independence. He morosely remembered his tiger-hunting days in his blood-curdling adventure titles like Man-Eaters of Kumaon (1944), The Temple Tiger and More Man-Eaters of Kumaon (1954) and The Man-Eating Leopard of Rudraprayag (1947).

Foreshadowing the 1972 ban, Corbett also became increasingly concerned about the survival of Bengal tigers as a species. He sensed the need to portray tigers as sentient creatures in need of protection. He wrote in his introduction to Man-Eaters of Kumaon that a tiger, unless it were a man-eater, was “a large-hearted gentleman with boundless courage.”[11]