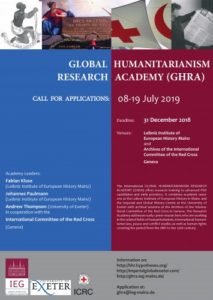 As in the last four years the GHRA received again a huge amount of applications from an extremely talented group of scholars from more than twenty different countries around the world. The selection committee considered each proposal carefully and has selected these participants for the GHRA 2019:

Maria Cullen is from Dublin and has a great interest in issues of global inequality and development, which is reflected in her studies and her undertaking of an internship with a local NGO in Rwanda last summer. She holds a BA in History and French from Trinity College Dublin and an MA in International Relations from UCD, which gave her an interesting interdisciplinary perspective. She subsequently decided to pursue her  interests further through a PhD in humanitarian history at NUI Galway, which she has now been working on since September 2018.

Mitchell Edwards is a third-year doctoral student in Northwestern University’s African History program. His interest in the continent’s past first developed during his undergraduate career, when he spent consecutive semesters participating in study abroad programs based in the Great Lakes region of East Africa. He has since taught ESL in South Korea, co-managed one of the abovementioned programs in Kigali, Rwanda, improved his comprehension of Swahili in rural Tanzania, and earned a Master’s degree in History from Concordia University in Montreal.

Ana Filipa Guardiao is a PhD candidate at the Lisbon University Institute for Social Sciences, within the Inter-University History Doctoral Program: Change and Continuity in a Global World and with a fellowship by the Portuguese Foundation for Science and Technology. Her dissertation focuses on the processes of humanitarian assistance to the autochthonous refugees from the independence wars of Kenya, Algeria and Angola. With a graduation in Political Science and International Relations and a MA in Political Science, she has participated in national and international research projects, congresses, workshops and publications focusing on political elites, human rights, sovereignty and decolonization processes.

Baher Ibrahim is a history PhD candidate in his third of four years at the University of Glasgow. He is a physician by training, and graduated from Alexandria University, Egypt in 2011. He has since taken time out of a clinical career for research and academia. He holds a MA in Community Psychology from the American University in Cairo, and a MSc in Global Mental Health from King’s College London and the London School of Hygiene and Tropical Medicine. His interests include refugee mental health, trauma, public health and medical humanitarianism.

Nadia Kornioti holds a Bachelor’s in Law (LLB) from the University of Leicester and a Master’s in Laws (LLM) with a specialisation in Public International Law from University College London (UCL). She is also a qualified advocate under Republic of Cyprus law. Following relevant work experience in Cyprus and abroad, she is currently a PhD student at the University of Central Lancashire (UCLan), based at the Cyprus Campus of the university, where she is also an Associate Lecturer. Her research is a legal-historical study on International Humanitarian Law, with an emphasis on common article 3 of the 1949 Geneva Conventions and the armed violence in Cyprus, in the period 1963-1971.

Adam Millar is a History PhD student at the University of Leicester, researching the Salvation Army’s overseas settlements and colonies across the British Empire, supervised by Professor Clare Anderson and Dr Zoe Groves. His research focuses on the Army’s migration and settlement schemes, farm colonies for settlers and indigenous communities, and prison-gate settlements. He previously studied at the University of Huddersfield, writing his MRes on the social history of Hudfam and humanitarianism in Huddersfield, supervised by Dr Rebecca Gill. He is currently writing an intellectual biography of Elizabeth Wilson (founder of Hudfam).

Bethany Rebisz is a second-year PhD student funded by the Arts and Humanities Research Council at the University’s of Reading and Exeter. She has a first-class honours degree and graduated with a Distinction for her Masters with both programmes being in history. During her previous degrees she specialised in the Mau Mau conflict fought in Kenya between 1952-60, largely focusing on the British counter-insurgency campaigns and their use of forced resettlement. Her key research interests focus on issues regarding race, gender, humanitarianism and social engineering in the context of modern colonial conflict in Africa.

Kyle Eulogio Romero is a sixth-year Ph.D. Candidate at Vanderbilt University working with Dr. Paul Kramer. He studies and teaches on the history of immigration, refugee politics, and humanitarianism in the twentieth century. His dissertation, “Moving People: Refugee Politics, Foreign Aid, and the Emergence of American Humanitarianism in the Twentieth Century” explores how U.S. institutions, policymakers, and foreign aid workers in the early twentieth century confronted global refugee crises and the techniques they used in response to displacement.

Michiko Suzuki received a PhD in History at SOAS University of London. She focused on modern Japanese and East Asian history. Her thesis investigated a historical paradox that defined the Japanese Red Cross Society of the interwar and wartime era. Michiko Suzuki is currently acting as a research assistant at the University of Tokyo. She has presented her papers at a number of high profile conferences such as the International Movement of the Red Cross and Red Crescent Conference on the Prohibition and Elimination of Nuclear Weapons in Nagasaki, Japan in 2017.

Stephen Westlake is a PhD Candidate at the University of Bristol. He is broadly interested in transnational and global approaches to British history in the post-war period. His research focuses on Britain’s position within key global networks of transnational broadcasting and humanitarian and human rights activism from the late 1960s onwards. His Ph.D project is provisionally entitled “The Oxfam of the Mind”? Britain, the BBC External Services, and the Benevolence of British Internationalism, 1965-1995.