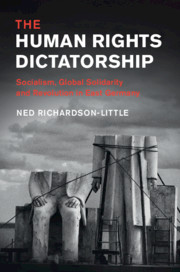 Ned Richardson-Little’s The Human Rights Dictatorship recovers the history of human rights within the German Democratic Republic (GDR). In doing so, he provocatively reinterprets the Cold War, the evolution of human rights in the Eastern Bloc, and the revolutions of 1989. The book provocatively shows how “human rights” had multiple meanings depending upon which side of the Cold War – and the Berlin Wall – you found yourself. Richardson-Little’s tracing of how the meaning of human rights evolved in the decades after the Second World War illuminates a global battleground of ideas that continued to be fought in Eastern Europe long after the tearing down of the Berlin Wall.

Dr Richardson-Little is a Freigeist Fellow at the University of Erfurt, Germany, where he leads a project on international crime and globalization. Before this, he was a postdoctoral fellow in the 1989 after 1989 research group (2014-18). He received the Fritz Stern Dissertation Prize from the German Historical Institute (Washington) and a commendation from the Fraenkel Prize committee at the Wiener Library. Academic publications include numerous chapters and journal articles, and the editing of a special issue of East Central Europe.  He has also written for the Imperial & Global Forum, and hosts a blog, History Ned. You can follow him on Twitter @HistoryNed.

How would you briefly summarize your book? Give us your “elevator pitch,” if you will.

The idea of human rights was crucial to the fall of the Berlin Wall and the collapse of state socialism in East Germany, but before that, it had also been a core part of communist ideology used to legitimize dictatorship. The ruling Socialist Unity Party (SED) came to see itself and the German Democratic Republic as a champion of human rights, both at home and around the world. The party even created a socialist version of Amnesty International to campaign on behalf of victims of human rights violations in West Germany and beyond. For dissident activists, creating a human rights movement wasn’t a matter of being inspired by the West, but reclaiming the idea of human rights from the state by demanding democracy and pluralism from within. The SED was able to use human rights politics to sustain power for decades, but once dissident groups succeeded in wresting it from the party, this accelerated the process of collapse leading to the fall of the Berlin Wall in 1989.

To what extent was your book influenced by your transatlantic jumps between Canada, the United States, England, Germany, and Eastern Europe? In other words, how did you decide to realize your book project and how has your international academic career informed your research?

The book originated with my PhD in the United States where I attended the University of North Carolina at Chapel Hill, but you are right in saying that it is a transatlantic production. As a doctoral student, I had the privilege to be part of the Berlin Program at the Free University and there was always an emphasis on trying to speak to both American-style big picture Cold War history as well as the extensive German scholarship on the particularities of GDR history. After I graduated, I worked at the University of Exeter as part of the “1989 after 1989” project with a great multinational team looking at globalization and the collapse of state socialism. It reoriented the perspective I had on the GDR, and led to a much greater emphasis on linkages between the Eastern Bloc and the Global South. Today, I’m teaching in the former GDR at the University of Erfurt, which used to be a socialist teacher’s college. Although it had always been my intention to respect the perspectives of the people I write about, actually living in the place itself and working with colleagues and students who grew in East Germany or the wake of its collapse really emphasized the need to explore and understand the varied and often unreconcilable narratives of those who experienced it personally.

Your book works through numerous key moments, from the GDR’s creation of a “human rights dictatorship” in the late 1940s to the 1975 Helsinki Accords to the fall of the Berlin Wall in November 1989. How did you decide upon your case studies?

The deciding factor in choosing these key moments was looking are where there was a shift in the language and how it was being used on the ground. There were periods of stability in the dynamics of human rights politics interrupted by regular shorter moments of radical evolution – a kind of evolutionary “punctuated equilibrium”. The Helsinki Accords loom large because they are given such prominence in much of the Cold War literature as the catalyst for East-West human rights politics. The Berlin Wall has also become a globally iconic moment for the victory of human rights. Beyond that, however, I wanted to focus on events that prompted innovative new uses of the idea of human rights, either by the state, the churches, or everyday East Germans. I wanted to really answer the question of why and how different groups of people turned to the idea of human rights as a political tool, either to bolster state power, or to rearrange it. For example, the national referendum held in 1968 on a new socialist constitution is not normally viewed as a major political event since its passage was a foregone conclusion. It did, however, prompt the first mass use of human rights by East Germans to demand political change when thousands of Christians wrote to the state demanding greater protections for religious freedoms.

You note how, after 1989, “many East German elites simply erased socialist human rights from their past.” Your recovery of it is all the more impressive as a result. How did you go about overcoming this problem of historical erasure?

The end of the GDR created an important break in how people conceived of themselves and understood their own careers. I found several memoirs where people re-wrote certain events by omitting the socialist aspects of human rights politics in a way that simplified the historical narrative and often helped the writer to look like they were on the right side of history. Suddenly every mention of human rights, even if it was in support of East German state policy, was turned into proof of dissent from the party line. I also had great difficulty in getting those who were involved in socialist human rights activism and academia in the GDR to speak with me and many key actors are deceased or very elderly.

Instead of trying to determine what people “really” thought about human rights, I decided to concentrate instead on digging up what they said and did before 1989. The analysis turned to the changing functions of human rights as an idea and as a political language, not a question of investigating subjective beliefs.

You write about how, over nearly half a century, East Germans “imagined, propagandised and instrumentalised human rights in the name of a multitude of shifting ideals: socialism, antifascism, Christianity, peace, the environment, democracy and ultimately – the creation of a unified German state.” Considering that this is for the Imperial & Global Forum, I wonder if you could briefly unpack – and disentangle – the book’s anti-imperial dimensions for our readers?

Due to East Germany’s position as a state unrecognized diplomatically outside of the socialist bloc, SED leaders had to start thinking globally about how to gain legitimacy. In terms of human rights, they first started locally, campaigning about imprisoned communists, but decolonization gave them a new international venue to pitch themselves as the better Germany.

East German intellectuals working on the problem of human rights picked up the rhetoric and legal claims of the emerging Afro-Asian bloc and its campaign to make self-determination central to the UN rights system. They claimed that the GDR was also a state fighting for its sovereignty and self-determination in the face of the imperialist West. In contrast to the Federal Republic, which had allied itself to dying colonial empires clinging to a racist international order, they argued that East Germany was a global force for human rights with interests aligned to those of the Global South.

What was your most surprising archival discovery?

Finding the “Socialist Declaration of Human Rights” that was written in the 1980s by a team of Eastern Bloc experts, but never publicly released as the drafters split between reformers and hardliners. My first time presenting at an academic conference, someone asked if such a project had ever taken place and a senior scholar on my panel confidently said it never did, and it would have been contrary to how the Eastern Bloc operated. I had just found the documents the week before so a lot of the surprise was actually retrospective when I discovered that this was something that should not exist. I think it was important in demonstrating that socialist intellectuals and elites still had global ambitions in the 1980s, even if those plans ultimately played into the disintegration of the Eastern Bloc.

Your book draws upon an impressive array of international archives. Upon reflection, what was the most challenging aspect of the research (accessing archives, etc.)?

Getting access to most of the files wasn’t a problem – the access to East German archives is actually easier than it is for West German files as I’m finding now in my new project. The biggest problem is that documents produced by the East German state and party apparatus often don’t say very much concretely. There is a lot of bureaucratic boilerplate and a strong emphasis on presenting consensus, so you rarely get a glimpse of how decisions were made, or if there was internal conflict and debate. For instance, I still have never found any documentation about the decision in 1959 to call a group campaigning for imprisoned communists “the Committee for the Protection of Human Rights.” Even those involved in the group had no explanation for the decision It took a lot of sifting through long descriptions of meetings to come across nuggets showing where key choices were made or where the language and ideas being used significantly changes.

If you could travel back in time, what advice would you give your graduate student self?

Make sure you don’t forget why your work could matter to people beyond your committee and other specialists. How you understand your potential audience is going to shape how you research and how you write – the most time-consuming part of the book process was reworking the text to make it more accessible to people who may know nothing at all about East Germany, but care about human rights, and vice-versa.

Your book is, to put it mildly, ambitious in its reconceptualization of the changing meaning of human rights, East German state socialism, and the global Cold War. What do you consider to be the book’s most significant historiographical intervention?

For me personally, I think it is about returning agency to East Germans in this story. Both state officials and ordinary citizens are often portrayed as totalitarian automatons driven by a fixed and unchanging ideology, which I think is a complete misrepresentation of what was happening on the ground. Doing so  brings to light the missing “other side” of the Cold War rivalry in terms of human rights – Eastern Bloc elites did not just passively blunder into their own downfall. This approach also recovers the intellectual and political creativity of dissidents in creating a new vision of human rights from the ground up for the democratization of the GDR.

What are you currently working on at the moment?

I’m currently working on Germany’s place in global networks of trafficking in the late 19th and early 20th century as well as its role in shaping the League of Nations’ international prohibition systems. It’s a fun change after years of reading Marxist-Leninist legal theory!