In November 2012, a slim majority of Puerto Ricans voted in favor of U.S. statehood. And within the last week, Dr. José M. Saldaña, former president of the University of Puerto Rico, and former mayor of San Juan, Hernán Padilla, each once again raised the call for Puerto Rican statehood. Yet modern-day remnants of the American Empire continue to trouble US relations with Puerto Rico, which still holds a semi-colonial American status. To give the issue some much-needed historical perspective, what follows is a revised version of an article that previously appeared in the History News Network and the Australian newspaper.

Burn your outdated American flags; make room for the fifty-first star on the star-spangled banner.

For the first time in Puerto Rico’s more than hundred-year history as an American territory, on Election Day in November 2012, a slim majority voted in favor of U.S. statehood in a non-binding referendum that now goes to the U.S. Congress.

Why this apparent about face?

Because of a weakening economy, a decreasing population, and because “the current relationship simply does not create the number of jobs that we need,” says Puerto Rican Secretary of State Kenneth McClintock.

As it stands, 58 percent of Puerto Ricans now live in the mainland United States. Puerto Rico’s four-million residents — the 42 percent remaining on the island — are American citizens but can’t vote in American elections. Such has been the status quo since 1917.

But all this could change if Puerto Rico becomes the fifty-first state of the Union.

Whatever the outcome, this historic moment deserves due attention. Instead, aside from a brief flurry of superficial analysis, the implications of Puerto Rico’s self-determinative vote have gone largely ignored.

We might easily blame American political ADD for such a short attention span. More uncomfortably, such an imperial absence of mind is also a garish reminder of how much Puerto Rico’s complicated, century-long, semi-colonial status has become an accepted part of the American subconscious.

So how did Puerto Rico’s ambiguous political status come about? 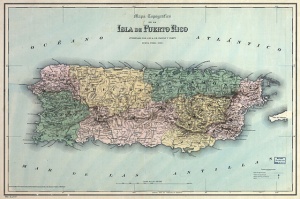 Put simply, in the wake of the Spanish-American War, Puerto Rico became an American colonial dependency, but one piece of a new American empire, acquired in what historian Robert Osgood once provocatively described as “a fit of absentmindedness.”

Republican President William McKinley famously led the nation to war against the Spanish Empire in 1898, caught up in the jingoism that gripped the American public following the mysterious sinking of the USS Maine in the Spanish-held harbor of Havana, Cuba.

Spanish defeat led to various American colonial acquisitions, among them de facto U.S. control of Cuba and de jure control of the Philippines and Puerto Rico.

Fascinatingly, the future of American imperial policy rested upon how it first treated Puerto Rico.

The McKinley administration’s actions toward Puerto Rico in 1900 therefore laid the groundwork for subsequent ad hoc American imperial policies toward its other colonial acquisitions. As the pro-imperial American Economist described in 1900: “No question that has been before Congress during … any recent session has caused greater interest among the leaders of both parties” than how the United States would deal with Puerto Rico.

McKinley had at first favored a liberal trade policy, to fiscally treat Puerto Rico “like Oklahoma and Alaska.” But the Republican administration quickly reversed this decision upon the realization that such a precedent would play out throughout the new colonies, including in Cuba and the Philippines.

A combination of economic and xenophobic fears over direct competition with Cuban sugar growers, “shrewd, cheap” Filipino labor, and a potential deluge of exports and Asian immigration to the United States curtailed this more liberal economic approach toward Puerto Rico. As a spokesman for the McKinley Administration put it: “He don’t want any legislation for Puerto Rico that will keep us from legislating for Manila.”

The McKinley administration therefore ignored various American and Puerto Rican calls for equal treatment and instead instituted a protective tariff policy upon Puerto Rican goods imported into the United States.

Impotent American anti-imperialists promptly condemned this decision to treat Puerto Rico “in a manner different from … an organized Territory of the United States,” calling it “the entering wedge of ‘imperialism.’”

Puerto Rico and the Insular Cases

The Supreme Court’s legal decision in Downes v. Bidwell (1901) became the first of the now-infamous Insular Cases. By allowing McKinley and Congress to implement protective tariffs upon Puerto Rican goods rather than granting them free access to the American market, the decision “decreed” that the Constitution “does not follow the flag.”

In The “Insular Cases” and the Emergence of American Empire, Bartholomew Sparrow has reminded us how the Supreme Court’s decisions had long-lasting ramifications for American imperialism. As late as 1922, in Balzac v. Porto Rico, the Supreme Court held that Puerto Ricans, while U.S. citizens, were not guaranteed the rights of the U.S. Constitution.

“The United States is in clear violation of not only the Constitution but also the treaties that we have entered into which are of course the law of the land,” Judge Juan Torruella, the first Puerto Rican to be appointed to a federal appellate court, has reproachfully observed.

If the Insular Cases still aren’t ringing any bells, they should: they recently played a crucial role in dealing with detainees held in U.S. military detention in Guantanamo Bay after September 11; and to this day they are still used to deny Puerto Ricans constitutional rights guaranteed to the rest of American citizens — which brings us back to the topic at hand.

Twenty-First-Century Shadows of the American Empire

In fits and starts in the decades since it became incorporated within the American Empire, Puerto Rico has admittedly gained a modicum of autonomy over local affairs: but not over foreign policy, let alone the ability to vote in federal elections.

And so Puerto Rico has remained a phantom limb of the American body politic — not quite an American state, not quite a U.S. colony, and not quite a sovereign nation. “The kind of imperial colonial status created at the turn of the century has never been eradicated,” notes Roger Smith, a professor of political science at the University of Pennsylvania.

And, while the recent and remarkable Puerto Rican election results appear to represent a majority vote in favor of statehood, sizeable hurdles yet remain.

The biggest impediment will be the U.S. Congress, which now gets to determine Puerto Rico’s fate.

While President Obama states he is “committed … that the question of political status is a matter of self-determination for the people of Puerto Rico,” it looks very unlikely that the Republican-controlled House of Representatives will agree.

Republican politicians have long opposed such a development. You see, Puerto Ricans living in the United States overwhelmingly vote Democratic, and the political parties in Puerto Rico invariably are “one shade of Democrat or another,” John Hudak of the Brookings Institute points out.

Thus, if Puerto Rico were to become a U.S. state, it would likely mean that the Democrats would gain a half-dozen voting members in the House and — more importantly — two senators.

One can imagine the reactionary Republican response to such a sizeable political reorientation.

In 2010, for instance, HR 2499, a.k.a. “The Puerto Rico Democracy Act,” was put before Congress and would have granted statehood to Puerto Rico if its people so desired. Considering the political ramifications at stake, the then Democratic-controlled House voted in favor, but lacked the necessary votes in the Senate, where it was duly quashed.

Even before the senatorial verdict against Puerto Rican statehood was in, Glenn Beck was at his chalkboard at Fox News. On April 28, 2010, Beck ran an entire episode dedicated to the issue, outlining a vast conspiracy theory. Amid his mockery of self-determination, democracy, and freedom, and a tossing in of some quick comparisons between Obama and Hitler, Beck then asked if “something else is going on. … why is all this happening?”

Unsurprisingly, Beck had the answer to his own paranoid question. First, he explained, the Democrats “need somebody to call racist” in order to accomplish what “the Democrats have already done with the African American vote.” Bringing in so many new Latino votes was but the latest phase of “the fundamental transformation of America,” a fantastic scenario that would be coupled with universal suffrage for illegal immigrants and convicted criminals.

Beck thus claimed to have discovered behind Puerto Rican statehood a vast Progressive-Marxist plot to bring into the United States “more people who can vote for the Democratic Party,” and thereby maintain a socialist stranglehold over the United States for decades to come.

Such conspiratorial speculation continues to surround the issue following the Puerto Rican vote in late 2012.

As a result, Puerto Rican self-determination will doubtless take a back seat to predetermined, conspiracy-driven Republican political opposition. Such opposition is but a further reminder of the Caribbean territory’s long-time subordinate relationship to the United States.

But it is an ambiguous quasi-colonial status quo that could very well change in 2014 if the Democrats take back control of the House and garner a stronger majority in the Senate.

After more than a century of neglect, such a sizeable shakeup of the American political system might finally give Puerto Rico its due attention from an otherwise absentminded empire.