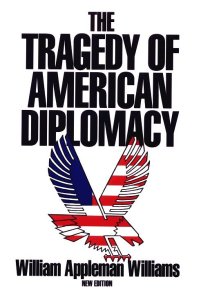 William Appleman Williams is considered the founder of the “strongly influential” Wisconsin School of U.S. foreign relations imperial history that took root from within the History Department at the University of Wisconsin, Madison. Williams’s book The Tragedy of American Diplomacy, first published in 1959, was the first of many revisionist imperial histories of American foreign policy that appeared amid what would become the broader radical New Left movement.

Beginning with Tragedy, Wisconsin-School-inspired revisionist histories suggest that, owing to the distinctive nature of American capitalism, imperial presidents embarked upon a bipartisan quest for foreign markets with broad business and agrarian support, culminating in the acquisition of both a formal and informal American empire. Williams termed it “Open Door imperialism,” an American manifestation of “the imperialism of free trade.”

In this episode of the Centre’s Talking Empire podcast series, hosted by Professor Richard Toye, I discuss the significant historiographical influence of Tragedy, particularly how it and subsequent New Left imperial revisionist histories helped overturn longstanding conceptions of American imperial expansion. As a result, The Tragedy of American Diplomacy continues to retain a dominant position within the study of American imperial history and historiography.

Episode 10: The Tragedy of American Diplomacy