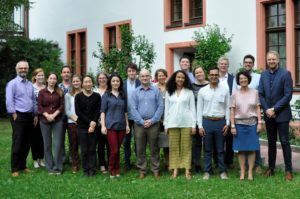 During Day Two, participants presented their own Ph.D. and Postdoc projects while getting constructive collective feedback. These projects showcased the richness of research currently undertaken by a new generation of academics who are set to make a critical contribution to the field. They included topics on the issues of convict servitude, morality, and the rise of humanitarianism in the Eighteenth-Century Anglo-American world (NICOLE DRESSLER); humanitarian action of the international Philhellenic movement in the 1820s (NATALIE KLEIN-KELLY); the Russian Empire’s humanitarian assistance to Armenian refugees at the Caucasus front during the Great War, 1914-1917 (ASYA DARBINYAN); aerial warfare and international law (LUIS PAULO BOGLIOLO); the history of colonial prisoners of war in Vichy France (SARAH FRANKS); the treatment of German prisoners of war in Canada, the United States and Great-Britain during the Second World War (JEAN-MICHEL TURCOTTE); US humanitarian aid in occupied Germany after 1945 (KAETE O’CONNELL); the shifting debates in the United States about foreign and humanitarian aid to child refugees, 1945–1989 (SHARON PARK); the global workings of disability and development in Tanzania and Congo, 1950-2000 (SAM DE SCHUTTER); the role of the International Committee of the Red Cross in North and South Yemen in 1960s (JIHANE CHEDOUKI); transnational human rights activism in West Germany emerging in the 1970s (FELIX A. JIMENEZ); the intellectual biography of David Owen regarding British human rights politics (DAVID GREALY); the development of the British medical humanitarian sector between 1988 and 2014 (JENNY CHAPMAN). The ensuing lively discussion was enriched by Professor ANDREAS GESTRICH, the Director of the German Historical Institute London and an important partner in the GHRA.

In the morning of Day Three, the leaders and participants of the GHRA offered the opportunity for individual tutorials. The proceedings continued with a talk by JEAN-LUC BLONDEL who until his retirement headed the Division Archives and Information Management at the ICRC. He had been an ICRC delegate since 1982 and a former regional delegate in Buenos Aires, special advisor to the ICRC president 2003-2008 and Director of the International Tracing Service (ITS) at Bad Arolsen in Germany. He presented valuable insights into the ICRC work and policies in the period from 1966-1975 based on his survey of the recently opened material from these years. The afternoon was reserved for the guest lecture by Professor MADELEINE HERREN (University of Basel), who presented an intriguing paper on her recent research project on  “Exchange ships: enemy aliens, repatriation and forced migration during World War II”. 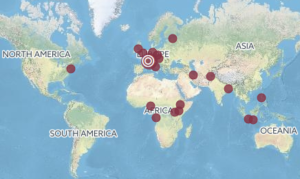 During Day Four & Five the GHRA worked on the Online Atlas on the History of Humanitarianism and Human Rights. This is an open access publication by the GHRA participants from successive years. The Online Atlas consists of an interactive world map displaying locations in Africa, America, Asia, Australia and Europe, where significant events took place and shaped the development of humanitarianism and human rights in a crucial way. The authors define key terms of both research fields and display the worldwide entanglement of various places across geographical borders and historical epochs. The Online Atlas addresses a broader public. It is a valuable resource for those engaged in the field of humanitarian action and human rights as well as students and academics.

Second Week: After the first week of intense academic training at the Leibniz Institute of European History in Mainz, the GHRA 2017 travelled for a week of research training and discussion with ICRC members to the Archives of the International Committee of the Red Cross in Geneva. The First Day at Geneva started with an introduction to the public archives and library resources by ICRC staff. MICHÈLE HOU, Deputy Head of Library and Public Archives welcomed the fellows. FABRIZIO BENSI, ICRC Archivist, explained the development of the holdings, particularly of the recently opened records from 1966–1975. MARINA MEIER (Film Archivist) and FANIA KHAN MOHAMMAD (Photo Archivist) then presented the superb collection of photographs and films in the ICRC Archives. Furthermore, SONIA CRENN introduced the Library with its encompassing publications on International Humanitarian Law, Human Rights, Humanitarian Action, international conflicts and crises. In the afternoon DANIEL PALMIERI, the Historical Research Officer at the ICRC, gave a lecture on the historical development of the ICRC since its foundation. 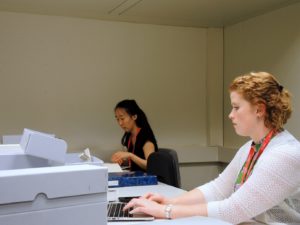 The morning of the Second Day was dedicated to a dialogue with ANDREAS WIGGER, former ICRC delegate and Deputy to the Director General from 2002 to 2004. He gave a presentation on his experiences during field assignments on ICRC missions in the Middle East, North Africa, South East Asia and the Balkans. After this intriguing dialogue, the GHRA fellows started to work intensively at the archives and library. The staff members assisted them fully in tracing holdings relevant for their individual Ph.D. and Postdoc research. The students discovered the rich material in documents and audio-visual record; some found huge amounts of new material and will certainly return. 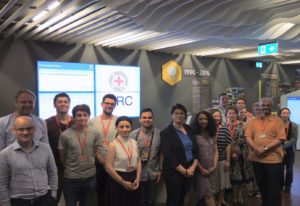 The Third Day started with a discussion with CHARLOTTE LINDSEY-CURTET, Director of Communication and Information Management at the ICRC, who in 2001 had produced the topical report Woman Facing War on the impact of armed conflict on women. She presented the challenges the ICRC is facing concerning its relations not only with the wider public and the press but also with the parties to conflicts. In the debate with the GHRA participants, it became clear that the long-term relations which the ICRC establishes in regions of crises makes historical knowledge and research highly relevant to humanitarian action today. The afternoon and the Fourth Day continued with further research time. 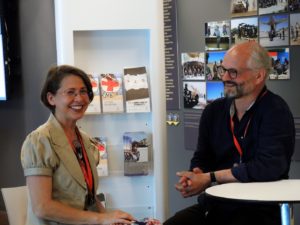 On the Fifth Day the GHRA concluded with a feedback discussion on the past two weeks and the achievement of the Global Humanitarianism Research Academy 2017. After two intensive and enjoyable weeks in Mainz and Geneva, the GHRA participants had to say good-bye but they will surely stay connected with each other and with the Research Academy. Their continued joint project is the Online Atlas of the History of Humanitarianism and Human Rights to which they will all submit an entry by the autumn.

The next GHRA will take place in from 9 July to 20 July 2018, its first week this time, like in 2016, at the University of Exeter and the second week again at the ICRC in Geneva. A Call for Application will be published in September this year on the blog Humanitarianism & Human Rights, the Imperial & Global Forum, and the GHRA Webpage.