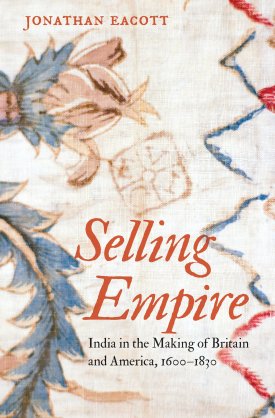 Jonathan Eacott’s Selling Empire: India in the Making of Britain and America, 1600– 1830 (2016) reinforces two important historiographical points. One is that, contrary to David Armitage’s insistence that ‘the emergence of the concept of the “British Empire” . . . was long drawn out, and only achieved by the late seventeenth century at the earliest’,[1] the English polity that later incorporated the kingdoms of Scotland and Ireland was consciously imperial as early as the late sixteenth century. The second is that Britain’s imperial efforts were, from the start, transoceanic in nature. On the latter point, Selling Empire breaks with the older historiographical trend of distinguishing between a ‘first’ and ‘second’ British Empire delineated by a late eighteenth-century ‘swing to the east’.[2] Instead, Eacott asks readers to consider ‘America the India’ as well as ‘India the place’, for it was the idea of India that ‘fostered, propelled, and supported English and British imperial expansion and power in America’ (1–3). Rather than ‘separate “worlds” of empire’, Eacott sees ‘the British empire in the world’ (7), an important shift in perspective that, along with other recent studies of the peripheries of Britain’s American empire,[3] will continue to push scholars of early modern British imperialism nearer towards contemporary interdisciplinary debates surrounding notions of indigeneity and the legacies of settler colonialism.[4] END_OF_DOCUMENT_TOKEN_TO_BE_REPLACED