Marvel’s blockbuster Black Panther, which recently became the first superhero drama to be nominated for a Best Picture Academy Award, takes place in the secret African Kingdom of Wakanda. The Black Panther, also known as T’Challa, rules over this imaginary empire – a refuge from the colonialists and capitalists who have historically impoverished the real continent of Africa.

But fans of the box-office hit might not realize that they don’t need to look to the make-believe world of the Black Panther to find a modern-day black kingdom that aspired to be a safe haven from racism and inequality.

The fictional kingdom has a real-life corollary in the historic Kingdom of Hayti, which existed as a sort of Wakanda of the Western Hemisphere from 1811 to 1820.

The Haitian Revolution led to the creation of the first free black state in the Americas. But the world was hardly expecting a former enslaved man named Henry Christophe to make himself the king of it.

Media accounts from the era, some of which I’ve collected in a digital archive, serve as a window into a brief period of time when the kingdom stood as a beacon of black freedom in a world of slavery. Yet, like Wakanda, the Kingdom of Hayti wasn’t a utopia for everyone. END_OF_DOCUMENT_TOKEN_TO_BE_REPLACED

From the centenary of the “humanitarian occupation” of Haiti to internationalizing the ruins of Palmyra, here are this week’s top picks in imperial and global history. END_OF_DOCUMENT_TOKEN_TO_BE_REPLACED

From the Mã Lai Origins of the Viet to the global war on blackness, here are this week’s top picks in imperial and global history. END_OF_DOCUMENT_TOKEN_TO_BE_REPLACED 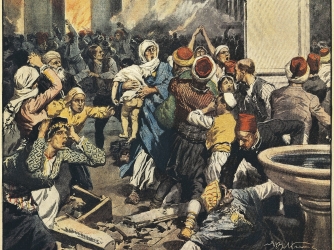 From covering up Soviet crimes to how the Vietnamese view the Vietnam War 40 years after, here are this week’s top picks in imperial and global history. END_OF_DOCUMENT_TOKEN_TO_BE_REPLACED